Destroy The Core by StabAlarash

[raw]
made by StabAlarash for LD28 (COMPO) 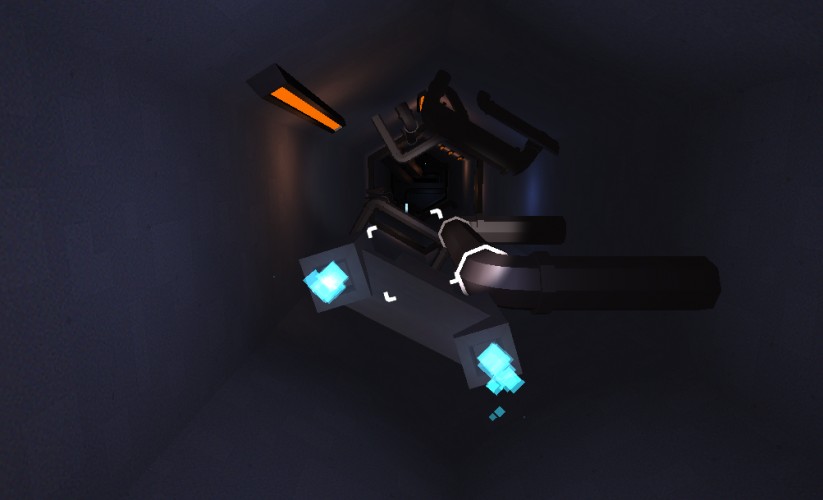 The evil Annilator Overlord want to delete the universe !!! You need to prevent him at all cost.
You're our last hope !!!

Post Compo Version: I fixed some of the problems you guys talked about in the comments, thanks for the feedback by the way :)
- Skippable intro
- The shooting seems to be better now
- Add a little portrait for the communication
- Auto fire
> NEXT IN RQUEUE

Nice work!
OriginalBigDan
16. Dec 2013 · 14:15 CET
I feel like you're on my wavelength! Maybe we've been watching the same movies or something?

I wonder if you tied the rotation of the ship into the camera, you might get something different. I love the gabble speak and I especially love that our endings both tie into the same thing!
Jhelle
16. Dec 2013 · 14:16 CET
Nice expansion on the endless runner genre. It gets tense very quick and the ship controls good :). Disliked having to go through the intro which didn't really add much
plancien
16. Dec 2013 · 14:17 CET
Very well executed. The controls are neat ! The intro is soooo effective, with the entrance getting closer (at first we don't see it), with perfect timing.
Maybe a bit difficult, it's more fore experienced gamers.
Waynetron
16. Dec 2013 · 14:23 CET
Waiting out the tutorial after dying is sooo frustrating.

The chatter audio at the start also made me laugh out loud when I heard it the first time.
Arowx
16. Dec 2013 · 14:26 CET
Great little game. Keep working on this it's great! You might want to add camera roll when the ship turns, a way to speed up and slow down and a constant fire mode to save on the fingers.
Msquirrel
16. Dec 2013 · 14:54 CET
Very Very good. Great art, Great execution, great idea.
ian_snyder
16. Dec 2013 · 14:57 CET
Wow, this is my favorite entry so far. Great polish, fun gameplay. I really love the Star Fox vibe with the art and sounds. Definitely make the intro skippable, though! And add a little portrait of the dude talking ;)
Hemuuuli
16. Dec 2013 · 14:59 CET
This ship blocks the view so it it hard to see sometimes what lies ahead. Otherwise super cool game!
chicknstu
16. Dec 2013 · 15:01 CET
Wow. Amazing quality for a 48 hour jam!

The only thing that lets it down is that there's no checkpoint system, coupled with this huge intro at the start which means you effectively have a 30 second waiting time between goes.

Seriously impressed anyway though. Good work. :)
Kep
16. Dec 2013 · 15:09 CET
Nice work. I like how all of the graphics match in a low-poly cubist style. Even small things like the thruster fire.

The tunnel was less random than I was expecting.
The camera could be attached to the ship so the tunnel rolls instead.
I probably spent just as much time in the dialog as in the tunnel... respawn should be at tunnel entrance. I still liked the game enough to wait through it several times.

Overall a very nice job. Keep up the good work!
Manou
16. Dec 2013 · 15:27 CET
5 stars
adnzzzzZ
16. Dec 2013 · 15:40 CET
Really nice job. Everything feels really responsive and smooth. Could have used a way to skip the introduction after you died every time, but other than that really solid game. Good job!
LatFoued
16. Dec 2013 · 15:42 CET
Absolutly fantastic, the gameplay was hard to grab at first but then it's just awesomeness. Fun and hard = enjoyable, the only thing i didn't like is the long intro especially if you die a few times.
X-0r
16. Dec 2013 · 15:49 CET
Reminds me of the good old death star II attack :P
Great graphics and lighting! Movement was okay, but... the "crosshair" was quite useless - probably, because the camera was slightly pointing downwards. (as much as "down" exists in space) I'm not suggesting to put the camera right behind the ship, it would only block the view and you'd only see the engines, but adding a second crosshair at a different depth would make it easier to predict, where the shots are actually going :)
BTW, huge plus for the intro, especially the part, when you approach the entry point, and your headlights fade in :)
burgerdare
16. Dec 2013 · 15:50 CET
very tense and enjoyable, but a skip feature would be appreciated for the introduction. It's a bit lengthy when you just want to take another try.
still very cool, though.
archaeometrician
16. Dec 2013 · 16:52 CET
Wow ! Great work. our game is impressive ! The artwork, the difficulty, the gameplay, everything is right. Awesome !
Fadobo
16. Dec 2013 · 17:27 CET
Great game, really intense. Reminds me of the last level of Starfox. Aiming seems a bit off though.
SilentBunny
16. Dec 2013 · 17:31 CET
The dialog sound is very attractive
Lustdante
16. Dec 2013 · 17:37 CET
The most thrilling entry so far. I got all of my senses put to the test there.
Jack Zackowitz
16. Dec 2013 · 18:23 CET
Awesome stuff. My only gripe is that the tutorial gets annoying after each time you die. Didn't pick up on much of the theme though...
midgard
16. Dec 2013 · 18:38 CET
WOW! It's just so cool, you surprised me that I opened my mouth at the start, so hyped!
Atmospherium
16. Dec 2013 · 18:39 CET
I always like these kinds of games, and you did a really good job executing. Nice lighting effects and nice overall design. The controls weren't exactly what I wanted, but they were definitely usable. I really hope you take the time after LD to develop this further and add more polish.
ThatGuy
16. Dec 2013 · 18:50 CET
Very fun and nice solid controls (though auto-fire would be nice). Very well done!
nerial
16. Dec 2013 · 19:10 CET
Love the sound effects. Legendary.
jillytot
16. Dec 2013 · 20:03 CET
Pretty fantastic.
phi6
16. Dec 2013 · 20:32 CET
The only game so far to make me laugh - those ridiculous voices haha!

The game is quite difficult, which would have been totally fine, except that every time I die I have to sit through an extremely long introduction all over again!

I wanted to replay over and over, but I very quickly lost heart. I was there slamming buttons on my keyboard and mouse to skip the intro, but nothing seemed to work. It actually made me angry that I couldn't enjoy more of your game.

I suggest that no more than 4-5 seconds should stand between game over and the ship flying into the hole again. If it was me, I would have picked 2 seconds. I would have played easily 10x as long, but it felt like more than half my experience was the intro screen over and over. (Yes that means I suck at the game, but you didn't let me learn without brutal punishment.)

Other than this your game is totally awesome, with mood and sound and graphics and tight control and good difficulty all wrapped in a cool idea... I've rated it quite highly but your fun score did get a ding.

- I felt that my own ship blocked my view. This was never actually a problem, but I felt apprehensive that it would be one. Sometimes I rolled just to have a look around.

- Having to click again and again to shoot is a bit of a problem, since your game requires precision mouse control and hammering the button might introduce little inaccuracies in the movement control. But holding the button down to perma-fire the entire game is not appealing either. There must be some happy middle ground, such as firing 4 rapid shots with each click or something.