You only get one COLOUR by soy_yuma 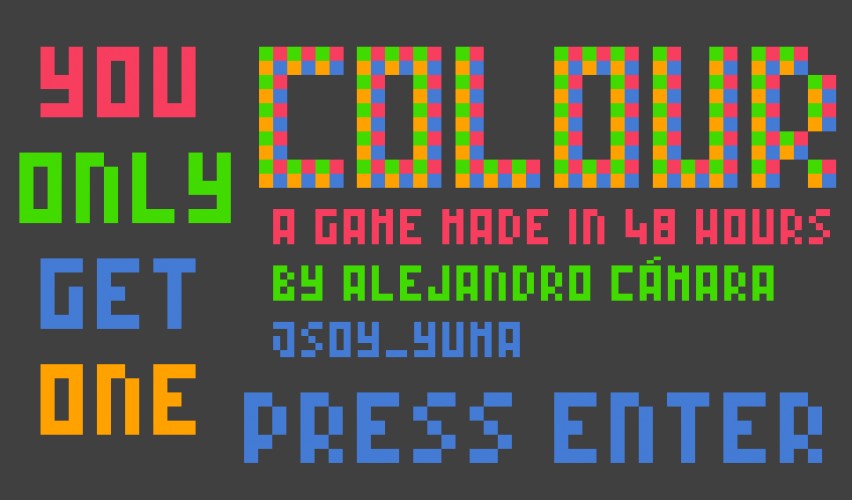 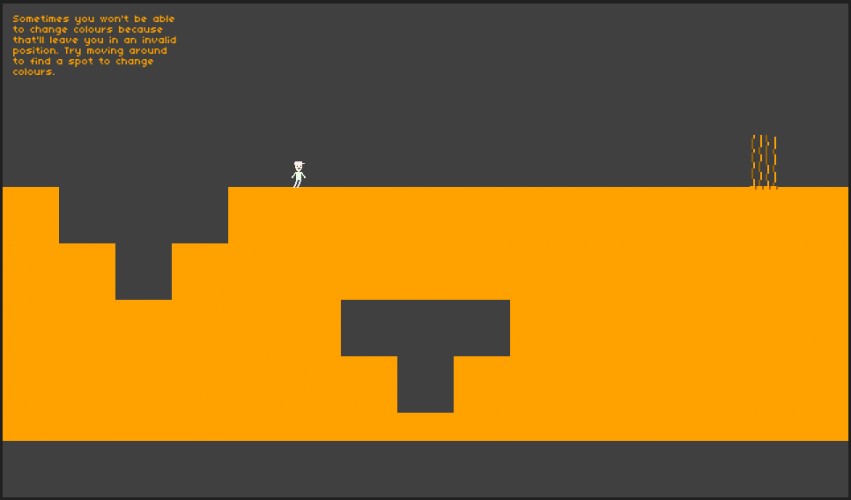 You only get one COLOUR!

Goal:
Get to the portal at the end of the level.

Gets difficult, or that could be my rubbish memory holding me back.
soy_yuma
16. Dec 2013 · 21:31 CET
Holy guacamole! I didn't expect so many comments! I love that you liked it!

@Miltage: I used to jump and then quickly change colours to peek the next step. After some hours of debugging I got quite well at it!

@Tsumei: I didn't have time to improve the graphics :( Also, I'm terrible (as in really really bad) at it.

@background_nose: sfx are my voice and a mic, lol. I didn't have time to make a longer loop for the music. I've to find more time for next LD!

I'll try to upload the timelapse + facelapse as soon as possible!
KHANanaphone
17. Dec 2013 · 00:55 CET
i think if you're making a puzzle game like this, you have to be careful that the hard part isn't the platforming. Like, I'll have the level "figured out", but it still takes me 5 minutes because I'll keep missing jumps.
Zemmi
17. Dec 2013 · 00:58 CET
Great entry, quite fun and I loved the sound effects "bo, be, ba, beh". Always tried making little ditties at the level starts by switching colours. Personally I found the platforming too finicky on Neil Gagarin, couldn't make that jump to and from the single green for the life of me. But then again my platforming skills be weak.
soy_yuma
17. Dec 2013 · 01:18 CET
In some cases I wanted it to be easy to figure out, but difficult to pass. Sometimes the levels try to resonate with the narration.

But it's true that the difficulty curve is not nice. Some levels are complicated and may end up frustrating.
AmmarAlsharekh
17. Dec 2013 · 01:37 CET
Very innovative game. I like it
Diptoman
17. Dec 2013 · 08:13 CET
This is neat!
Some animation on the main character would have been even better.
One other annoying thing is that you have no idea which position is free and which is not so you have to keep pressing the keys to check, some indicator may have been nice. But overall, good one!
Hypnohustla
17. Dec 2013 · 17:25 CET
Fun platformer with a nice puzzle mechanic. :) Some of the levels were a bit too much trial and error to my taste but I still enjoyed playing it. Loved the minimal audio :)
Xaychru04
17. Dec 2013 · 17:52 CET
Haha, hilarous sound effects! The concept is simple, but clever, and the story was nice too. Pretty relaxing game, I enjoyed it! :D
kalth.streil
17. Dec 2013 · 19:21 CET
Quite original :) The theme presence is quite obvious, and it's quite fun.

Just a bit frustrated about it having no sound and not having any kind of UI which shows the current colour number, since I kept pressing the button just to remember it!
dekart
17. Dec 2013 · 19:25 CET
I like the idea, but too soon it becomes kinda hard to play because of lack of clues and necessity to repeat the same path again and again
AdventureIslands
17. Dec 2013 · 19:30 CET
Great game! I liked the color switching gameplay even if it got damn hard on some places like the moon one. I really enjoyed this game overall, nice work.
kalth.streil
17. Dec 2013 · 23:46 CET
Oops! Sorry, it DID have sound. My mistake, I accidentally muted Chrome :(

Sadly, the sound makes the whole experience more depressing. But I guess that's in the mood, so kudos for that :D
dalbinblue
18. Dec 2013 · 00:28 CET
Reminds me a lot of mighty flip champs except that you have more freedom to switch between any plane instead of having a set order. Also a nice story to go with it; I found myself narrating it in a poor english accent a la Thomas Was Alone. Cool puzzle game, though some of the levels with tiny platforms mid-shifting was really frustrating.
soy_yuma
18. Dec 2013 · 01:39 CET
The level design requires some major polishing. Sorry for the exceeding frustration :<

@dalbinblue I'm glad you narrated in a poor English accent! That's what would have happened if I would had made the voices for the text :-)
Coin Flip Games
18. Dec 2013 · 02:20 CET
Really good game. It actually reminds me of a game that won the last game jam I participated in.
mrjordan
18. Dec 2013 · 08:11 CET
Loved it a lot! Would have loved it even more with different jump physics, but this is a really great concept and I didn't have much trouble moving around.
lorniebear
18. Dec 2013 · 08:56 CET
Really hard, still wanna keep playing!
Team-KwaKwa
18. Dec 2013 · 12:30 CET
I loved the mechanic, the level design was not perfect, but still it has potential. The music is quite repetitive.
Pixelulsar
18. Dec 2013 · 23:40 CET
All around a cool game, I liked it.
JordanFitz
19. Dec 2013 · 00:16 CET
Very concept. Much entertainment, wow.
allinlabs
19. Dec 2013 · 00:38 CET
Hi, I'm the guy who made a game similar to yours, Thanks for your comments ! :)
I actually really like your level design, especially the tutorials one, I think it's better than in my game. For example, the ones with positive/negative spaces are a great idea (tutorial 4 if I remember correctly). We should merge our games :D
I also like your peaceful and ambient music that goes well with the game.
CarbonCoder
19. Dec 2013 · 00:55 CET
I love the music! Cool gameplay!
AlexVsCoding
19. Dec 2013 · 01:04 CET
1. Got to say, the thing that really sells the game to me, as basic as they are is the sound effects. They're hilarious!! Reminds me of the robot noises my Grandad used to make when I'd poke the different moles on his face.
2. I like the feeling on jumping and quickly hammering through the different options to find the right answer - a definite thrill to that, I found the sahara level the most enjoyable for that.
3. The level about going to different planets finished me off - ended up spamming the keys in frustration. Feel that the difficulty curve on that level was way too steep.
4. Nice story to it - there if you want it but not shoved in your face so you can immerse yourself in it or just focus on the puzzle.
5. Would love to see what the community could do with a level editor for this. If you've seen the game TimeFukc the level editor for that adds a whole new dimension to that game (I know I know, 48 hours).
6. The controls did feel a little sticky at times - there were points where I'd switch colour and the accompanying key I'd pressed to move in a certain direction would keep applying (e.g. would continue moving left past where I wanted to land. This on the levels later on which required absolute accuracy this had enough of an effect on gameplay to make me quit.
7. What would be nice for the less experienced player would be to for every time they fail, increase the saturation of the background for that level, so when people are really getting screwed over they can see what the next colour needed to be. I found it very difficult co-ordinating between the colour choice and the jumping simultaneously so maybe having this as a basic aid would still require the player to choose the right colour but with an idea of what's coming next. Then once you've completed the level you could set that saturation back to zero so no indication is given.