[raw]
made by dalbinblue for LD28 (COMPO) 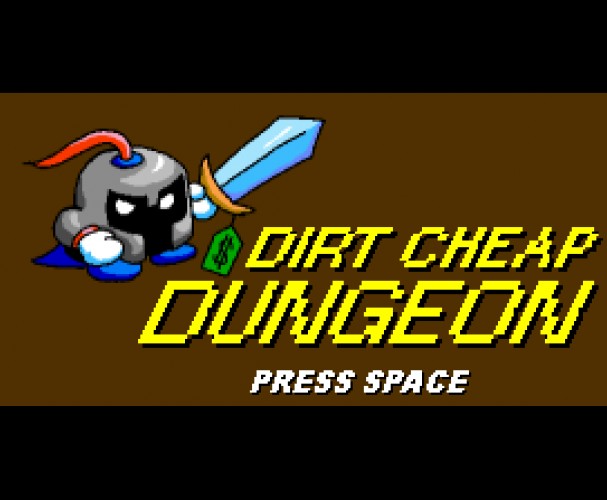 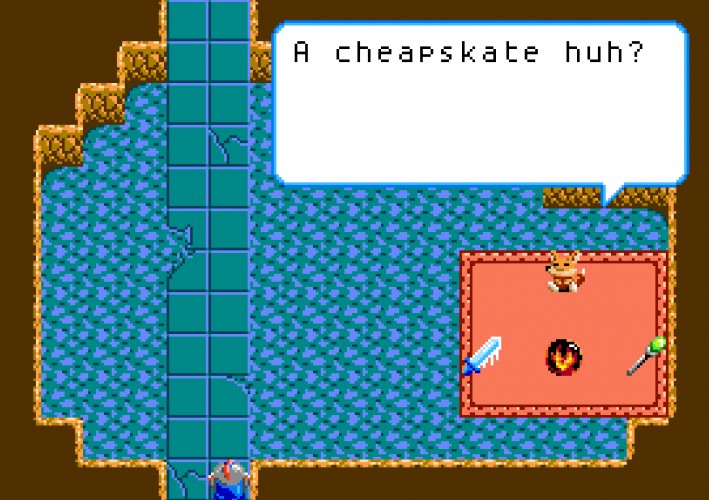 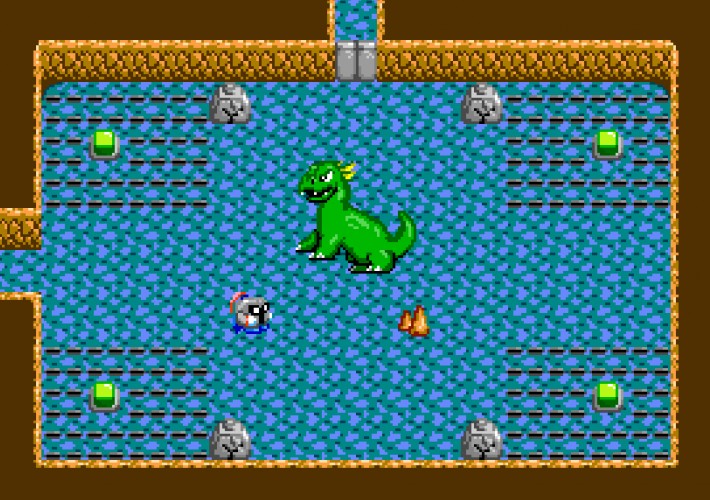 You have come to the lair of the fearsome monster that took from you something dear to you a long time ago. You are here to take your revenge, and armed with your... your... What, you forgot everything? Lucky for you there is a merchant near by for just an eventuality. Too bad dungeoneering hasn't been that lucrative as of late.

Explore the dungeon and get back what you have lost!

Made in XNA and .NET 4.0. To run, unzip and run the included executable. You will need XNA installed. There is a link above for the redistributable if you need it.

Edit: Fixed a game break bug where knock back from an attach can embed the player of a monster in a wall.

Edit x2: Hopefully fixed game crash when playing music on a DRM error with MP3s. Swapped to a different file format for music.

Also hints:
- Not all paths can be taken by all weapons
- There are five health up items hidden in the game, you can get to all of them with any weapon
- There is a hidden room
> NEXT IN RQUEUE

I wish my character's direction could be changed mid-movement. For some reason, if I hold down a key and press another he keeps walking in the old one. That's a minor thing, though. Overall, good work!
Tym0r
16. Dec 2013 · 04:29 CET
i really enjoyed it. quite good overall! Unfortunatly i pushed an one-eyed enemy out of the (locked) room where he was unreachable to kill.
Senevri
16. Dec 2013 · 04:36 CET
Crashes when pressing spacebar.
Kep
16. Dec 2013 · 05:02 CET
Impressive amount of work done over the weekend. Well done.
You probably know you can push guys through walls. That's the biggest problem I've seen, and all things considered, that is great news.
Keep up the good work!
dalbinblue
16. Dec 2013 · 05:08 CET
@Tym0r and @Kep, I'll take a look at he knock-back logic.

@Senevri, did you get a specific error? What locality is your machine in case that's the issue (I've had those problems before).
madmaw
16. Dec 2013 · 05:14 CET
Great level design
mcapraro
16. Dec 2013 · 05:50 CET
would love to see a web or osx version
ehtd
16. Dec 2013 · 06:45 CET
Main characters reminds me of Lolo from the NES. Had fun!
SonnyBone
16. Dec 2013 · 07:06 CET
Oooooh! I like a lot of what you have going on here. I especially love that shopkeeper sprite. HOLY CRAP! The neat little weapon swap mechanic (lol at the restocking fee) and the different uses. Some of the puzzles were really well done, too. As usual, you packed a lot of variety into the sprites.

Now for a few issues I had. Not major, but your slime sprite seemed to have a kind of box around it. No other sprite looked like that, so I'm guessing it's an odd sprite sheet miscalculation somewhere or maybe it's just my machine.

Also, the slimes were oddly tough to kill due to the player's hitbox or maybe it's the sword swipe hitbox being too small or something?

And I found a bug that caused me to have to restart. In the room with all the little blue squid thingies where you have to kill them to open the door at the bottom, I stayed in the doorway and killed a few baddies before going in. When I went into the room, the doors locked behind me and then I killed them all and the doors didn't open. So I guess it didn't register the kills because I did them in the doorway before the room locked?

The music is great, the spriting is really consistent and imaginative, and the core mechanic is really solid. Your approach to the theme was very entertaining. Great game as usual!
dalbinblue
16. Dec 2013 · 07:49 CET
@SonnyBone, thanks for the really detailed feedback! The bug with the doorways is interesting. The way it works is it calculates each frame if there are any enemies in the list or room actors and swaps state as appropriate. The first thing that came to mind is that you glitched an enemy through the wall so that you couldn't kill him. If that's the case I think I got that fixed, but if not, I may have more to look in to.

@ehtd I will admit that I did look at the sprites from Lolo and a dozen other games for inspiration and some animation guides.
kirbytails7
16. Dec 2013 · 07:58 CET
I got a crash on hitting space the first time. Opening the debugger, I got an error that song playback failed because the song might be DRM protected, or something to that extent.
Darkcoder
16. Dec 2013 · 08:12 CET
Cool game. I noticed that when changing rooms the rocks and enemies disappear, but the hidden items remain, so it's possible to spot where they are by changing rooms.
dalbinblue
16. Dec 2013 · 08:22 CET
@kirbytails7, thanks for the information. The song was an MP3 file, so there may be a codec issue. I switched back to just a plain wav file (it's still a small download).

@Darkcoder That issue is because of how I handled objects that reset and objects that have a permanent state in the game. I unload sprites for temporary objects when you leave the room, but also before the camera pan is performed. I can probably fix it in 10 minutes or so by attaching to the camera move complete event instead of at the initial loading of the room, but it's not a game crasher so it would not be in the spirit of LD to make that kind of change after the deadline.
auto_suggestion
16. Dec 2013 · 17:50 CET
Solid game! Well done on staying true to the theme, it's certainly appropriate. The game rewards me when I've done something right, and whenever I don't feel rewarded, it's my fault. That's a good sign. Engaging, challenging, charming!
Pantzar
16. Dec 2013 · 19:24 CET
This was a very fun game. Love the pixel art, and every room felt well planned.
@TeddyNashor
17. Dec 2013 · 00:27 CET
wow, impressive submission! great soundtrack too? what did you make it in?
Eric
17. Dec 2013 · 00:29 CET
Love the art! took me a while to get the theme aspect XD
Ashedragon
17. Dec 2013 · 00:33 CET
I thought it was really fun, good job!
dalbinblue
17. Dec 2013 · 00:40 CET
@TeddyNashor I used Famitracker to make the music. It replicates the NES sound chip which is about as complex of a music composition as I can get my head around.
01010111
17. Dec 2013 · 01:11 CET
Cool game, love the graphics, the fox merchant is super cute!
Lissar
17. Dec 2013 · 23:57 CET
Nice Zelda-like with appropriately retro graphics that I quite enjoyed!
pele
18. Dec 2013 · 05:10 CET
This could easily pass as a SNES game, very decent pixel art, it all fit in very nicely. The level design is awesome, congratulations!
louis.denizet
18. Dec 2013 · 08:40 CET
Simple but nicely done =)
MRvanderPants
18. Dec 2013 · 08:41 CET
I really liked the retro feel of this game. Gameplay was a bit weird thou.
kutullu
18. Dec 2013 · 10:07 CET
Awesome achievement given the timeframe! Fantastic art as well. Really polished entry. Add a bit more content and I would gladly pay for this. :D
Cheers, Marcus
Sylence
18. Dec 2013 · 13:33 CET
This is so great. Awesome graphics and gameplay.
soy_yuma
20. Dec 2013 · 22:38 CET
Good game! I found that damaging with the bomb is a bit complicated, except when it's you. Then it works fine :-) I'm too clumsy...
lordjosephdeburg
21. Dec 2013 · 21:42 CET
I love the use of different weapons and branching dungeon demanding on what you do. Very well made and good fun dalbin.
Azzar
23. Dec 2013 · 14:41 CET
I love it. It captures the look and feel of classic games perfectly and provides enjoyable and challenging gameplay
pjchardt
30. Dec 2013 · 03:59 CET
Nice! I am a sucker for an old zelda-like. The controls felt a bit stiff though. Lost a lot of health by accidentally moving to far, not enough or trouble turning. Impressive work for 48 hours. Nice experience!