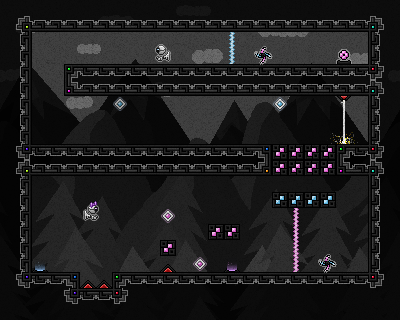 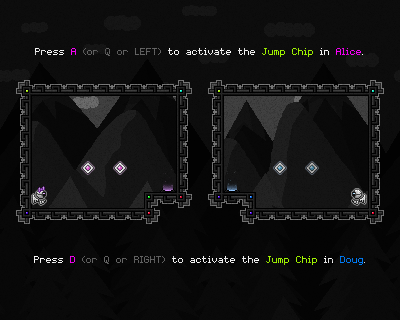 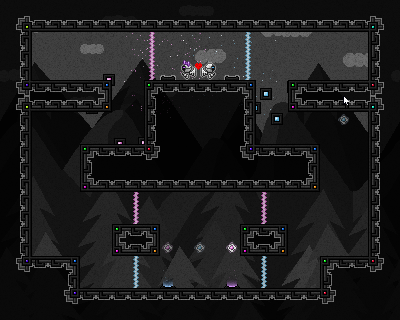 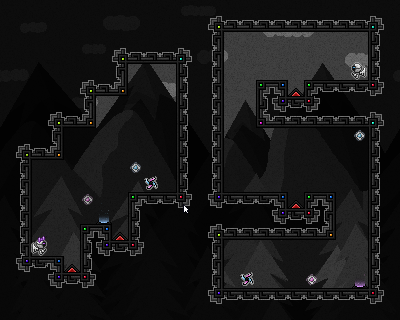 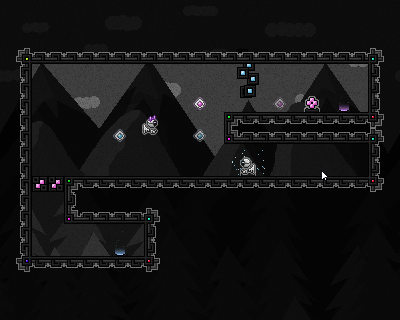 If you were given robots and could only choose one action that they could perform, what would you choose?

Jump, jump, and jump your way to victory through a variety of levels as you explore the source of robot affection.

Be warned, if you expect to win, you'll need to remember to make a *boop* noise every time the bots touch. It's absolutely mandatory. No exceptions.

PS. If you find the final level too hard, press L and F at the same time to blow that bastard up.
> NEXT IN RQUEUE

The initial idea was quite inovative. It took me a while to get used to control both robots at the same time, but it was an enjoyable experience.

Then you throw it away in the middle of the game, and it is a regular platform jumper again. I'm not really sure I liked that bit. Also, because of the difficulty, the music starts grating on after a while.

Small bug: You can use the laser chip on the level BEFORE they tell you you can use it.

Cheers!
Piat
16. Dec 2013 · 06:24 CET
Dat asymmetrical game play. More than my mind can grasp. Amazing style and audio. Very clean for 48 hours.
Somfunambulist
16. Dec 2013 · 06:28 CET
Really great gameplay, sweet graphics
Dooleus
16. Dec 2013 · 06:35 CET
I loved the first half - the concept was fresh and fun to wrap my brain around, and when the difficulty increased adding a second player helped smooth it out. When the second player gets removed, though, and it switches to a traditional platformer, it lost its charm for me. I tried far too many times to beat the killbot (or whatever) level - not out of enjoyment, just because I wanted closure on the story.

Really nice visuals and the first half felt very cool, and though I was disappointed that it switched to the standard platformer format halfway through, the levels were still well-designed. The sound effects are good, but the music is too repetitive.

Multitasking is tough :p
ACE
17. Dec 2013 · 08:27 CET
Awesome concept, great design. Very challenging as well
Ekilibr
17. Dec 2013 · 09:41 CET
Nice entry ! Liked it but as burgerdare said, it's "easy to forget who is left and who is right".
fued
17. Dec 2013 · 10:07 CET
incredibly polished... you sure it was only made in one weekend? lol
Daniel Debert
17. Dec 2013 · 10:57 CET
The game levels wasn't made to teach players how to play. It was just like saying "go play them".
TinyMoonStudios
17. Dec 2013 · 11:04 CET
Fairly challenging but new gameplay with a nice artstyle and level tone. Good job, arkeus looking forward to your next jam game!
kutullu
17. Dec 2013 · 11:07 CET
Spend way more time with this than I expected. Later stages get really hard! :D
Great game, you should really expand on this! :)
cwkx
17. Dec 2013 · 11:11 CET
This is beautiful and fun, I especially like the grain and particles on the end platforms. The background theme was fantastic too, loved it!
phi6
17. Dec 2013 · 12:20 CET
What an amazing mechanic. Also the level design, storyline, graphics, sound, music and level of polish makes this feel like a "complete" and playtested game. Absolutely unbelievable!
Venks
17. Dec 2013 · 12:23 CET
Wow. The quality in this game is absolutely amazing. I wish I could of made a game with his level of amazingness in such a short time. I really enjoy puzzle platformers and this is definitely one of the nicer ones. The fact that it was made in such a short span of time is baffling. Kudos!
MaTX
17. Dec 2013 · 13:29 CET
The scrolling background is adorable, love it.

I am not sure about the difficulty curve, as the game got frustrating immediately for me, but maybe that's because I am not a fan of hard platformers :)

Frustrating game, but very fun! The music was a bit repetitive.
DBRalir
17. Dec 2013 · 19:46 CET
Very fun game, it got very difficult near the end.
ResonantCraft
17. Dec 2013 · 20:03 CET
Very solid entry. I managed to get to the end and it was quite hard, especially the boss fight. I loved how you totally changed gameplay from a puzzle game to die and retry meat boy game. If I had one complain, it would be the theme not completely fitting. Got 47% completion, very challenging to get them all. Congrats.
Coblynau
17. Dec 2013 · 20:23 CET
Full marks for innovation! Great game! :)
omaha
17. Dec 2013 · 20:31 CET
This is great!!! Really satisfyingly difficult - and I love the control concept that turns traditional WASD on its head a bit... There are a couple places where the music track repeats without quite syncing up to beat on the repeat, may want to check that out
Dixum
17. Dec 2013 · 21:09 CET
Loved it!
Keith Evans
17. Dec 2013 · 21:34 CET
Awesome! Pretty challenging brain teasers and a nice amount of depth with your core mechanic. I could see this being pretty fun co-op as sometimes its tough coordinating both characters by yourself.
Nelien
17. Dec 2013 · 21:42 CET
A bit too hard for my scatterbrain -- I can't focus on two things at same time; but otherwise really great idea and /very/ well executed.
Pixelulsar
17. Dec 2013 · 21:55 CET
Nice idea and fun game.
Jgpicatoste
17. Dec 2013 · 22:05 CET
Although I don't think it suits that well the theme, I liked it a lot (specially the difficulty and polished look). One of the best games.
BrothersT
17. Dec 2013 · 22:07 CET
I could never master rubbing my tummy and patting my head. Its the same story with this for me. But it is a very enjoyable game, however challenging it may be. Fun, innovative, and fantastic visuals too - Great job!!
MrTedders
17. Dec 2013 · 22:36 CET
Well done. Great level design and difficulty curve.
Kimau
17. Dec 2013 · 22:49 CET
The mood and the generally look and deliver is GREAT! Love the use of the theme and overal solid. Sadly it came up against my lack of coordination. Resulting in me getting stuck, a LOT.
Photon
17. Dec 2013 · 23:24 CET
Wow. Major multi-tasking much? On more than one occasion I panicked when I was trying to remember whether I was supposed to press A or D. :P

By the end, everything came together so fantastically. The level design I think was at its best when you had the two bots together, of course, but the end levels were good too. Overall, great aesthetic, great gameplay, and even a great and simple story to tie it all in. Man, that was good.

Thanks again!
johnfn
22. Dec 2013 · 06:59 CET
Really good but REALLY REALLY hard. Congratulations on nailing the theme- I've noticed that before your games rarely hit the theme, but this time you got it perfectly. My only complaint is the music. As a music guy the music is not very enjoyable to listen to. If you want to delve to the minimum amount of deepness and still have good music, you should just download some VST like Alchemy that can make simple pad sounds and play around with that.