No Way Out by Eniko 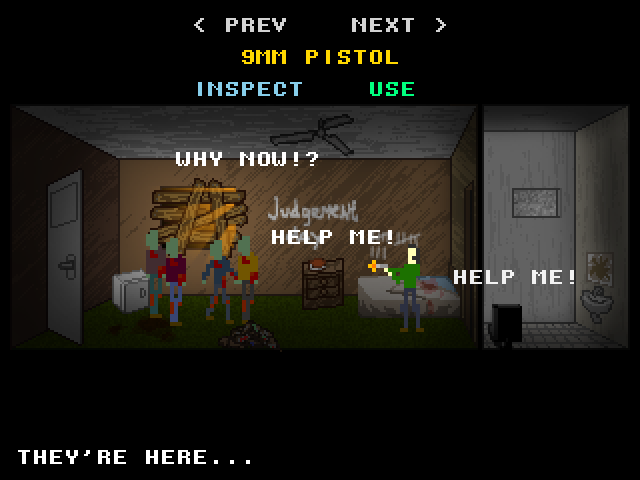 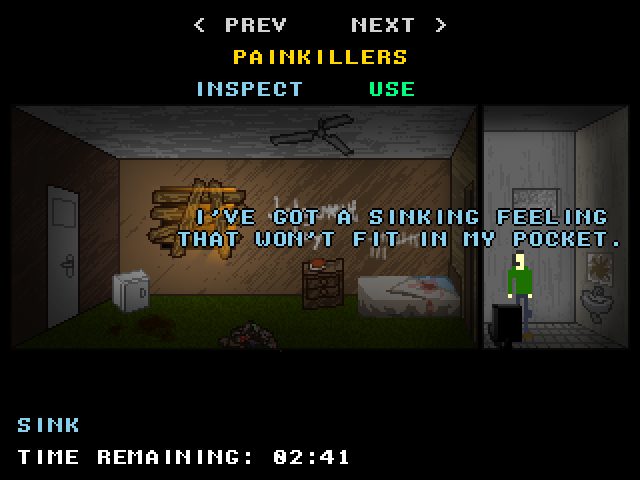 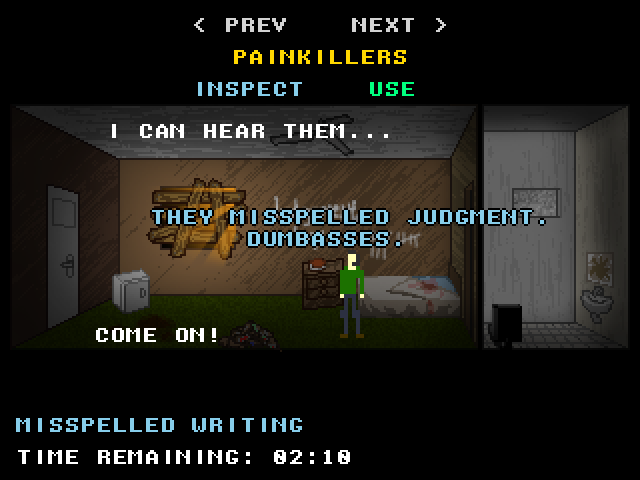 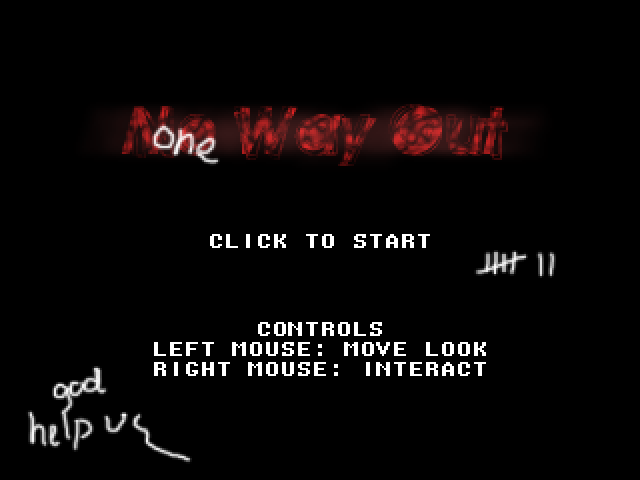 There's two endings! If you find them both, let me know, and let me know what you thought of them! :D

Should work on Firefox, Internet Explorer, and Chrome. Might work on other browsers but I wouldn't count on it, and if it does it won't have sound. Noticed one time that it wouldn't load and just stayed black, refreshing fixed it for me, try that!
> NEXT IN RQUEUE

Udell Games
16. Dec 2013 · 03:59 CET
Excellent use of the heart beats. I genuinely felt nervous as the timer reached the end. Completed it after a couple of goes. Would like to see more red herring interactions.
BeardoGames
16. Dec 2013 · 04:58 CET
Super smooth, completely engaging! I really love the graphics and the sound design is incredible given the time constraints. Gotta keep trying to get the other ending! Excellent job!
doitle
16. Dec 2013 · 05:08 CET
A nice complete thought of a game. The increasing audio intensity really makes the mood. Also props for using that particular sound effect...
Jan Marcano
16. Dec 2013 · 05:19 CET
Amazing! The heartbeats were a nice touch, but they accelerated a bit too fast for me. I didn't like all the white text invading my screen D:

I loved the story however! I thought there would be more item-combining/puzzles to do before the end though, only being able to use the fridge left me wanting for more :/

The true ending was really good, I kinda of suspected it when I noticed you could interact with yourself. It was only a matter of waiting until there was no time left to try it out.

Awesome work!
Eniko
16. Dec 2013 · 05:24 CET
The white text are the panicked thoughts of the character. When panicked, you can't think clearly or focus very well. These thoughts are intentionally obtrusive, to disrupt the player's focus and make it easier to identify with the character's current mental state, so it sounds like those were working as intended! >_>

I'm not very sure that you could call your "good ending", "good ending"... Don't you think it might be a trigger for some people?

The game messages sometimes get lost among the fear messages later in the game, I'd guess that is just what you intended, but if not, they get hard to read by the time.

Cheers, and thanks for the game!
somepx
16. Dec 2013 · 09:37 CET
Truly amazing, gameplay&graphics do really create a fantastic mood, the best touch are the "panicked thoughts". Outstanding! ;)
Steve [tacospice]
16. Dec 2013 · 11:26 CET
Great mood. Effective graphics (although the characters are of suspiciously lower detail compared to the environment.. $__$), and great sound design.

The random thoughts (I guess?) that keep popping up constantly are very distracting though when trying to focus on reading the results of your actions.

Also, movement could definitely do with some pathfinding. Getting stuck all too easily on the edge of the bed, or when trying to go into the bathroom.

The writing is quite good though and pretty funny at times.

Overall 4/5
mrjordan
16. Dec 2013 · 22:04 CET
Freakkkkky! Love it :)
netguy204
17. Dec 2013 · 03:10 CET
You took one of my favorite things about adventure games (time to think and consider my environment while relaxing) and totally through it out the window. The result? 5 stars for mood!
Suese
17. Dec 2013 · 14:44 CET
A little confusing.
sfiq12
17. Dec 2013 · 14:53 CET
Great game, loved the heartbeat effect
The end was pretty shocking too.
st0ven
17. Dec 2013 · 16:50 CET
I love your game , I died the first time and am still figuring out how to 'win' and i think thats a fun challenge. mood is good and the challenge is interesting. plus i love adventure style games so where could you go wrong?
mortl8324
17. Dec 2013 · 17:03 CET
The game got me stressed out. I couldn't get far into the game. Just ended up shooting myself in the head.
Gravedrinker
17. Dec 2013 · 17:09 CET
There was indeed no way out for me! The aesthetic is nice and the sounds were too. Having the "thoughts" rushing across the screen and the heartbeat sound stressed me out quite a bit. I got eaten every time. It maybe could have been a bit clearer what you can or should do to get a better ending because in the heat of the moment I didn't manage to think of anything else once I found out the window is barred. Also it would have been cool if you could have been able to shoot yourself at any time with your last bullet.
AdventureIslands
17. Dec 2013 · 18:16 CET
Finally found the way out after some tries. Kind of figured it out right away, but looks like you need to jump through some hoops before you can outright get it.

I really liked the atmosphere in this one, the increase of heart beats and panicky thoughts of the character really make the mood.
jimmypaulin
17. Dec 2013 · 21:32 CET
Wow that was seriously intense! And since I found the way out, actually incredibly poingant. I don't think I've found such an emotional game on LD yet, thank you! The audio is key, but the red herrings really set up the dread feeling too - more to do would have been nice but given the time this is excellent
kakhoofd
18. Dec 2013 · 10:22 CET
Near the end, I started feeling really tense due to the accelerated heartbeat sounds, and all the thoughts popping up, really great job!
rxi
18. Dec 2013 · 15:41 CET
Well, that was bleak!

I managed to get the losing outcome followed by the winning outcome. I really liked the heart beats, as others have already said it helped to add to the intensity and really brought home that I had a finite amount of time to work out a solution and make a decision.

The random thoughts which popped up over the screen not only helped to add to the intensity but also helped to be a distraction from the task at hand, in the same way panicked thoughts would distract you from finding a solution in real life.

Overall really well made, definitely an engaging experience and a good use of the theme. Having a story set in a single room is always an interesting concept, and in this case it felt as if it was well done.
soy_yuma
18. Dec 2013 · 20:40 CET
Oh, the atmosphere! I love it. I think it's a precious little game :-)
Sheepolution
18. Dec 2013 · 20:45 CET
The mood was very good! Really, really strong!
Jiggawatt
18. Dec 2013 · 22:37 CET
This actually made me feel nervous. Here's some mood points for that.
rogueNoodle
19. Dec 2013 · 11:20 CET
Wow, that was intense! After three attempts, I couldn't get the "good" ending, although I think I know what it is. Perfectly captured the feeling of hopelessness in the situation. Great job!
Faust
20. Dec 2013 · 16:15 CET
I can't solve it, but the mood is excellent. The heart beat and text popping effect is really awesome.
lekochen
21. Dec 2013 · 10:20 CET
That was intense! Very nice adventure game. I got the ending after 3 attempts.
TheMaster99
22. Dec 2013 · 18:07 CET
Great game! Have been wanting to play it ever since trying your demos on the IRC. The panic the character experiences isn't just his own, for the heartbeat and the on-screen thoughts induce quite a bit of panic onto the player as well. I figured out the solution just as the zombies started walking in on my second attempt. Great job, would love to see a post-jam version, where perhaps the player finds a way past the barred window and has to figure out what to do from there, perhaps find a working car in the parking lot?
Anoarith
24. Dec 2013 · 18:30 CET
Loved it ! :)
It's really involving because of these heartbeats and texts.
Husky
26. Dec 2013 · 16:37 CET
I got 2 ends, but I fell so sad....:(
I thought maybe there is another way to use the only bullet.
Anyway, It has a very good mood, good job! :D
SnoringFrog
28. Dec 2013 · 06:21 CET
Even though I was pretty sure I knew both endings at the beginning, the "good" ending was still...rough. Took me a few tries to be able to get it though. The heartbeats and thoughts appearing on screen were a very interesting/unique feature; they definitely added to the panic of the situation.
kristoffer zetterberg
28. Dec 2013 · 18:58 CET
what a tense atmosphere. the sound design is really something. and great ending!