[raw]
made by RobotLovesKitty for LD28 (JAM) 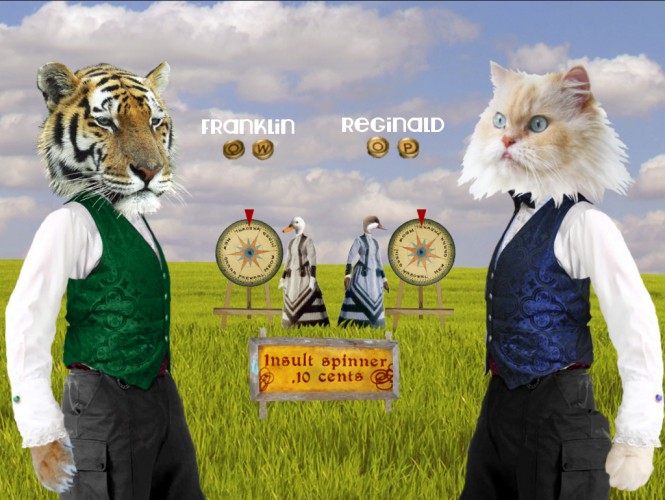 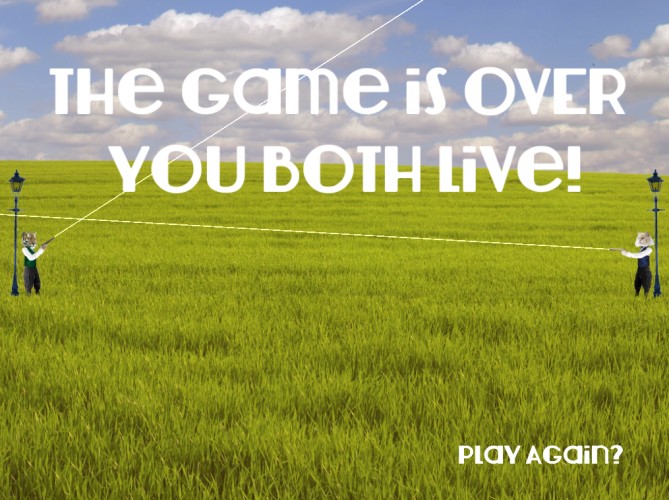 We are @robotloveskitty and we had a blast making this!

Two cat gentlemen, insults, honor, one chance to aim and one bullet to settle their dispute! Who will win? you decide!

A two player VS QWOP-Like insult slinging dueling pistol game.
-Instructions-
The two buttons (QW or OP) do it all, from spinning the insult wheel, controlling the glove arm, walking your ten paces, and then aiming your arm. May the best gentlemans win!

You can play by yourself and we will both be very impressed by your skills!

(We also updated and fixed that glove slapping section to make things more fair, and you can't shoot after your dead.)
> NEXT IN RQUEUE

It's obvious that you were going for the humor category here, and by Jove you've done outstanding. The game took forever and a half to load, but I'd be lying if I said it wasn't worth it.

It's unfortunate that I didn't have a friend nearby to play this with me, because I'm sure we would've had a grand ole time with this. I can't tell which part I like more: the absurdity of the glove slap-off, or the ridiculous way the characters shimmy their way towards the lamp poles before firing off a round.

I clicked on this game expecting to be thoroughly entertained, due to the screenshot, and I thank you for not disappointing.
conormn
16. Dec 2013 · 06:49 CET
Absolutely delightful ol' chap!
whiteknife
16. Dec 2013 · 06:55 CET
Any game with gentleman cats and duck ladies gets five stars from me. I love that it's multiplayer too, well done!
ehtd
16. Dec 2013 · 06:59 CET
The slapping was the best! Great job!
JoeProgram
16. Dec 2013 · 07:00 CET
There's some real player narrative going on here. In the third act, by tapping the keys rapidly, you can simply dance a tidy jig to the tune rather than all that gunshot business.

Aesthetically and technically pleasing, easily the best game I've played so far.
JohnnySix
22. Dec 2013 · 21:07 CET
+1 for glove slapping. The walking was hilarious, more so if you're trying to control both at the same time.
ploogle
23. Dec 2013 · 00:13 CET
This is my favorite game of this whole Ludum Dare. Not even an exaggeration.