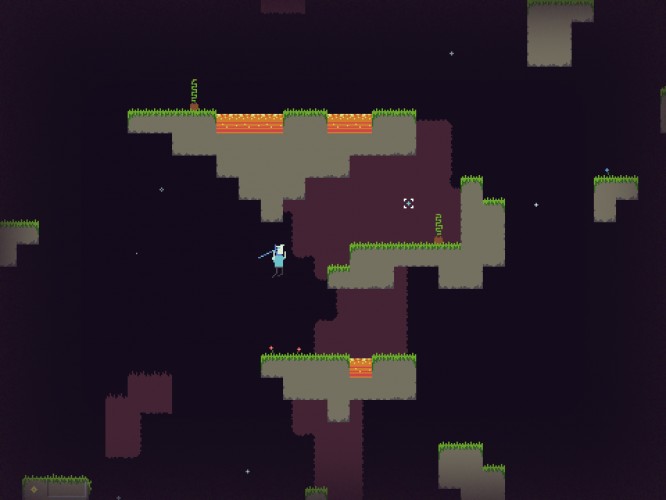 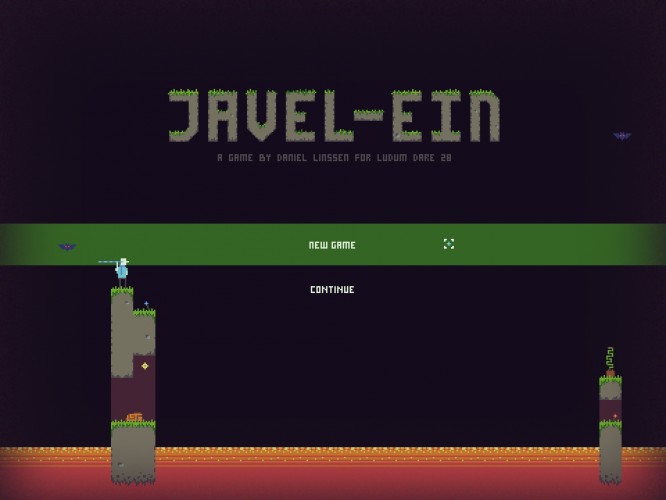 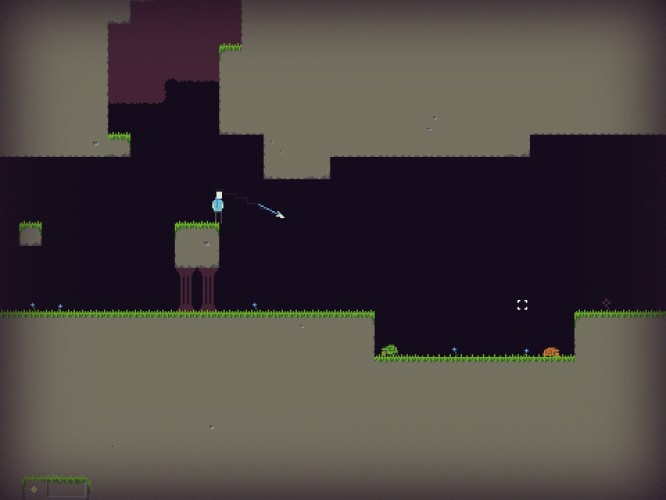 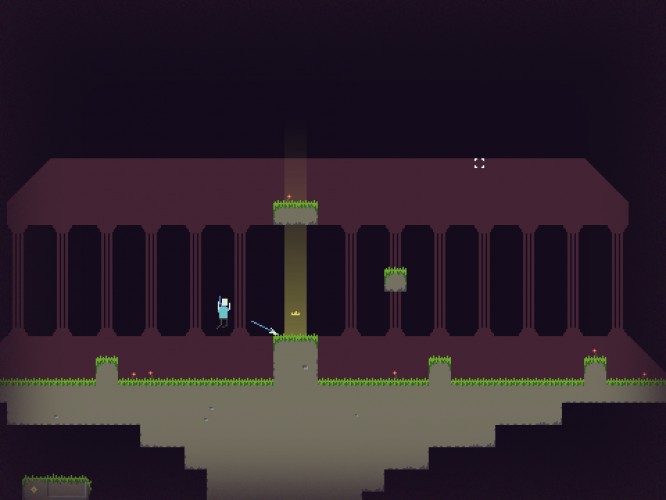 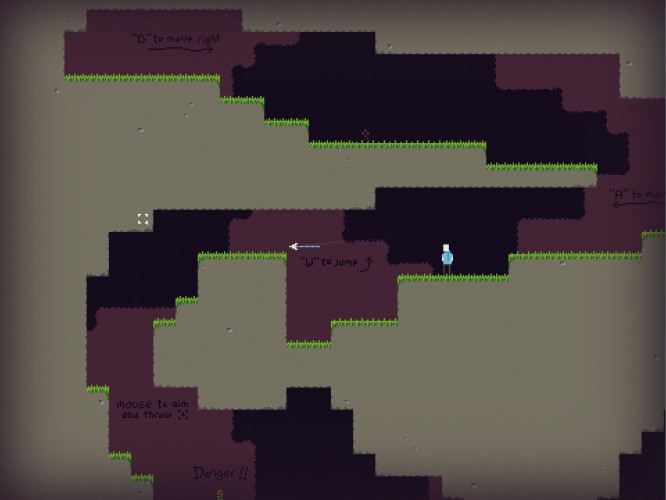 (or keep reading for additional information)

You only get one javelin! Using it together with your magnificent wit and skill, you must defeat all the enemies in each area before claiming the crown as your own. For an additional challenge, there are fabled jewels scattered throughout your journey. Collect all twelve so that no one will ever dare to doubt your finesse!

Thank you so much for playing my game, I really hope you enjoy it! Please let me know what you think of the game in the comments below.

UPDATE: I've made an updated version with slightly improved sound, a timer, some minor level tweaks and a boss level at the end! You can skip straight to the boss level by pressing "B" on the title screen, but that's not recommended for new players. If you rate my game, please base the rating off the original version, as the updated version was made outside the time frame of the jam.

UPDATE AGAIN: I've finished a full version of Javel-ein with 60 improved levels split into 4 chapters and featuring multiple bosses, a story, music and lots of small changes. Please check here or at http://managore.wordpress.com/javel-ein/ for more information!

Q. I've reached the crown but I can't progress. Why not?
A. Make sure to defeat all the enemies in the level first. When you've done so, the crown will produce a beam of light to show you how eager it is to adorn you.

Q. What are the yellow spiny things?
A. Optional collectibles! There are twelve of them altogether. You can see how many you've collected in the bottom of the screen.

Q. I threw the javelin into the lava. What do I do?
A. Throw yourself into the lava as well. If you get really stuck somehow, press escape and then click continue.

Q. How do I turn off the sound?
A. You can turn the sound on or off by pressing the musical note on the title screen.

Q. How many levels are there?
A. There are currently seventeen.

Q. Will the game be available on Mac/Linux?
A. Probably not. I'd love for everyone to be able to try out my game but at this point I just have no way to produce a Mac or Linux build.

- Tacospice, for suggesting the name.
- #ludumdare, for being great company.
- Caffeine, for keeping me awake.
- All the great comments and feedback.
> NEXT IN RQUEUE

If it only had sound, it would be the perfect game!
Oh, and maybe press-and-hold to show the throw arc.

The first time I played the first level with a bat in it, I got all the first 3 enemies with a single throw. It was glorious.

I couldn't beat the level with all the bats attacking from above, although I tried about a million times. Still fun though.
The controls are very tight, and whenever you fail, it doesn't feel like it's the game's fault.

I almost quit at the part where the arrows shoot over a pit with four of the back-n-forthers in it. Just so much waiting in between each failure. But I persevered and had some fun! Loved scoring multi-kills, I think my best was a quad.
doitle
17. Dec 2013 · 08:36 CET
Throwing the javelin is so satisfying. Really fun and frustrating game that feels very polished already.
thegoofromspace
17. Dec 2013 · 09:37 CET
Best game I've played yet! So good I actually stopped everything just to beat it.

Managed to get 11 of those jewel things and beat the game. Wonder what happens when you beat the game with all jewels...
SpellingPhailer
17. Dec 2013 · 16:08 CET
Awesome game. Really liked the one javelin thing, made the game challenging. The only thing missing was music. And the jump sound was a little hurtful to the ears. Other than that the game was really great.
TomboFry
17. Dec 2013 · 16:19 CET
Very nice looking, would love to hear some music, it would add a great atmosphere to the game, especially if it was just ambient music
windwalkerranger
17. Dec 2013 · 16:33 CET
Probably the best in LD I have seen so far, great work! Too bad the sounds didn't make it to entry version. Very beautiful work. Congrats!
howieV (binarygirl)
17. Dec 2013 · 16:35 CET
really good man :)
SaintHeiser
17. Dec 2013 · 16:44 CET
Excellent work!
Gameplay is very clear and additive.
But sound so terrible as hell. Really, I got headache =(
Ditto
17. Dec 2013 · 17:02 CET
Stunning graphics, really good controls, really good game! A bit frustrating with the long delay before respawning maybe, :P
Managore
17. Dec 2013 · 17:05 CET
Thank you for the great comments and feedback, everyone!

SpellingPhailer, SaintHeiser: I'm really sorry you found the sounds jarring, I'm not very experienced when it comes to audio (which is also why there isn't any music) so it's still a challenge to make the sound effects suitable and unobtrusive. Thanks for letting me know!
Gravedrinker
17. Dec 2013 · 17:22 CET
Awesome graphics and feel to it. Creates a nice atmosphere and has a good amount of content. Well done.
scoopsy
19. Dec 2013 · 02:17 CET
I'm on OSX - too bad, as this looks wonderful!
javifugitivo
19. Dec 2013 · 02:18 CET
Very very very nice game! Really cool!
sandbaydev
19. Dec 2013 · 10:23 CET
Hahhah, witty idea about one-javelin-that-you-must-throw-and-then-get back! Good job.

Nice job!
Maple
19. Dec 2013 · 17:45 CET
This is great! I played right through till the end. I didn't realise that there were secret things to collect until a couple of levels in, so by the time I'd finished the game I had missed some from the start. I like the art direction a lot, but I feel like it could slightly have been amped up a little. I can't really say how. Physics were nice -- no abuse of slippery physics. You had a nice batch of levels for me to play through which was also nice. I really wish it had music though. I think that was the one main thing it was missing. Oh and I like those enemy plant things that extend at you. I mean, they can be quite devilish but I really like their design. Especially the "... oh fuck" when you threw your javelin near it without killing it and had to sacrifice yourself to restart the level. Great job, man.
Shaun Lebron
19. Dec 2013 · 18:53 CET
I like the excitement of combo kills and the danger of losing your javelin. Thanks for all the levels as well. A very new and fun experience!
Atmospherium
20. Dec 2013 · 07:27 CET
Really cool art design and gameplay. Good enemy variety for a jam game. I think it would be better to smooth out the camera a bit, as it tends to feel a bit too floaty and disorienting.
Dr. Mo
20. Dec 2013 · 08:35 CET
It's nice to see a game with some challenge. Nice implementation of You Only Get One Weapon.
kutullu
20. Dec 2013 · 09:03 CET
Amazing game! Art style reminds me of Fez. :)
Cheers, Marcus
csanyk
21. Dec 2013 · 08:02 CET
This is really great. The last (?) level is impossible, but I really liked the mechanic. Come back and add sound effects and share your source, it's a well done game that deserves to show off its code:)
csanyk
21. Dec 2013 · 09:17 CET
Just beat the boss in the enhanced version! It was epic, wish I'd video captured that fight. This is one of the best games I've played in a long time. Everything about it is superb. Your level design is impeccable.
Managore
21. Dec 2013 · 09:34 CET
Firstly, thank you all so much for trying out my game! I'm really happy with how the game turned out and I'm delighted that so many people have enjoyed it!

* Slightly better balanced sound effects, and a more subdued jumping sound. It's still nowhere near perfect but hopefully it's getting closer.
* A boss level! I felt the game should finish up with a bit more of a bang.
* A timer. You can enable this by clicking on the stopwatch on the top right corner of the title screen. It keeps track of your total playing time from when you click "new game" to when you beat it. If you like, you can post a screenshot of your best time!
* Slight level tweaks. Only one or two, and you'll barely notice them, but they should make a couple of the levels work a bit smoother.
* A small reward for collecting all twelve jewels.
* The continue button now works between game exits.

I'd still like to add music but it'll take some time. I'll share the source eventually but I'd really like to clean it up first.
Zerkruemler
21. Dec 2013 · 14:41 CET
Cool retro graphics and fitting sounds. Well done platformer with accurate controls. I liked it, although I am not a fan of platformers. The shooting bullets made it too difficult for my skill.
Madball
21. Dec 2013 · 14:53 CET
Awesome game! And it's actually finished. Nothing to add here. Excepting for music and better sounds maybe.
Diptoman
21. Dec 2013 · 18:07 CET
Awesome work. A simple idea, yet beautifully and perfectly executed. It's the little things you've added/paid attention to that give it a nice touch, the scrolling from the starry sky at the start of each level, the yellow..thingy to get in each level, those little flowers and so on. Really liked it. The application of the theme is perfect. One wrong throw and it's equal to dying.
GFM
21. Dec 2013 · 22:06 CET
Beautiful game! And, although hard, very fun! Actually, it's not really "although hard" because I like challenging games. XD

The levels well really well made!

Great work!
nka
21. Dec 2013 · 22:13 CET
Totally awesome. Great use on theme. Mechanics is also great. love this entry.
TijmenTio
23. Dec 2013 · 15:20 CET
Great use of the theme! Only thing I can really complain about is the lack of music.. But yeah, great job man
jimmypaulin
23. Dec 2013 · 19:58 CET
Absolutely superb! Feels so crisp and juicy to play. Really appropriate sounds and the artwork is to die for. The collectables added another dimension and it really felt good to throw that javelin and score multiple hits. Interesting AI patterns from the beasties, all in all a pretty much flawless entry... oh go on then, music please ;)
DhantonGames
23. Dec 2013 · 22:32 CET
The best game I've played so far :D
ViliX
28. Dec 2013 · 16:23 CET
I love the FEZ-like graphics :)
skiesgamingtv
29. Dec 2013 · 17:06 CET
Amazing gameplay and graphics, and nice patterns.
I quickly forgot I was playing a LD game and loved the experience :) Will you keep working on it?
You can see my (french) review here at :
http://youtu.be/M9Y2cf3VvxM
Managore
31. Dec 2013 · 05:25 CET
Thank you for the kind words, everyone! I'm currently developing an extended version with forty levels split into four chapters, with a new type of enemy and a boss for each chapter. If all goes well there will also be music and a story to give the game more depth! Here are a few teaser screenshots:

Check this out!
http://postimg.org/image/6j4u0ihyn/
binasa
30. Jun 2017 · 19:40 CEST
Fully zoomable, offline maps that shows your location and points of interest around you (your location is shown on the map). http://download-software-gratis.com A hidden encrypted disk is a disk created at the back portion of an outer encrypted disk file.