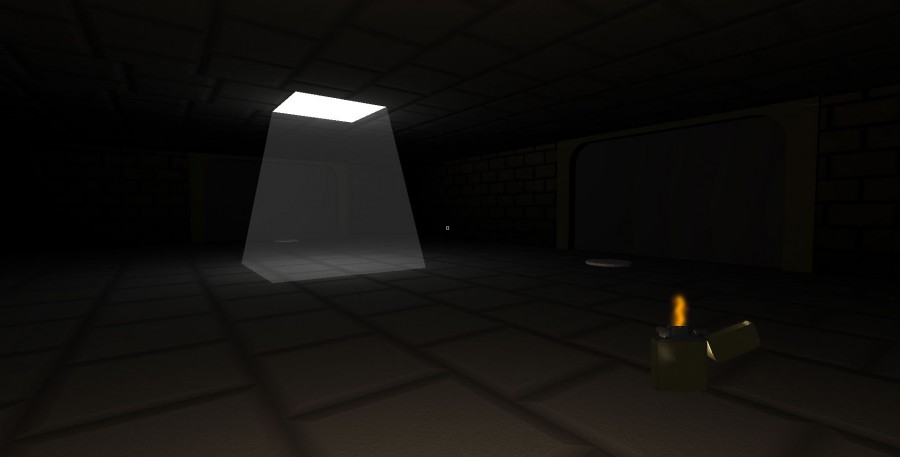 "L1ghter" is an epic love story between a boy and his lighter and a dark temple full of unforgiving traps.

Controls:
WASD/Arrow for movement, Mouse to turn.
Left Mouse to interact
Mouse Wheel or SHIFT to strike the flint
Right Mouse or CTRL to flip the lid

Hints:
- Solution to the Chessboard puzzle: http://i.imgur.com/61wkcta.jpg
- The big spider can be trapped in the "jail cell".
- One of the jars won't shake when you approach.
- If you die, your progress persists and you keep any keys you've collected. You start with a fresh lighter.

This was built in 48 hours by Quill18 in front of tens of thousands of people via livestream. Tools:

Updates:
- Removed bottom two quality settings (you NEED per-pixel lighting).
- Fixed "Escape" button on standalone builds
- Running out of lighter fluid killed the lighter instead of the player. Oops.
> NEXT IN RQUEUE

Skyrossm
16. Dec 2013 · 02:54 CET
much game. very fun. would play again. so exciting
peacegiverman
16. Dec 2013 · 03:19 CET
Nice game, great audio! :D The "whoosh" at the chessboard freaked the hell out of me at the. Now if I could only survive that spider...
sausag3s
16. Dec 2013 · 03:28 CET
I was waiting for this game. It's really great, user friendly and smooth. Thank you so much Quill18!
xgeovanni
16. Dec 2013 · 03:48 CET
Linux version seems to work great.
Pinkerpops
16. Dec 2013 · 04:01 CET
Watched the stream all day, glad it's finally done :D
archaeometrician
16. Dec 2013 · 04:39 CET
Ahh its amazing to finally try the game I watch you code ! Awesome job ! I love it, the voice was a great add ;) and really good idea to use the mouse wheel to ignite the lighter.
RandomPerson123
16. Dec 2013 · 04:42 CET
Someone really likes your game - https://www.youtube.com/watch?v=TxuHMvvvQxU
oxysoft
16. Dec 2013 · 04:48 CET
Incredibly boring, the voice acting was annoying and seemed rushed. The idea on the other hand wasn't too bad and the mouse wheel idea was pretty clever
mcgraw
16. Dec 2013 · 04:53 CET
This came together really well! Thanks so much for streaming the work you did on this over the weekend!
BillyTheCodingKid
16. Dec 2013 · 04:57 CET
Great job quill this was a excellent game made in 48 hours (i don't even know how you did it)
Thein
16. Dec 2013 · 05:33 CET
Very awesome game! I loved the puzzles, especially the spider pots. Your voiceovers made the game much more enjoyable and funny, although they don't fit the atmosphere.
ZXeno
16. Dec 2013 · 06:56 CET
This was pretty incredible for just 48 hours! I really enjoyed the banter/barks, the interesting level layout and the controls were pretty decent. I think my only criticism was that the puzzles were more brute-force solving than anything, few hints as to how to get there. The chess-board puzzle was somewhat startling when you get there, and difficult to figure out the pattern.
Skepsis
16. Dec 2013 · 07:01 CET
The chess board puzzle was awesome! The giant spider was terrifying. Atmospheric sounds could have been improved, although hearing the whooshing of the saw blades in the distances was fantastic. Overall, awesome game! Loved the twitch stream too!
lincore
16. Dec 2013 · 11:37 CET
Very cool game, it's incredible what can be done in 48 hours with Unity. That spider was too scary though :~)
kewry
16. Dec 2013 · 16:08 CET
Awesome work sir!
joserodolfofreitas
16. Dec 2013 · 16:47 CET
The voice acting was great, I loved it. I had more fun hearing the player than playing the game itself though.
The mood was very nice, but I missed some hints on how to solve the puzzles and sometimes the imnement danger appeared too quickly, without me even noticing it. I liked the idea of letting the tomb as a flag for where you died, though. Because, first, you know there's a danger there and take more careful, and second, because the player can use that to create a map for himself, using the tombs as map references.
Nice Job!
baton4ik
16. Dec 2013 · 19:40 CET
The game looks and plays great, is fun and the audio is just amazing!
I've found some bugs though:
1. The lock audio repeats every time you approach it (not sure if intended, feels like a bug)
2. The giant spider audio started playing when I already trapped it.
3. When an audio starts playing it doesn't turn off the already playing ones. I once had 3 voices screaming at me at the same time.

But it's too bad that we have only a lighter and no arm with hand to grab it :(
Korwegian
17. Dec 2013 · 22:24 CET
Gave up after a while, stoopid spaidur.
zkenshin
18. Dec 2013 · 19:14 CET
Nice job, loved the mousewheel/lighter flint mechanic. :)
Danman9914
20. Dec 2013 · 23:43 CET
Using the mousewheel to flick the lighter is brilliant. I found the voice-over to be a little annoying and not all that humorous.
BradleySmith
04. Jan 2014 · 22:29 CET
Watched you on stream developing this and it looked pretty interesting. Nice take on the theme and an impressive amount of work for 48 hours, good work on the animation work with the moving pots - rated highly! :)
huhwhozat
05. Jan 2014 · 05:06 CET
I really like your self-narration, I think it really added a lot, though perhaps you should keep track of repeated lines. Also, I think normal quill18 is funnier than pitch-shifted quill18, but that's just me. XD A very solid package and clever use of the theme. Your lighter wins my award for favorite FPS 'weapon' of the year for both it's usage and control scheme. :) Great attention to detail with the audio, even including footsteps, though some of the traps lacked sound and some ambient noise could have added a lot. Good use of the theme too.
BudgieKnight
17. Apr 2015 · 09:15 CEST
Very fun game, I'm surprised that anyone could make such a good game in only 48 hours. Although the voice acting is a bit buggy and the chess puzzle drove me insane, I stilled had a good time with it and was greatly impressed.

I'm looking forward to your next Ludum Dare game and tutorials.