The Wizardry of Differentiation by mortus 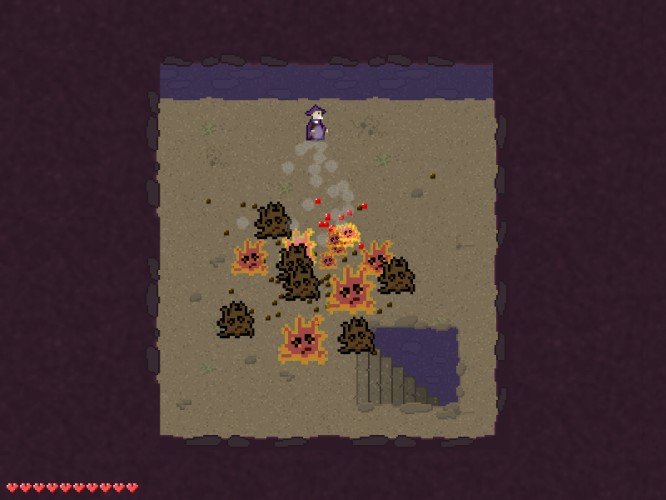 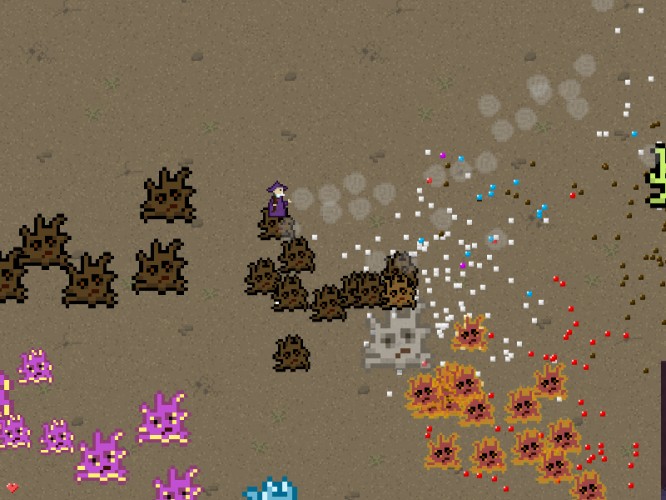 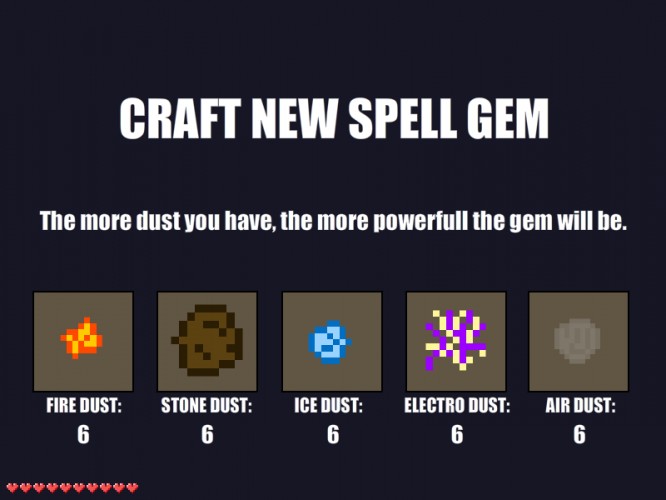 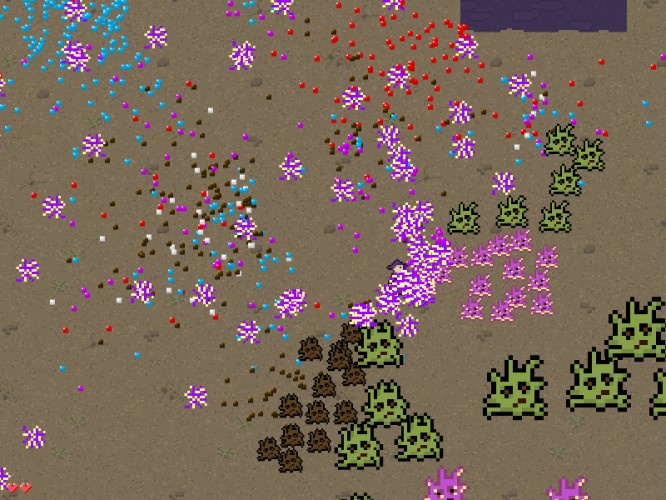 There are 180 different spells in the impressive arsenal of our hero the Wizard, but as it goes, on each level He Can Only Get One.

If the game runs slow for you even with low enemy count, please consider trying downloadable swf version. I will really appreciate if you let me know if it's any faster in the comments.

Post-compo changes are very minor and I actually had them planned before compo ended but forgot to add on the last minute.

Arrows to move.
Mouse to shoot.

After each level you have first to craft one new Spell Gem. Then you select from 1 to 3 of your available Spell Gems to form a spell of your liking.

First selected Gem defines the basic nature of your spell.

Second Gem shapes the form of your spell, attack type.

I didn't have horribly much time to spend on balance, so it's far from perfect.

Feel free to share names of your favorite unbalanced spells (you can copy those right from game) in comments!
> NEXT IN RQUEUE

chicknstu
16. Dec 2013 · 13:16 CET
Really enjoyed this. Would like to see this spell crafting system make it into a bigger game.

Good job :)
cwkx
16. Dec 2013 · 13:39 CET
Extremely good entry - I can't believe you managed to implement such complex mechanics in such little time. The spell combining is very cool in the later levels, great job!
turnip
16. Dec 2013 · 14:00 CET
Awesome! This is easily the entry that addicted me the most so far. Really nice mechanic for creating spells, I just wish I understood how it worked a little better e.g which gem controls the firing pattern, which controls the damage type etc. Nice job!
louis.denizet
16. Dec 2013 · 14:15 CET
Really awesome realisation in such a short time!

It was one of my idea of game to do but thought it was too ambitious, looks like you done it just right =)
somepx
16. Dec 2013 · 15:38 CET
Crafting system is really well made and complex - game is a bit frustrating, maybe I'm not that good! Nice job
Tsumei
16. Dec 2013 · 15:44 CET
Quite liked it. Had some problems with lag that might have to do with optimizations, but it was very creative and really got my interest. Crafting spells is a great mechanic.

My one critique is the lack of a volume slider. Otherwise great.
the
16. Dec 2013 · 16:29 CET
Its fun to craft, but some spells are very weak and
unexpectedly leads to the dead. Besides, great job!
scottrick
16. Dec 2013 · 16:42 CET
Nice work! It would be nice if ASDW worked for movement as well but not a big deal :D
mtrc
16. Dec 2013 · 16:49 CET
Really good work! I'd have liked a visible health meter and maybe a faster movespeed? The core idea is really clever and well implemented given the 48 hours! Well done on all counts :)
kewry
16. Dec 2013 · 17:10 CET
This game is amazing
mortus
16. Dec 2013 · 17:59 CET
Tsumei:
I'm getting lag only at later levels and only with specific weapons and tactics and I was testing on a slow machine, so that's strange. I'll add downloadable swf version in case it could run faster out of browser for some people.

mtrc:
There is a life meter - small hearts in the left-bottom corner of the screen.
Cheshyr
16. Dec 2013 · 19:43 CET
i love customization games like this. great game.
CryoGenesis
16. Dec 2013 · 19:47 CET
Nice 'juice'! Game is fun, cool spell mechanics. Good job!
Symmeteer
16. Dec 2013 · 21:42 CET
Fun! The range of spell possibilities makes me want to keep playing even when I get swarmed with dudes.
Symmeteer
16. Dec 2013 · 22:41 CET
Pushing novas (anything + air + air) are awesome. This game is awesome. I would have kept playing for hours if my browser hadn't accidentally gotten out of focus - the game kept playing and I died while going back to my window! You should definitely fix this. Just have the gameplay pause when the window's not in focus.
capnramses
16. Dec 2013 · 23:30 CET
all of the above + i really liked the music. reminded me of DOS games from the early 90s yusss!
Alink
17. Dec 2013 · 19:18 CET
Fun and smooth impressive number of stuff on screen, really pleasing to kill and collect (only wish some magnet). The weapon variety was really cool.
carlsommer
17. Dec 2013 · 20:50 CET
This was so much fun! Great crafting system on the spells and great overall variety! Good music, good sprites. I suppose, I would recommend making it WASD movement and adding a sprint feature (if you were to make any post-dare changes)
Alexbrainbox
17. Dec 2013 · 21:28 CET
This was fun! Slightly unbalanced towards Fire in my humble opinion. But then again I always play DPS mage so what do I know ;)

Given more time and some polish, I seriously think that it could be a hit :D
triforcespark
18. Dec 2013 · 08:52 CET
I really love everything in this game: graphics, the roguelike gameplay, music, and simple controls. Aslo addictive.
Quite good given just a short time...
RhysD
18. Dec 2013 · 13:54 CET
Fun game :) I liked the mechanic and the choice the player gets. The sounds were a bit annoying (the fire spell), but the rest was awesome!
aviktorov
18. Dec 2013 · 14:39 CET
Wow! Very addictive game! Reminds me of Magicka with crafting and looting. Awesome! :)
Masadow
18. Dec 2013 · 17:57 CET
WOW ! The best game I played so far, and I'm sure it will remain the best ! I can play this for hours. Audio is amazing, graphics are real cool, core mechanic remind me Binding of Isaac, but it's way more funny ! I'm really impressed.

I found an invincible gem: Wind then fire then electro. You can't get hit with this one :p

Spell: Enlarged Windspray
Combined level: 124
Masadow
18. Dec 2013 · 17:58 CET
WOW ! The best game I played so far, and I'm sure it will remain the best ! I can play this for hours. Audio is amazing, graphics are real cool, core mechanic remind me Binding of Isaac, but it's way more funny ! I'm really impressed.

I found an invincible gem: Wind then fire then electro. You can't get hit with this one :p

Spell: Enlarged Windspray
Combined level: 124
Denis Chakarov
18. Dec 2013 · 18:56 CET
Cool game! Congrats! :)
I just wish there was a way to see what spell will you have when you combine the gems, before you actually enter the dungeon. So you could check the possibilities and choose the one you most like.
Ludipe
18. Dec 2013 · 23:33 CET
I liked the crafting system, reminds me of magicka, however, I'd like to have different strategies when fighting enemies(besides choosing the spell). You get to capture a feeling of empowerment with this game.

P.D.: I want to invite you to replay our game ("The sidekicks"). In the settings menu people can customize the difficulty and create crazy rules. We added this feature because we didn't have time to balance the game. It's a cool feature and some users missed it.
mortus
19. Dec 2013 · 10:43 CET
Thank you for the kind feedback, everyone! It motivates me quite a lot, especially given that I wasn't so enthusiastic about the final state of the game myself when I finished it.

My favorite spell so far is the burning wind nova (lvl 150).
anvoz
27. Dec 2013 · 18:00 CET
Awesome and very addicting game. The crafting system was really cool. I also love the graphics and the sound effects.

I don't know if monsters become stronger or I just used a wrong combination that make the spell seemed pretty weak sometimes.
archaeometrician
27. Dec 2013 · 20:23 CET
Wow great mechanics ! Amazing work !
HybridMind
28. Dec 2013 · 20:57 CET
I enjoyed trying different spell combos and seeing what happened.
mcapraro
29. Dec 2013 · 17:01 CET
great entry! this was neat and looks really polished. i love the concept of only having one spell per level. it would be cool to get a clue as to what you will be fighting next so you can strategize and choose the right spells/gems
Jeremias
01. Jan 2014 · 18:10 CET
The concept is a really nice one and it was fun to test out the different combinations. If you continue working on a post-compo, I would fix the following things: make the character move faster and add a lot of juicyness like effects on hitting enemies or getting hit, more soundeffects etc.
van noctar
03. Jan 2014 · 22:54 CET
Waouh! Very addictive!! Congratulations for gameplay and graphic design!
xhunterko
06. Jan 2014 · 05:54 CET
*slaps your wrists with a metal ruler*
And let THAT teach you not to make a mouse aiming based game without WASD movement. Ow my wrist. Neat idea. A little stretching of theme. And at first I didn't think there was an ending because I kept dying. This feels like it could be explored further though.
shard123
07. Jan 2014 · 00:57 CET
Controls were a little annoying but great spell system which made it fun to keep playing.