Dungeon Raider by The Evil Cult 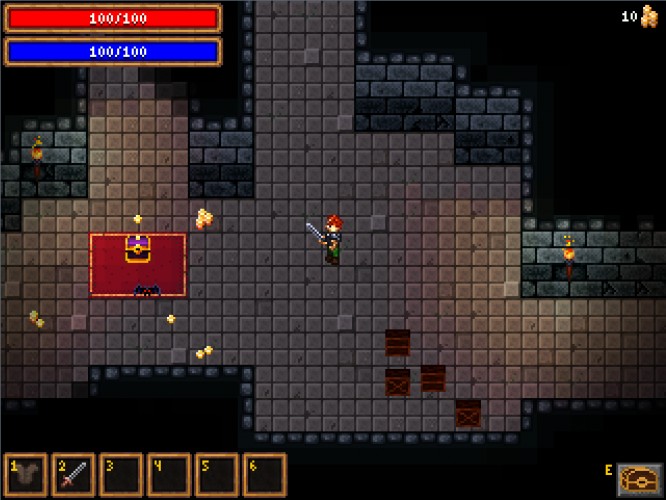 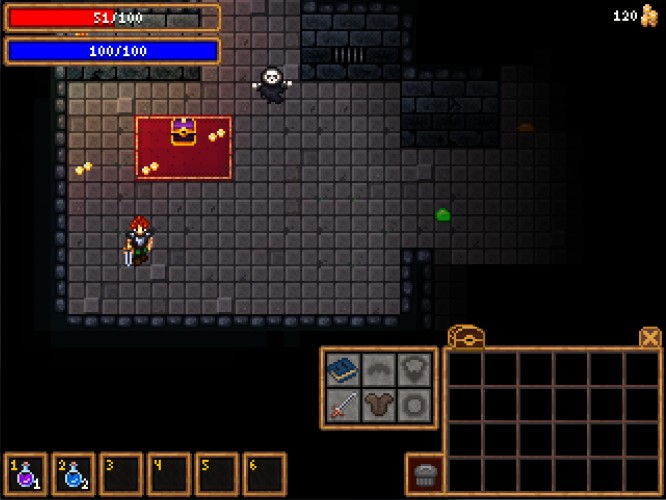 Dungeon Raider is a real-time action based roguelike with swords, sorcery, and dozens of items to find! Can you make your way down through each floor and face the challenges that await you below? Be careful, you only get one life!

We set the bar pretty high this time and I think we managed to cram more into this than we have any other Ludum Dare, and are pretty pleased with the result.

When rating audio please note that we used royalty-free music, but all the sounds are our own, so rate accordingly.

Thanks for taking the time to check out our game!

HOW TO PLAY:
WASD or arrow keys to move.
Space to perform a melee attack.
Shift or R to cast a spell if you have a tome equipped.
E to open inventory.
1,2,3,4,5,6 to use hotbar items.
Left click to pick up/place items on hotbar or inventory.
Right click to use or equip an item.

You can find spell tomes on lecterns.
Find the portal in each level to advance to the next one!
> NEXT IN RQUEUE

nyrrrr
17. Dec 2013 · 15:24 CET
This game is really awesome! Just play thru it :D I see how Hammerwatch inspired you. I really dig that graphical style of yours. And lots of stuff you had to implement within this short period of time. I'm seriously impressed :)

Looking forward to seeing more from you next LD
Sharpevil
18. Dec 2013 · 03:00 CET
Very neat game. Only played halfway through level 2 before sudden crash to desktop, though.
raisedmedia
18. Dec 2013 · 19:50 CET
Awesome dungeon crawler.
NiceAlexanderAS
18. Dec 2013 · 19:51 CET
A game with a lot of potential! Incredible work guys! i love the art style and the game was pretty fun! when i collect a lot of items i feel like i'm going somewhere and i feel powerful! i kind of don't like the audio, i feel like it needs something, maybe more sound effects or IDK but its ok nice work, you guys should continue the game! :D
lotusgame
18. Dec 2013 · 20:44 CET
Fantastic game ! Too bad the hit area is awkward because you can't hit crosswise :s With player animations and a better hit area system it will be very very fun ! Congrats :)
Chaoseiro
18. Dec 2013 · 22:00 CET
Nice graphics, and nice light effect :P
the game plays really well, you really should continue it and expand its levels and items :D
evilseanbot
20. Dec 2013 · 08:56 CET
Too slow it on my low-power new laptop.
Ekilibr
20. Dec 2013 · 10:26 CET
Very awesome work !
I just can't imagine how you managed the time limitation. You must have made days of 30h O.O
Really great job
brogrammers
20. Dec 2013 · 11:08 CET
best ludum dare game I've played 'till now. I'm dead serious.
glovecat
20. Dec 2013 · 11:12 CET
Really amazing gameplay and graphics. In my computer the performance was slow, maybe the shaders?? I know that in just 72 hours, optimizing task had low priority, so it's ok!
OrangeeZ
20. Dec 2013 · 16:29 CET
A really, really awesome entry. I even ignored the fried chicken nearby while I was playing the game ;)
Diptoman
20. Dec 2013 · 18:44 CET
Apart from the weak usage of theme, I can't complain about anything here!
How did you guys manage this in 72 hours? D:
Bruno Massa
20. Dec 2013 · 22:42 CET
VERY good game man. I bet you had previous experiences with the genre due the polish level you gave it!

totally recommend a try
psychomonster
21. Dec 2013 · 00:11 CET
nice dungeon game... reminds me of hammerwatch. Like the art and the smooth gameplay. Played it for a while!
Zener
22. Dec 2013 · 12:16 CET
This game is so cool, I could play it for hours. The graphics and sound are awesome, special mention for the "line of sight" algorithm. Congrats!
SuperPokeunicorn
23. Dec 2013 · 06:43 CET
The game was very visually impressive, although the sword swinging animation was very weak. The lighting was also very good. I especially like how the light would sine through corners, revealing loot and intriguing you into finding out how to get into that room. I found it odd that using a scroll used up both the scroll and manna. You would think that only tomes would drain your manna, since your scrolls are enough of a limit to prevent you from spamming spells. Also, I was rather disappointing that the gold only counted for score and not some sort of in game currency. It would have also been interesting to see more variety in the swords and armor and not just one being objectively better than the other. I preferred that way that the necklaces and rings work where you would have to decide whether manna, health, or gold were more important to you (But, then again, the gold didn't really do anything, so why bother). Also, one more thing that I noticed is that if you put on the necklace of wisdom and take it back off, you retain the manna, causing the meter to visually overflow. But, all in all, this was a very well put together and impressive game for the time constraints.
Crusable
23. Dec 2013 · 07:07 CET
Way to laggy, it takes a few seconds to update after I move.
PEBKAC
23. Dec 2013 · 08:58 CET
Excellent game, but did I miss the link to the theme?
Darkcoder
23. Dec 2013 · 10:47 CET
The engine and graphics are very nice, but I found the combat to be annoying due to the awkward attacking. While impressive for 72hrs, the gameplay itself was way too easy and repetitive. If you cut two levels from the game and added some stronger enemies into the mix then this would have been a lot better. I also questioned why there was so much gold on every floor when there's practically no use for it.
Zerkruemler
23. Dec 2013 · 11:08 CET
Very good game. I plyed it through and got 2312 gold, which I use now to buy hmm... a treasure chest to put all my wealth in.
Really good graphics, nice music, cool enemies, good levels. The only critic I have is that the sword is more a medium range sword. It works well at some distance, but doesn't cut anything once the enemies are too near. This seems strange to me. The boss fight was also very cool and stressful once the boss noticed me. Very well done.
runvs
23. Dec 2013 · 11:34 CET
What a great game! I really like the graphic style and the sound as well as the gameplay. I also like the ligh system! Haveing created this game in just 72 hrs is incredible!
Vladp995
23. Dec 2013 · 13:02 CET
Really cool game. But sometimes the monsters get stuck in you and you die fast
bitowl
23. Dec 2013 · 17:20 CET
this is really cool!
I wish I could draw as good as you
postmodestie
23. Dec 2013 · 18:06 CET
Very nice, enjoy the drops a lot; pity you couldn't finish the character animation.. :)
The Evil Cult
24. Dec 2013 · 05:53 CET
Wow, lots of comments! Thankyou everyone for your feedback.

In regards to the theme, one of our first thoughts when hearing "You only get one" was a typical roguelike game, where you only get one life, and as a result random elements and quick progression are introduced to make for fun when replaying after death. We maybe didn't get enough time to implement everything we wanted to take from the roguelike genre, but we think we got the core elements down and were pretty satisfied with that. Unfortunately for people unfamiliar with roguelikes the theme might not really shine through :(

Gold was something we wanted to have a use for in game, but we didn't have enough time to implement. We wanted to have a shop room that you could randomly encounter and purchase items from. In our second Ludum Dare game 'Stranded' we had pots in our game similar to this and one request we kept getting was to put something in them, so we are moving forwards at least! We also think that even though gold isn't useful in game, it still feels pretty fun to loot.

@SuperPokeunicorn
The scrolls don't actually cost mana. Not sure what was happening there for you.

Again thanks everyone for taking the time to download, play, and comment. We worked really hard on this so it's really great to see people take the time to post some thoughtful comments about it here.

-Andrew (Art/Design)
Denis Chakarov
24. Dec 2013 · 11:31 CET
Huge accomplishment for 3 days of work! Congratulations Evil Cult!
I was experiencing performance problems too, like other players said. Even died because of that. It was a bit too easy: monsters die easily and you get a lot of loot, which feels good but makes the difficulty low. Also I missed mini-map of the dungeon, which would be very nice to have.
Anyway you've done amazing job! Respect!
foumart
28. Dec 2013 · 04:18 CET
Awesome game. Decent engine. Reached 5 or 6th stage and at spawn lagged so heavily that i ended the task, no other performance issues though.. Some ranged monsters would be cool to try.
skiesgamingtv
30. Dec 2013 · 01:10 CET
Hi there, what a nice game ! Loved the sprites and the gameplay is great, so many things to loot :)
You can find my (french) review here :http://youtu.be/GuZqWCg3RSo
skiesgamingtv
31. Dec 2013 · 00:25 CET
Me again, just finished the game, and had a real blast !
Is there any way to contact you guys?
The Evil Cult
31. Dec 2013 · 13:35 CET
Thanks for the review. :) You can contact me by email at vaelzan@evilcult.net (I can pass on messages to the rest of the team if you send them there).

I think there may be a bug in the current version where later levels have issues (it's either in the item drop code or the monster spawning code, since they're the only things that change due to level you're on) - I'll see if I can reproduce it when I get home from my vacation in a few days and fix it.

-Patrick / Vaelzan (Programmer)
sandbaydev
02. Jan 2014 · 21:54 CET
A great entry!
foumart
03. Jan 2014 · 16:11 CET
As I recollect at every level begin there was always a slight delay/lag for 2-3 seconds. The level I experienced the heavy lag however ran for a couple of seconds progressivelly lagging until it was unplayable. Hope that helps.
Madball
03. Jan 2014 · 16:48 CET
A great game! Complete and polished. However, it was too easy. It doesn't get harder. Only mob spawn is increasing, but it's very easy to manage. Level 6 was very laggy. I stopped there with 4?674 (Yes, "4?674") money (what does it ever do?) and 57 heal potions. And there are a lot of little things bugging me:
Frost rune should spawn at your position, but it spawns to the bottom-right from you.
Big slimes spawn their little slimes a bit far, you sometimes get hit even if you keep the distance.

You seemed to put a lot of work to make the game detailed, but it needs more to be really enjoyable. I want it to be more difficult, now it's just about running and killing.
Jeremias
03. Jan 2014 · 23:01 CET
Good job making this in 72 hours. You added many things to the game. If you make a post-compo version, I would tweak the sword fighting, because sometimes I got stuck into enemies without able to hitting them (mostly bats).
rincewind_cz
03. Jan 2014 · 23:46 CET
Really nice and polished.. way too easy and I didn't get how the theme was used.. but overall it's solid :)
mcapraro
05. Jan 2014 · 05:46 CET
WOW! this is an amazing game for 3 days. man, you really did set the bar very high! congrats!
themachinestarts
06. Jan 2014 · 00:37 CET
Way too much repeated content before the last boss and the final boss wasn't as difficult as some of the rooms before it but otherwise well done.