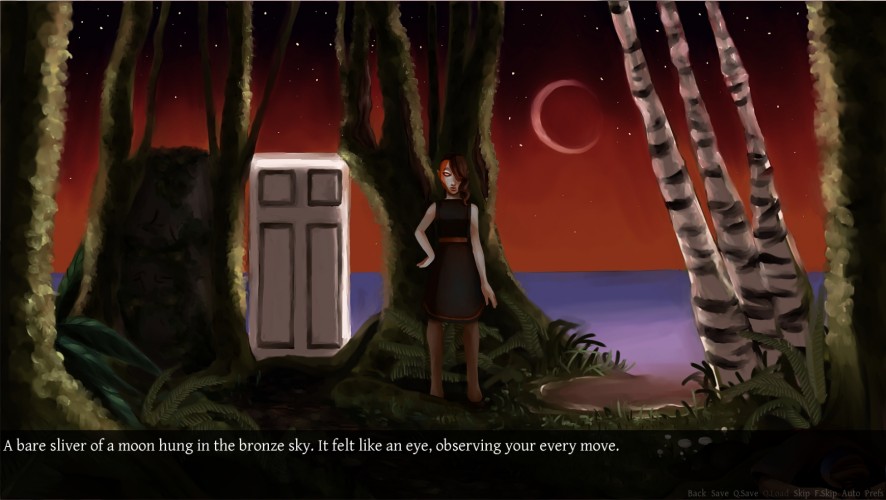 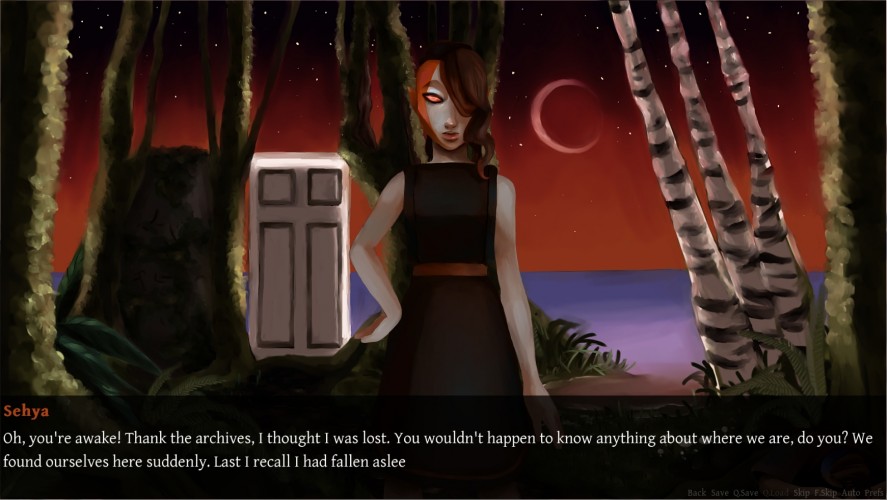 Process Journey is a first person point and click adventure/visual novel created in Ren'Py. There are six endings to find (though several just add on to one ending). Please play through to get the best ending for the most satisfying experience!

Please tell me if there are any errors so I can squash them as soon as possible. My beta testers can only do so much!
> NEXT IN RQUEUE

But the art is really beautiful and the storytelling is really well done, with a few clever twists that rely on multiple playthroughs. Good work here.
Lissar
17. Dec 2013 · 05:56 CET
Perhaps in the future I will include a darker bar on the bottom when moused over to indicate you can go back.

Really beautiful art.
incobalt
17. Dec 2013 · 08:19 CET
I really enjoyed this. I think I managed to find five endings. Two of the endings were called "Betrayed". Also, if you say you don't know what species you are then she will say that you are an Unknown, which sounded really strange.
Lissar
17. Dec 2013 · 08:32 CET
One ending is called "Betrayal", the other is "Betrayed"! (I just checked the code so I know I didn't accidentally make an error). And thanks, I put that in there as a placeholder to fix a bug that occurred when speciestype is not defined, and forgot to change it!
angelk
17. Dec 2013 · 08:38 CET
Great collection of artwork and story, it's been quite some time since I've played a point and click adventure so it was pretty nostalgic. I got two of the endings but didn't find my way to the best ending (though I was happy with the second one I got :) )
HellBlazer
17. Dec 2013 · 08:40 CET
Very cool! Great art, nicely written, good mood. Looking forward to the expanded version.
BluShine
17. Dec 2013 · 09:41 CET
I got the best ending on my first try, then got a few others. Although when I told Sehya my species was "dog", she said "oh, you're a Corsean?" I also liked the response when you tell Sehya your name is Sehya! Awesome art, and a cool story, too. The music is simple but really helps set the mood.
Lissar
17. Dec 2013 · 09:52 CET
Really? It shouldn't be like that! I'll have to fix that. Thanks for letting me know!
Lissar
17. Dec 2013 · 10:07 CET
Fixed the issue and uploaded a new version!
Lolshouse Dev Team
17. Dec 2013 · 13:41 CET
An enjoyable and well thought-out point-and-click adventure with a surprising amount of character development.
lightsoda
17. Dec 2013 · 17:12 CET
Very nice, quite enjoyed the story and character design, I was intrigued from the start. Got the best ending on my first playthrough. I think the ending song is a tad blown out though.
Lissar
17. Dec 2013 · 23:00 CET
Turns out there was another error causing people to get the final ending too easily. But I fixed THAT one now. I guess this is my fault for not knowing the quirks of Ren'Py and not being about to thoroughly test the final product before submission!
Tom 7
18. Dec 2013 · 01:33 CET
[SPOILERS]
I enjoyed this one a lot, enough to try to get all the endings. I was completely stymied on getting the "good" ending -- I had clicked everything and thought that I had even figured out what I was supposed to do in order to get the best ending, but it wouldn't acknowledge my input. I got so desperate that I looked at the source code, and then I realized that it has bugs that make it impossible to get the good ending (probably introduced when trying to fix the too-easy good ending). The bug is that you can't say

that tests first to see if variable == "a", and if not, tests that "b" is true (which it always will be in Python, I think). So the condition ALWAYS holds. You want to do something like

There are a few instances of this in the code; the first at line 260 (and a few after that) and then again later at like 788. Might have been another one somewhere.

I seem to have done everything right and gotten the "best ending" the first time. Perhaps because I downloaded it earlier, I ended up with the too-easy build? Everything I did made sense, though... If it really should take multiple plays, I'm not sure I'd have enjoyed it quite as much. Will have to try a more recent build later.

Other, random nits (which may have been fixed?):

The initial menu seemed a little too dark, like something between states.

I think I spotted a few missing words early on. Can't recall where, unfortunately--it was before I actually got to clicked around the island.

The options menu seemed oddly arranged, somewhat difficult to tell what things were about.

I was a bit thrown off by the lack of a cursor-change or indication of what was clickable. Ditto for the click-on-the-bottom to go back. (I tried clicking near the other edges, not-quite-low-enough-at-first, apparently, and pressing escape, then space, before clicking randomly until success.)
Lissar
19. Dec 2013 · 03:56 CET
Thanks for the feedback! A lot of those things I will be changing in a later version, though it would be too many changes to make on the jam release. I didn't spend any time changing the default Ren'Py UI, which is why it is so frustrating for many, I think. It wasn't built for this sort of game in mind.
Enneract
20. Dec 2013 · 00:24 CET
Fantastic and enjoyable game :) I loved the visuals.
GeorgeBroussard
20. Dec 2013 · 01:04 CET
Fun and solid entry. Nice mood and atmosphere. I got the "not enough" ending. I will bookmark to try some more.
Venks
20. Dec 2013 · 08:23 CET
Great art, story, and the mood was set exceptionally well. I have to say I really enjoyed my time with this game.
hbocao
22. Dec 2013 · 15:37 CET
I'm not a fan of the visual novel games, but I really enjoyed this one. The setting is great and graphics are so beautiful. Great entry, Lissar!
steamgirl
05. Jan 2014 · 19:22 CET
Really enjoyed it! Beautiful game, full of atmosphere! Unfortunately I had to cheat to get the good ending. I kept thinking I must have missed something in the scene because when I asked Sehya for advice she kept telling me to keep looking. Maybe after you have examined the scene fully there could be a different response. ;)
keyboardmonkey
06. Jan 2014 · 20:38 CET
This is very atmospheric! The sounds are textured to suit the art, the story is intriguing, and I'm left wanting more. Very nice work!

I'd love to see more of this project if it continues to grow post comp. I would like to ask that, if it does, to investigate ways to re-use your backgrounds with overlay character images (instead of duplicating full screen images) to reduce the overall size of the game.

Thank you for making this, and good luck!