[raw]
made by AdventureIslands for LD28 (COMPO) 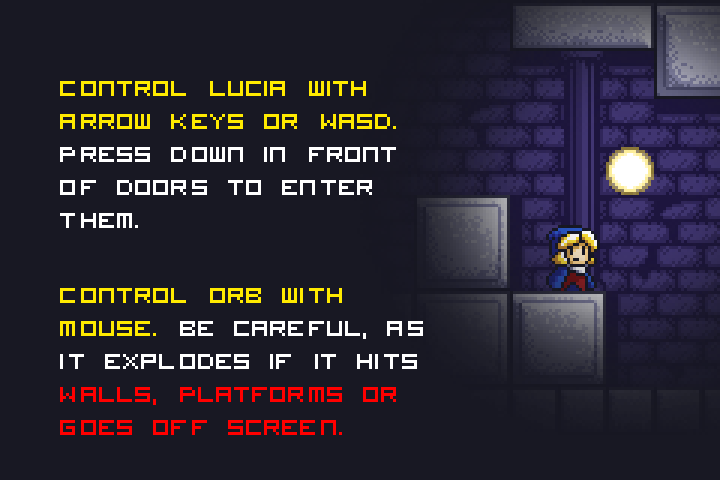 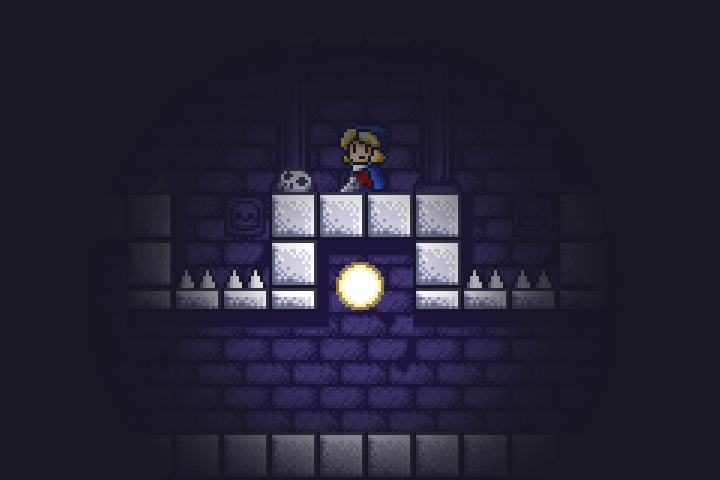 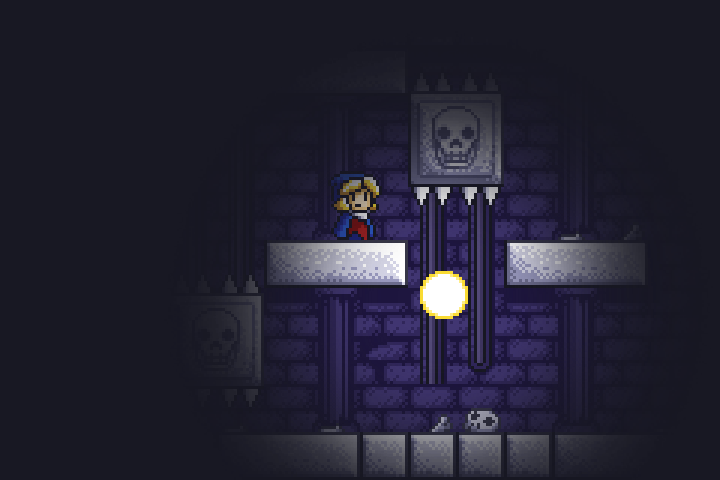 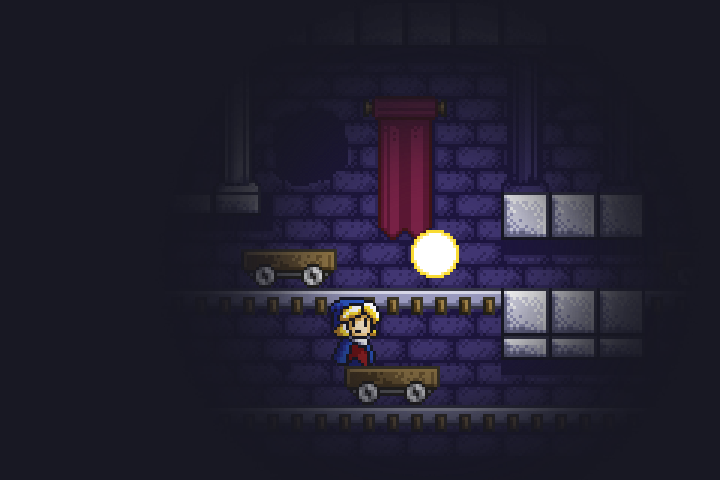 You only get one source of light!

Kingdom of Solaris has always been protected by light of holy lighthouse. One day however, the lights disappeared, plunging the kingdom into darkness..

However, all hope is not lost. One day a young wizard Lucia arrived, and used all her strength to create a ball of light powerful enough to lit the lighthouse again!

While the orb is very powerful, it's also very unstable. A slightest bump can cause the orb to explode! Lucia needs to use the orb to light her way, while trying to keep the orb intact. Will she be able to end the age of darkness?

Controls:
Use Arrow Keys or WASD to control Lucia. Press down or S to enter doors. R restarts the current room.

Use mouse to control orb of light. Beware that it explodes if it hits walls, platforms or goes off screen.

Esc returns you to main menu and skips the intro. M mutes and unmutes music
> NEXT IN RQUEUE

It's almost unbelievable how you could of made such an awesome game with great mechanic, art, story idea, all in 48hrs! Nice choice of SFX and music too!

The level that took me the most time to figure out was the first platforms-on-wheels that moves under spikes. I thought I missed a control or something (like ducking) but sure enough, the light revealed there was a way underneath!
Well done :)
Zekyon
17. Dec 2013 · 01:01 CET
Very innovating the idea of control two character!, maybe I lacked some checkpoints, is too frustrating when you are in the end of the level and you fall off or you die.

The level design is awesome, with very good idea (I loved the chariot and spikes level - and the autoscrolling ones are nice too but very very hard). I bet this game will end up in the top game of the compo (and it 100% deserves it)!
loggs2
17. Dec 2013 · 18:14 CET
I thought your mechanic was very unique and interesting. It was really polished and really fun - I enjoyed playing a lot!
kalth.streil
17. Dec 2013 · 19:07 CET
Loved it :)

The sprites blend amazingly and the ball gameplay fits the theme perfectly, while being very original. However, the music is a bit annoying, and sorta makes you want to rush, which is the opposite of what you actually have to do!

At first it's a bit hard to get used to the ball not being affected by gravity (I was afraid to stop clicking haha), but then it's nice :D

Great, great, great!
Markavian
17. Dec 2013 · 21:27 CET
That was pretty amazing as a game, I really struggled on the final level, but only because the additional skill of moving and controlling the orb at the same time overwhelmed me. Maybe a slower moving wall level earlier on to introduce that mechanic might have helper prepare me, but overall a really fun and well polished game.
JohnnySix
17. Dec 2013 · 21:43 CET
Wow, awesome. It was addictive as hell, keep going for one more try, especially the later levels that rely on timing. Great stuff!
Cawrtz
17. Dec 2013 · 22:04 CET
Excellent game. The levels are well designed, the art is beautiful, the music is very cool. Nicely done !
cesisco
17. Dec 2013 · 22:21 CET
Awesome game mechanic!It would work like a charm with a xbox controller pad.
kookoon
17. Dec 2013 · 22:32 CET
Loved the mechanic to coordinate the orb and Lucia.
Really nice idea, lot of fun, pretty graphics and music!
Keith Evans
17. Dec 2013 · 22:49 CET
really good, best game I've played so far. Great job! Really impressive Jam game.
ResonantCraft
17. Dec 2013 · 23:17 CET
Solid entry made in only 48 hours. The learning curve is very well handled for a fantastic final level. Kept me entertained until the end. Only one little thing: I didn't expect the orb to break on wood but it is nitpicking. Good job overall.
Jezzamon
17. Dec 2013 · 23:25 CET
Amazing that you could make all that in 48 hours!

This was really novel! Though I associated it with those analog games of passing a ring through a wire maze, it was really interesting how you made that into a game! =D
dylanwolf
20. Dec 2013 · 02:17 CET
Neat concept, and the first several levels are very well paced. It's a very polished game. I love the pixel art graphics style.
Venks
20. Dec 2013 · 08:14 CET
Really like everything about this game. The platforming, the music, the art, the design. It's all top notch. Great stuff!
The Evil Cult
20. Dec 2013 · 09:05 CET
Been following your games since Tiny Island and this one again didn't disappoint :) Fantastic art, good music, loved the way you put the story into it, and a very unique and cool gameplay concept! Challenge level was pretty spot on also, last level took me about 5-6 tries maybe, and almost got to the point of platformer rage as it was hard to concentrate on controlling the orb and the avatar at once but it wasn't too frustrating either. If I had to make any suggestions I'd say make the light colliding with stuff a bit more forgiving, maybe have it take a couple of hits to die or make the hitbox a bit smaller, but it was pretty good as it was anyway.
unusualcadence
20. Dec 2013 · 15:25 CET
Always enjoy playing your games, they're polished, nice to look at and always have a fun take on the platformer genre!
koe415
20. Dec 2013 · 23:18 CET
Great game play! Use of both WASD and mouse worked really well in your puzzles. Art was very polished as were your puzzles. Great job!
barkergames
21. Dec 2013 · 01:56 CET
I love it!
lightsoda
22. Dec 2013 · 03:14 CET
Still torn about what I think about this style of gameplay, it might be too much for me to consider it fun, it's quite challenging, I'll give you that.

I like the idea, and you had some clever level design that got progressively harder, while keeping them pretty short, which was great.

The only thing I missed was a small intro to each level (for example, just a text floating saying "Level 1"). Otherwise that last level gets a little bit frustrating (It lacks that small break at the start)
loxo
22. Dec 2013 · 19:12 CET
Overall a great game! Very polished and good level design. But I couldn't get past the moving wall with spikes.
Eniko
25. Dec 2013 · 17:27 CET
Nice graphics, neat concept, good execution! All in all, a really great game! On the second level I managed to stand on the block below the pillar way to the right. Not sure if that's intentional. Also, I didn't much enjoy the last level, but that's probably cause I sucked at it. :P
henrykun
26. Dec 2013 · 00:58 CET
This is one of my favorite games so far. I really doubted it was made in 48 hours, it's really polished. The only thing I found a bit difficult, was to play with the touchpad but it's not your fault of couse.Very well done.
Husky
26. Dec 2013 · 05:49 CET
It's a good idea! :D
Very challenging stages.
Jan Marcano
26. Dec 2013 · 22:02 CET
As always I love your art-style!

The main mechanic reminds me of a prototype of a game I made, it felt warm inside <3

Great job! Very polished as usual from your entries. It was really fun :) My only complaint is that the difficulty was maybe a bit too low on the first levels. It escalated well towards the end though!