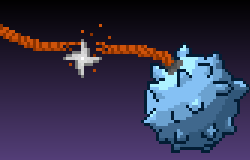 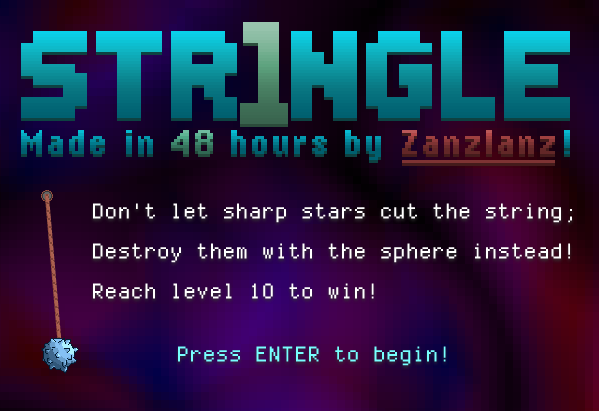 Hope you enjoy Str1ngle!
Feel free to skim the sections below if you're interested :D

It's *really* difficult! Good luck!
Play it a few times, because over time you'll definitely get better. :)

Best name I could come up with, haha ;)

===== Concept =====
So the concept is very abstract! You're a tethered wrecking ball, whose rope is being attacked by ninja stars in space! You must defend your one and only rope, for whatever it takes.

===== Beginning =====
When I heard the theme, I had no idea what to make (as did many of you)! So I started off with 'Just One' rotating box in the middle of the screen. After I attached a string to it, I realized what my game would be.

===== Timelapse and Live stream =====
I live streamed whenever I was awake, on http://twitch.tv/zanzlanz.
Timelapse: https://youtu.be/19MqTBOCpUE

I need to thank every one of you who watched my stream, even for a minute. It was quite a party, with over 50 people on at one point!! So thanks so much. And a special thanks to Starry (@StarrylLeaf) for finding a game-breaking bug in the last hour. And also that to Boodog, who also found one (he's the first comment)!

===== What the game lacks =====
- Replayability is low, I didn't have time to add a scoreboard, or even save high scores.
- Easier tutorial. Would help for people who can't grasp the random concept I came up with.
- Points-until-next-level meter. I wanted to add it, but never had the time.
- A lot of other, smaller stuff! xD

I could expand upon it in the future, but for now I just want to sleep...

I also thought of the next level meter, Bogden, but I ran out of time before it came into priority. A fast-paced game with slow-progression is pretty bad design. I should have changed that!
Zanzlanz
16. Dec 2013 · 23:33 CET
d__adee! The screen shaking is too random, I should have put a cap on it. So much to do, so little time! xD Thanks!
BradleySmith
16. Dec 2013 · 23:46 CET
Oh man, this is so much fun! xD Rated highly!
gmfk07
16. Dec 2013 · 23:47 CET
An overall interesting game. It's good that you caught the fact that you could cheat the system by doing nothing. Also, it lags a LOT whenever you get the powerup for me.
ocmu
16. Dec 2013 · 23:47 CET
This. Game. Is. Great.
FrozenCow
16. Dec 2013 · 23:52 CET
Dude, the music, those powerups, the screenshakes and the slowdowns... It makes this game so enjoyable! I have no idea why there is a basketball with a string and stars, knifes and other weird sharp things flying around, but I'm amazed how well this plays. Nice job.
desmarkie
16. Dec 2013 · 23:59 CET
This is good fun. Love the feeling of inertia and just enough control to make it all feel right.
redhotvengeance
17. Dec 2013 · 00:37 CET
Really nice work. Good production value, good playability. Keeps you motivated to keep playing. Excellent job.
SerialVelocity
17. Dec 2013 · 00:41 CET
Great work! Although one or two stars aimed directly at the centre of the screen making them impossible to dodge. Really fun
BoaHeck_ArtGent
17. Dec 2013 · 00:41 CET
Great fun for a bit of a play. I made level 3.
Zanzlanz
17. Dec 2013 · 01:07 CET
Thanks *everyone* for playing, rating, and commenting! Went off to check out some awesome games and came back surprised to see a flow of comments <3!

gmfk07, I was contemplating for a few hours on how to make that not an issue! Thanks to some Skype buds for helping me brainstorm! Sorry about the lag. I realized this when I played at school (shh!). The slow-down effect doesn't help in that case, haha! Hope it didn't ruin the game for you!

FrozenCow! Thank you!! Once I got the idea for it, I knew it had to be very powerful and trippy. I don't know where the idea game from either, and it's kinda awkward to explain to people, haha :)

Desmarkie, that's exactly what I was hoping for! Thanks!

Xaedes and HeyChinaski, the background is actually pretty easy! I used Flash's Perlin noise function. Feel free to download the source if you want. But this site has a really cool code generator that makes it much easier to set up:

It took me two times to win - first time, I made it to level 8. Had lots of fun.
I did notice that the game started getting really slow around levels 6-7 when there were more things flying around. It was especially slow when I had the torch + projectile powerups at the same time - I suspect that the high number of particles was the culprit.

Thanks Symmeteer, and great job beating it in only 2 tries! :)
You're right about the lag. I wish Flash was just a tad bit faster, haha, because I loooove particles a lot!

Gosh, that's a very generous rating olafsworld98! Thanks so much :D

xk - that's exactly my intentions! :3
nka
19. Dec 2013 · 22:09 CET
Very impressive! I love this psychedelic background. Awesome particles and slow-mo. Music is just perfect as always in your games. I kinda want this game ported on ios.
Zanzlanz
19. Dec 2013 · 22:59 CET
nka, thank you! I do want to make a sequel, improving the overall game play and adding much more content.
Maybe if I can set it up just right, it'll work well on iOS! :D
olafsworld98
23. Dec 2013 · 02:11 CET
three words :awesome, awesome, awesome!
TheAdventMaster
24. Dec 2013 · 04:45 CET
This game is beautiful! Radial-controlled games are normally AWFUL because of the springy nature of controls being really difficult to use, but you did a great job countering that with very responsive "overriding" of the ball's momentum.

And thank you Nyrrrr! I was hoping for that ;D