Jameson The Pilot by rezoner 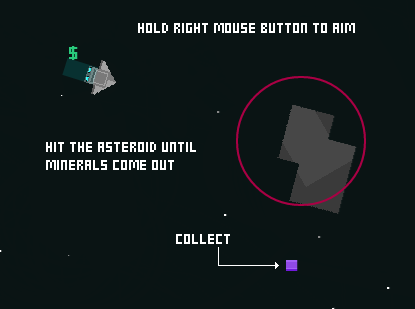 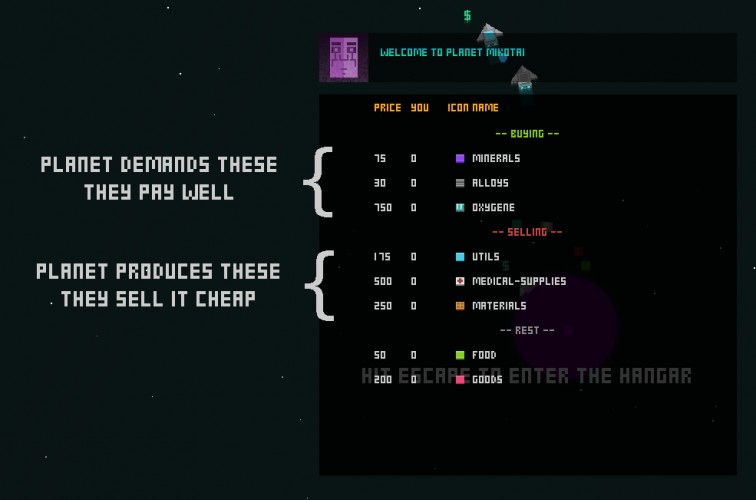 You have only one life - and only one cargo bay.

Space exploration sandbox. Become a trader, pirate or a bounty hunter. Instructions in link.
> NEXT IN RQUEUE

Sounds like the feature list for a AAA game. How the hell did you do this in 48 hrs?

I stumbled upon this game while searching for other space games since I made one too, and I realised you really thought about the gameplay here!

The aesthetic is absolutely gorgeous, the sound is a perfect fit, and the gameplay is deep and engaging.

It depends on how you look at 48h - it is actually equivalent 6 working days :)

The only hard part on AI was the autopilot that can take you to any destination successfully land on a planet and avoid collisions. Once you have that the rest is just a simple state-machine that is deciding what should be the next destination.

For each planet there are cached trading routes (where can I take the stock to earn on it) - these are randomly picked by traders who land on a planet.

Anything that lands on planet and has cargo automatically sells it.

Piracy, mining, bounty-hunting, trading - it is everything similar action - what differs are just the destinations.

Then there are some little exceptions like - mining - is observing the asteroid for spawning anything - and then switch destination to the spawned thing. Observer if there is anything in cargo bay - if yes - switch destination to planet (autopilot will take authority over AI as soon as it gets in gravity range)

I know that's technically this is not very explanatory. But technically it is just a state-machine :)
rezoner
17. Dec 2013 · 00:27 CET
Oh my, need to take a nap. My linguistic skills are diminishing.

The combat-system isn't too great, since I never managed to evade enemy shots. My fights ended up with whoever had the better ship winning. But well... maybe that's just how it goes :)
van noctar
18. Dec 2013 · 16:27 CET
I like the game mechanics!!
Xaychru04
18. Dec 2013 · 16:51 CET
Awesome space game! I like the deep mood of this game, and I'm pretty impressed with the content you put in a such little amount of time! Neat graphics and sfxs, excellent job! :D
Joror
18. Dec 2013 · 17:35 CET
Nice complete concept - especially liked the landing mechanic.
JoeManaco
18. Dec 2013 · 18:26 CET
very good job
Madball
18. Dec 2013 · 18:58 CET
Warning! Epicness limit exceeded!
Really fun game. I was playing it for about an hour. It has a plenty of possibilities. AI? Pirate planets? Medical supplies those don't heal but cost a plenty? That's how do you make an epic game.

Mining seems poor. I didn't mine a lot, but those four pieces of stone don't make me want to mine. Do I get better goods from them as I progress? I should get, otherwise it's unprofitable.
Also, I would like to see more information about ships. They have more stats than speed and amount of slots.
What is space for? Slow motion? Then I don't want it to disable when I right-click.

I hope that you'll continue working on it. I expect you to make mining, trading and fighting equally profitable. Like, you get rare minerals from mining, you get a bounty when fighting pirates and some other cool stuff when being a pirate.
xhunterko
18. Dec 2013 · 19:08 CET
Very nice. A little confused how it worked with the theme until I tried to mine more then one ore. Coulda told me about that though. Nice idea!
Jishenaz
18. Dec 2013 · 20:05 CET
The controls were a little odd at first, but I got used to them pretty quickly. Beautiful game!
ENDESGA
19. Dec 2013 · 08:02 CET
Awesome game yet again Rezoner!
I love the graphics! They're amazing! The feel and gameplay of it is awesome too :)

Love the Elite references, but also you've given the docking it's own twist with the planet landing mechanic. (See also, Escape Velocity)

Stylishly designed so it looks great.