[raw]
made by AaronGordon for LD28 (JAM) 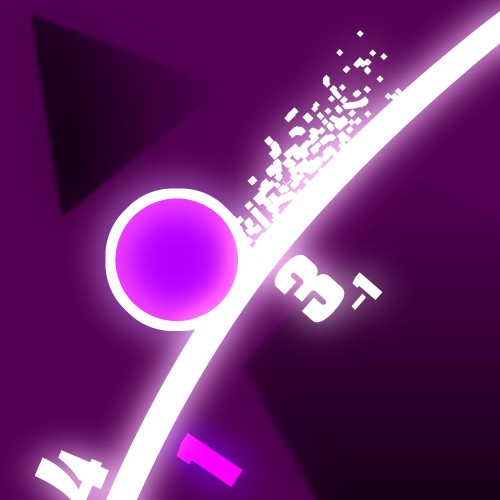 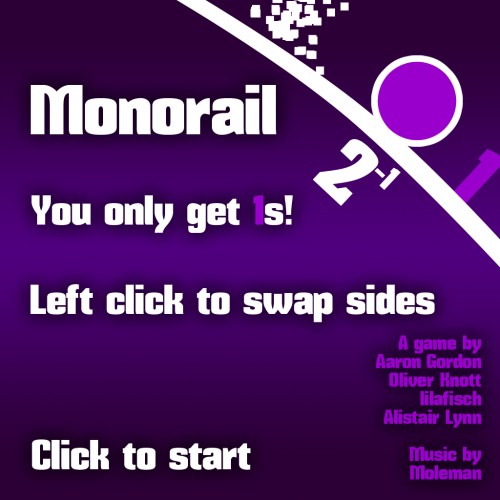 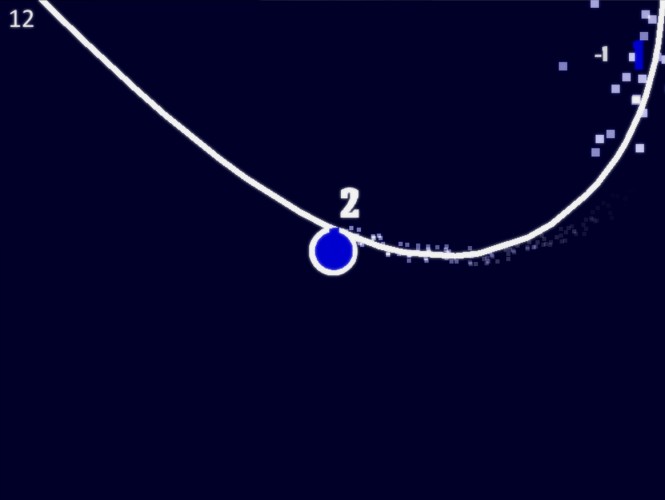 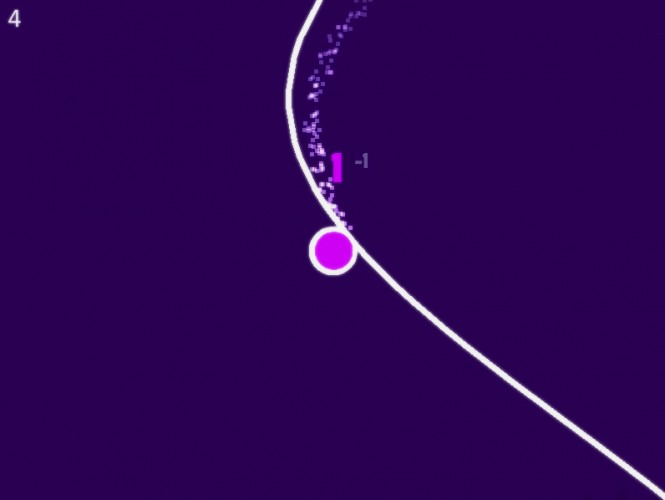 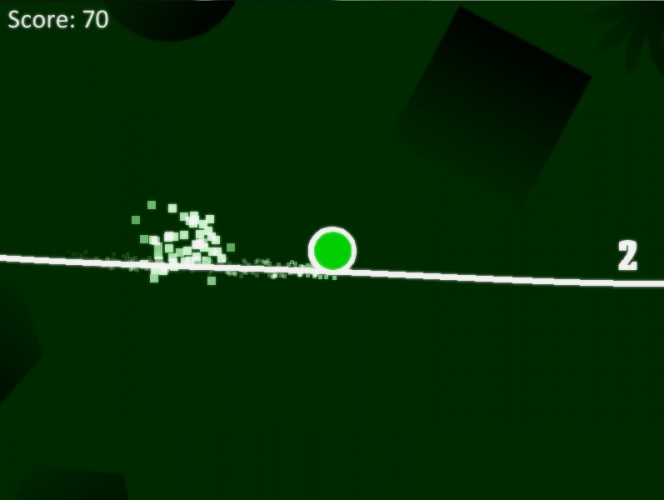 Ride along the rail and crash through the "1"s as you try to avoid the rest!

Pass the other numbers on the opposite side to subtract one from them. Crash through enough "1"s to proceed to the next level.

To play the game:

Please note that the latest version of Java is required to play Monorail.

Special thanks to Sam Phippen

incobalt
17. Dec 2013 · 00:37 CET
A simple concept, but actually quite fun. Closing out of the main window (in Windows) is strange and just opens a new instance of the game using the batch file (just had to close the cmd.exe to get out).
AlanZucconi
17. Dec 2013 · 02:02 CET
Very nice graphics! :D
asimilon
17. Dec 2013 · 02:16 CET
launch command script didn't work for me in OSX Lion, but just copy/pasted the code into terminal and it worked, nice game!
peacegiverman
17. Dec 2013 · 02:18 CET
Well done!
Crabman
17. Dec 2013 · 02:18 CET
Really nice, love it! The soundtrack is fantastic, too.
Flux
17. Dec 2013 · 02:19 CET
Super relaxing and zen-like... really cool! Surprisingly challenging when going around curves. Could be the next super hexagon with polish tbh!!
torcado194
17. Dec 2013 · 02:20 CET
wow that was very cool! i like the minimalistic graphics, and the theme is relevant in this one. good job!
SoundGuy
17. Dec 2013 · 03:23 CET
very nice simlpe concept and great delivery and polish!
j_stirk
17. Dec 2013 · 03:35 CET
Really fantastic. Simple concept, and nicely polished. Really digging the atmosphere with the audio, music and graphics.
bluemanshoe
17. Dec 2013 · 04:32 CET
The graphics didn't line up for me. The line was not at the midway point between the numbers which made it difficult to judge which side I was on. Ubuntu 12.04, using java-7-oracle jre
Bribz
17. Dec 2013 · 19:58 CET
Just a side note, the game kept relaunching for me until I closed the console. Intended or unintended.
The concept is great, the game is interesting, as well as a bit addictive.
It wasn't clear to the players that the numbers would count down if they weren't hit by the players.
The switching at times seemed a bit wonky and the player might hit the number while switching, but nothing too game-breakingly unpredictable.
Overall, the game looks good, sounds good, and plays well!
Benjamin
17. Dec 2013 · 20:12 CET
Beautiful and relaxing. I wish I could accelerate on lower level. When you replay it for 5-6th time they start to be boring.

If you want to keep one button maybe try to accelerate on hold click. The problem would be you can't swap on release, but having to release to click again can be a problem especially if you're fast.

Or maybe : The speed always increase and it decreases on swap. So you can try to go full throttle by just making making necessary swaps, or brake hard by double or triple swap.

Anyways congrats for the great intro, your song is still playing while I'm writing it's so good.
Those 30 Ninjas
17. Dec 2013 · 21:40 CET
nice looking and pretty relaxing game
ninjacharlie
17. Dec 2013 · 21:40 CET
This was actually a lot harder than I thought it would be, I liked it. Maybe a little more randomization of the tracks would be cool, but other than that, nice execution. :D
Monoquartz
17. Dec 2013 · 21:41 CET
Good job, graphics are simple but looks cool :)
psychomonster
17. Dec 2013 · 21:42 CET
Not working on win8 :/ But the screens are looking nice :)
Riilu
17. Dec 2013 · 21:45 CET
A very nice game, the visuals are excellent, the game is fun and challenging. The music is good, the sound effects are maybe a bit simplistic, but they serve their purpose. The game looks great, it plays smoothly and is just pleasing in general.
HellBlazer
17. Dec 2013 · 22:08 CET
Love the extremely literal take on the theme. :) Simple, but fun and addictive. Nice work.
J
18. Dec 2013 · 01:08 CET
There are some great concepts in here. I love the idea of a nonlinear, potentially self-crossing track, and the way numbers decrease, changing the path you have to take on successive laps.

The only thing I dislike is how slowly the speed increases. A higher difficulty setting would be very nice.

Also, don't use Zip for the Linux version, because it doesn't preserve permissions - the script needs to be executable (and a #! line would be nice).
Espyo
18. Dec 2013 · 01:10 CET
It doesn't seem to clear the screen after every frame here. This causes the game to bleed out, and after some seconds, a lot of the screen is white, which makes it hard to see! I'm using Windows 7, 64-bit. It must have something to do with these errors the console reports:

It's nice the you tried to make seamless levels, but switching from between them had no animation and was too abrupt. Also, if only (notable) differences were the color and the numbers positions... There's no increase on the speed, no new challenges... this made the game somewhat boring after a while...

Perhaps I didn't play far enough and it would get faster and more challenging - I did stop after 4 or 5 swaps. But those are my only complaints.