A Ronin Heart by TijmenTio

[raw]
made by TijmenTio for LD28 (COMPO) 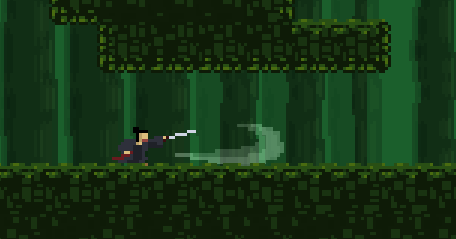 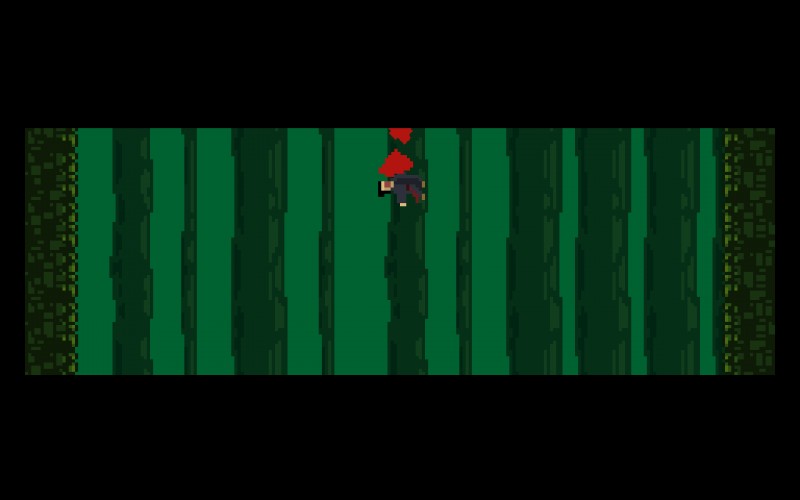 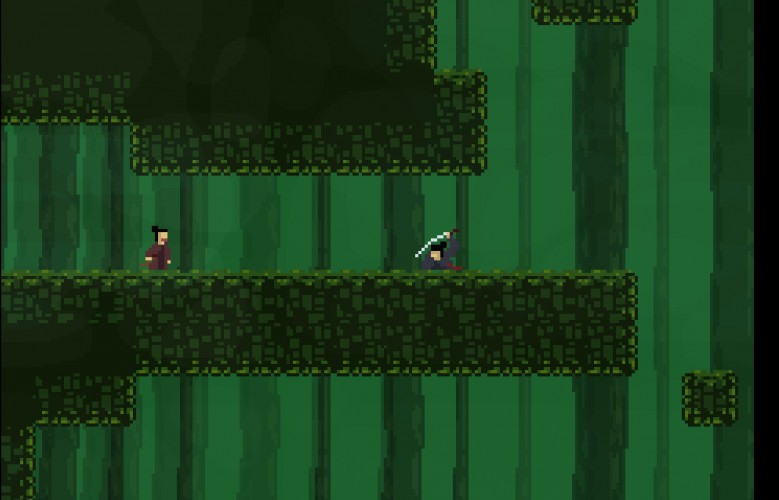 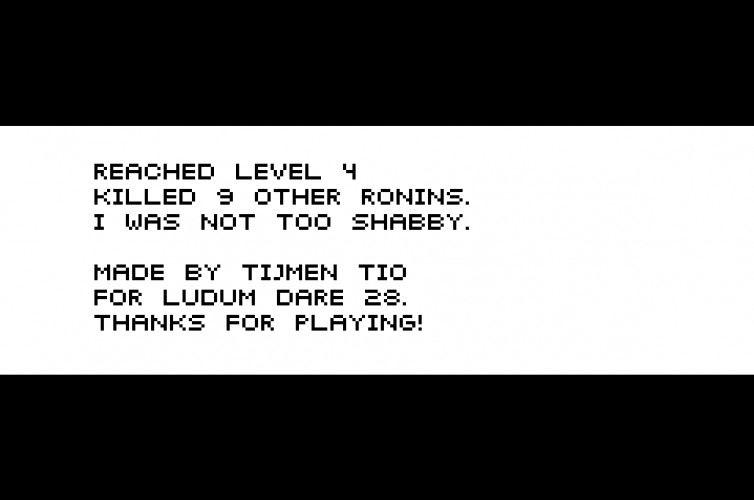 Tried something to make fullscreen work for everyone, let me know if it worked. ALSO you can press F4 to gently leave the fullscreen mode huray.

He was banned from his land,
his heart was stolen, replaced by a steel, artificial one.
Now he wanders the wild, turning into a cold blooded killer.

Arrow keys+spacebar
If you get hit, you'll have 5 seconds to grab the steel heart you lost, otherwise you die.

DAMN why did I make such a depressing game... next time I'll make something more joyful, anyways thanks for playing!

SonnyBone
16. Dec 2013 · 07:33 CET
Game loads up to a black screen and I hear what sounds like text typing. Game Maker games don't always work in full-screen and I see that yours launches that way. Try disabling full-screen on launch or tick one of those 'v-sync' or whatever options if you can. I WANNA PLAY!
caranha
16. Dec 2013 · 08:51 CET
(Sucks to be you, Sonny, this game runs fine under wine :-))

Tijmen, your games are always Awesome, but this one takes the cake! I loved the variety of movements of the samurai, such as how his blade can go in many different directions during the double jump, and how you can use defense to freeze enemies and turn them around for a backstab.

I got all the way to the second stage after the Lv3 enemies start appearing. I'll certainly be playing this more later.

Two suggestions:
1- As is common in this kind of games, often I would go into "where the hell is that last enemy" mode. Maybe add an arrow to point towards the nearest enemy if you spend more than X seconds without fighting?
2- Sometimes the AI would get stuck, and I could kill it at my leisure. This often happened when the AI was facing a step wall with me at their back.

Thanks for the awesome game! Have all my stars!
AlanZucconi
16. Dec 2013 · 13:39 CET
Ohh! Your pixel art is so nice! *_*
meek
16. Dec 2013 · 14:00 CET
This is ridiculously awesome. Lots of polish considering the time frame. Commend you completely!
DustyStylus
16. Dec 2013 · 14:02 CET
Crikey that's a tough game (or I totally suck at it, which is entirely possible)! Immensely beautiful game, the production values are superb. Reminds me a wee bit of The Last Samurai.
fysx
16. Dec 2013 · 14:06 CET
This game has a very nice overall feel and great atmosphere! Also the level generation is well done! Found it a tad too challenging (i.e. the knockback is very unforgiving when falling down a ledge).
Jhelle
16. Dec 2013 · 14:06 CET
Great game. All the little effects like the fog, animations, blood, screen effects when without a heart, impact of the swords and eerie music make a real tense experience. One thing that detracted from that experience was the flip animation which didn't really feel in place.

The graphics are awesome, the gameplay works good. I'm missing the theme bit though.
SonnyBone
16. Dec 2013 · 18:51 CET
Thanks for the re-release to fix the full-screen issue. I need to look into why I'm having this problem before I start playing too many games.

I love how tiny your sprites are yet how lively and pronounced they become in the actual game. Your color palette is very nice.

Procedural levels? AWESOME! I didn't run into any issues with unreachable areas so that's a great accomplishment, man.

The platforming is very tight and the double jump is so sweet (I think the flip is wonderful). Swordplay looks and feels great and you have a good block system in place. The enemies can be a bit dumb but that just makes them more fun to murdertality. AND THE BLOOD! It sticks to your world tiles, which is awesome. I wanted to do that in my game but didn't have time. JEALOUS!

The sfx are great, music is good, and you have a neat interpretation of the theme that's unique. The steel heart idea is really rad.

The controls were really tight and the battle system was really fun. What amaze me the most in this aspect was the fact the I was able to hit while spinning in mid-air! Now, that felt great! Also, the way everything gets red as the timer shows when you are hit made me really nervous to get back to the heart. (By the way, this reminded me of Yoshi's Island...)

The graphics were superb. I'm a sucker for pixel art stuff, but this was something else!

The song was good, but what most got my attention were the sfx. They added so much feedback to any action in the game...

I wasn't able to finish it, though. :(
It ran so slowly on my computer that I gave up on my third try...
But I'll play it again on a better computer! =D
SaintHeiser
17. Dec 2013 · 14:40 CET
Extremely fun game! Story is good too. Good work!
TobiasNL
17. Dec 2013 · 19:49 CET
Good game, loved the gameplay. Simple yet effective graphics. The music wasn't too good though, atleast not for a longer play-run. Nice job man
vandriver
18. Dec 2013 · 00:46 CET
This is my favorite pixel art style: really fat pixels that don't by themselves show much, but tons of fluid animation to make them pop to life. Really well done.

I spent a crapton of time in between levels waiting for them to load, though!
dalbinblue
18. Dec 2013 · 05:11 CET
Really nice fast paced action, really tight controls as well which is uncommon in games made in 48 hours. I really enjoyed it.
Ditto
18. Dec 2013 · 16:59 CET
Hoooooly fucking shit dude, this is sooo sweet! My first kill actually made me shout "WOAAAH" out loud! :D I kinda miss an upwards attack, but holy damn this game is solid! great work!
bentog
19. Dec 2013 · 02:42 CET
This is near-perfection, the controls are tight, everything is responsive, the music fits the mood very well. It is very rewarding to kill a foe mid-air. Amazing.
Alex Rose
19. Dec 2013 · 23:03 CET
Dude, I can't believe I hadn't played this yet, this is AWESOME.

The combat is so fluid and lovely! The blood splatter is awesome. The narrative is really cool, the music is cool too. Just everything about this is great.

The only thing that grinded with me initially was how fast the camera turned when you switched direction, but I got used to it almost instantly and it turned out to be really useful.

Very, very well made, polished, lovely. Physics are great. Superb.
lordjosephdeburg
21. Dec 2013 · 21:41 CET
When I saw you made this with gamemaker studio I was excited to see what you had made. I was not disappointed! Near flawless game, really solid combat 5 stars well done!
goerp
22. Dec 2013 · 15:18 CET
Once again, very beautiful pixel graphics.
Great story, and the mood was well captured. The music fitted the oriental theme.
I like that there's a difficulty grade with other characters coming in. The enemies moved nice too, not just stupid drones.
What wasn't very clear for me was when I finished a level. At first I thought I died and had no idea why.
kutullu
23. Dec 2013 · 11:35 CET
Holy cow. Loved every minute I spend with this. Art, gameplay, atmosphere, background story... stunning achievement!

Cheers, Marcus
Jupiter_Hadley
24. Dec 2013 · 22:46 CET
The loading screen takes a while, but its really worth it. I included it in part 10 of my Ludum Dare Compilation video series, if you'd like to take a look :) http://youtu.be/iZspNc9Kmjk
zkenshin
25. Dec 2013 · 02:38 CET
Maybe a dash or sprint move would have been neat, but really like the movement anyways, nice entry. :)
Antylum
25. Dec 2013 · 10:36 CET
Very nice stylish visuals and great feel! Thank you for creating this game)
Gungnir
25. Dec 2013 · 16:24 CET
Amazing work! Super appealing visuals, animation and control-feel. Great atmosphere, and even nails the theme in an innovative and complementary (to play) way. Top marks.
OrangeeZ
26. Dec 2013 · 08:50 CET
Awesome entry! I loved pretty much everything about it, although it would be nice if you could replay current level after dying, not be forced to start from level 1.
sykotomy
28. Dec 2013 · 05:21 CET
This was a really cool game. However I think I got stuck in a level that you couldn't beat. Any way, it was fun to play and the graphics were amazing.
csanyk
30. Dec 2013 · 00:00 CET
Wow, this is fantastic.
jimmypaulin
31. Dec 2013 · 16:32 CET
Superb graphics and feel to this - the sounds are so atmospheric and really add punch to the swordplay. I like the double jump as well, it fells very well tuned. I didn't like the loading times - they were painful. I'd rather have been permitted a few tries at the same level rather than generating a new one every time.
Raphy
01. Jan 2014 · 15:43 CET
Great game, very good work ! Congrats
NightShadow0
01. Jan 2014 · 20:08 CET
Damn, this is great. My only complaint is how the camera moves around so much, it's really disorienting. Awesome work!
Ludipe
05. Jan 2014 · 21:57 CET
I loved the game and it'd be awesome to play a post-compo version. Great job, just work a bit more on the AI and the loading screens (too many of them and too long)