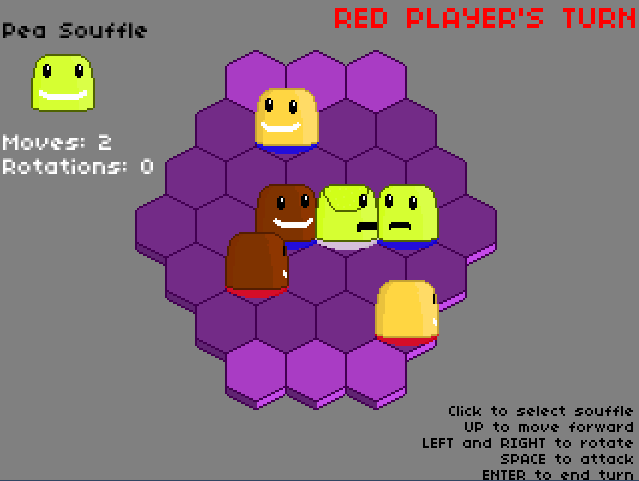 A board game for 2 players. The goal is to eliminate the other team by eating their souffles.

Rules:
You can move as many souffles as you want during a turn
You can only attack once per turn
You can't attack from the front
Attacking from behind deals double damage
If you attack a chocolate souffle, you won't be able to attack next turn.
Chocolate souffles deal double damage.
Pea souffles can move more, but their turning circle is limited.
Egg souffles can rotate more, but can only move one hex per turn.

I haven't had time to test this game extensively, so there might be a few bugs here and there.
> NEXT IN RQUEUE

I also found it hard to remember which souffles can/can't bite, so ended up wasting a lot of moves/turns. Perhaps add an option to undo my turn so I can take it again?
Entity2d
27. Mar 2012 · 22:15 CEST
I'm considering improving this game. I have no experience with AI, but I'll give it a shot.