[raw]
made by SimianLogic for LD32 (JAM) 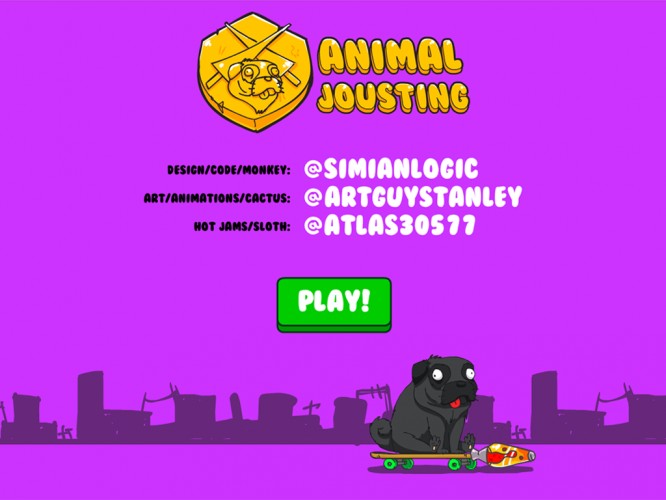 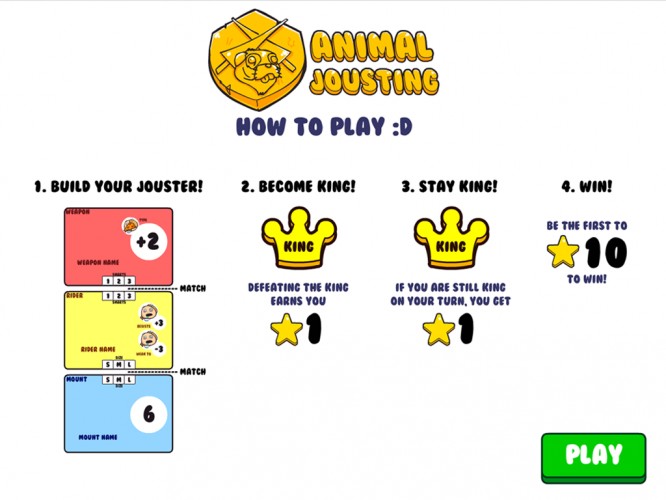 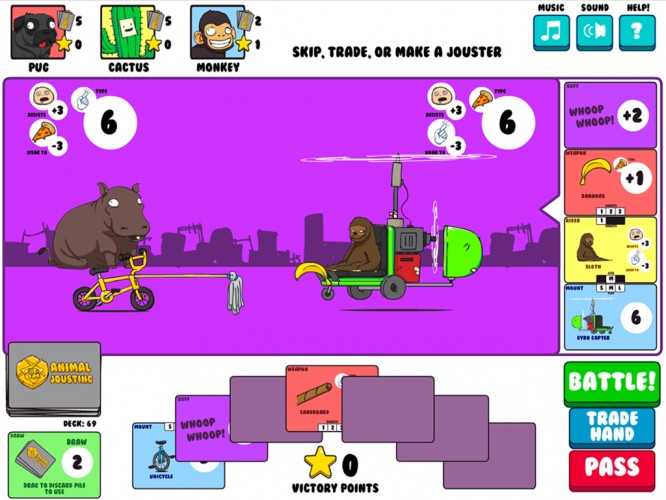 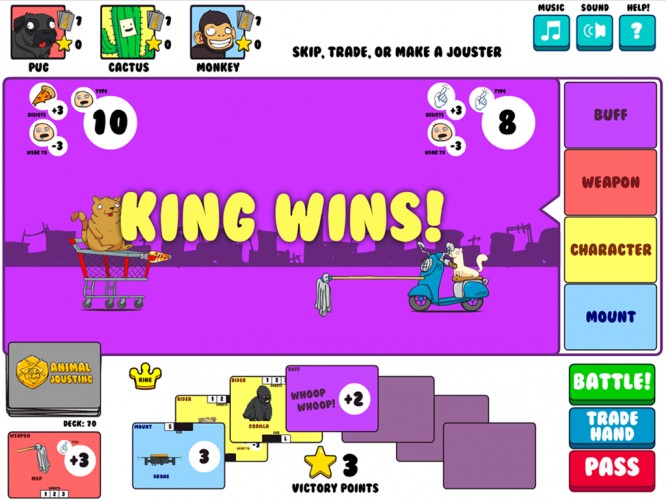 Animal Jousting is a party-style card game for 3-5 players. There are 5 types of cards:

Mount -- your jousting vehicle. Can be S/M/L and gives you POWER.
Rider -- S/M/L, can only ride on mounts their size or BIGGER. Riders have 1/2/3 INTELLIGENCE, as well as a weakness and a strength.
Weapon -- Requires 1/2/3 Intelligence. Grants POWER. Will be of damage type Poking/Distracting/Food
Draw -- drag onto the discard pile to draw more cards
Buff -- single-use combat buff

MAY THE BEST JOUSTER WIN

(Sadly we ran out of time before getting the actual joust animation working, but the game should be playable and winnable).

wg_phancock
21. Apr 2015 · 03:55 UTC
Interesting idea with the hand passing, etc. Also great artwork. Takes a while to figure out a good strategy.
ChronoDK
21. Apr 2015 · 06:02 UTC
Impressive work! Very nice graphics, and so much of it! Liked the mechanics too, definitely one of the better card games in the competition.
Karai17
21. Apr 2015 · 09:58 UTC
Interesting and fun, if a little buggy. I liked the artwork and the silly weapons a lot. The audio got a bit repetitive, though. Good job!
rudra
21. Apr 2015 · 20:58 UTC
Funny and interesting. The art is pretty well too ! Good job !
chromebookbob
21. Apr 2015 · 21:01 UTC
A panda with a laser pointer on a drone!
little_polygon
21. Apr 2015 · 21:21 UTC
Fun! The art is pretty great except the color choices hurt the eyes. Try generally cranking down that saturation, use tone (lights and darks) more so than color to control what draws the eye. Use higher saturation minimally to make stuff pop usually mid saturation is more then enough.
monkeedude1212
21. Apr 2015 · 22:08 UTC
Music felt a bit weird for gameplay. Couldn't seem to get the actual jousting part of the gameplay working.
Shugor
21. Apr 2015 · 22:53 UTC
I rarely see anyone make card games for Ludum Dare, but this one is really well done. It's a lot of fun to see how many combinations of cards you can make, even if it's unable to stay undefeated for long. It would be amazing if this could be developed more, especially if the ability to customize decks or play against other people was added. As it is, this is still a really cool game~
local minimum
22. Apr 2015 · 20:26 UTC
I didn't bother too much with the fighting mechanics, I was having too much fun just seeing how you built your mounted animals. Gorilla with pug as weapon seemed hard to beat. Naturally. Very fun. Only a pity one didn't get to see the clash and the looser flying away. I didn't really get if there was a limit to how many cards could be drawn from the deck to fill out the hand and since I didn't see any limit to it, the draw two cards seemed no so useful. If drawing extra cards cost something more obviously. Or maybe add a card that allows for other cards to be trashed while still maintaining the turn? I got to 6 victory points, and it would have been nice with an indicator showing the first to (now) 7 in game. But other than that, a fantastically fun game.
Demy
25. Apr 2015 · 08:08 UTC
Such card game, much fun. I love card games and this one is good and funny.
Stechas
25. Apr 2015 · 08:15 UTC
Graphically very attractive game with plenty of combination, it's so much fun. Good job!
Boberro
27. Apr 2015 · 21:10 UTC
I'm not sure if AI even plays, they didn't do anything more than hand passing, but still. I'd gladly play Animal Jousting as a real card game. Think of print on demand version, really.
LeftRight92
27. Apr 2015 · 21:12 UTC
Pretty much a flawless game, nicely done. Lots of fun!
norwalnate13
27. Apr 2015 · 22:32 UTC
I literally have no idea what I'm supposed to do. I start your game and it just starts flipping out cards like nobody's business. A tutorial would be helpful and not just text in the description.
Zener
30. Apr 2015 · 18:43 UTC
Hilarious!! Very fun to play!
Squarlboy
30. Apr 2015 · 18:51 UTC
Very well done game design.
Ithildin
30. Apr 2015 · 21:34 UTC
The idea is brilliant, one of the best I've seen so far, and the visual style is fantastic as well.

My only gripe is a couple of bugs that I've experienced related to cards that get stuck somehow and can't be moved later. Also, the remaining players turns are way too fast, so at times you can lose track of the game sequencing.

Other than this, a really solid entry. (and funny! Have you considered adding some animal sound effects for a hypothetic post-compo version?)