Not Nice Knight by chromebookbob

[raw]
made by chromebookbob for LD32 (COMPO) 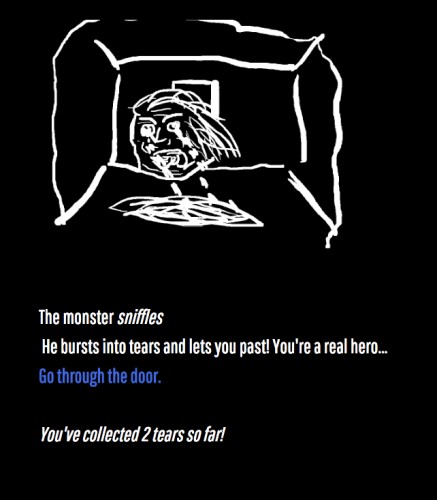 This is a text adventure with some animated characters.
You are a knight, you are in a dungeon without anything but a book containing biographies of all the monsters you will meet before you leave. Use your wit, and nastiness to make each one cry and you may see the light of day again.

I encountered a few challenges along the way, the first was that I missed about 8 hours of the jam because of school. I had to work with twine 2.0, which I have done before, but it is a fairly new piece of software so it isn’t amazingly documented. I would have liked to be able to change the background colour towards the end of the game but limitations in CSS meant I couldn’t. I also had some trouble animating my monsters in photoshop as I was live streaming and using a pen tablet which was rather taxing on my laptop. I also had some trouble with embedding the game (I lost formatting and fonts) so it's download only at the moment.

For the best experience, play the windows version, although running the html is fine too (and cross-platform).

The Unconventional Weapon is that you have to be mean!

For those who are looking for an *easy* way to restart, if you are in a browser (not in the windows version) you can simply refresh the page to restart.

My first Ludum Dare ever!

Also I really like the overall mood of the game.

Loved the writing, but would be nice if one wrong answer didn't result in an instant game over.
Red_Fan games
20. Apr 2015 · 21:04 UTC
Graphics fit in really well with the music and the gameplay is suprisingly fun
Phil Strahl
20. Apr 2015 · 21:11 UTC
Interesting take on the theme, and interesting choice of genre. The first thing I realized was that a 40 megs download is pretty steep for a flipping text adventure, so i guess it has to do with the standalone runtime cramming ALL THE LIBRARIES into itself. But i digress.
The game was a fun one and has an interesting morale. In fact, you as a player become the real monster and even redeem yourself, how nice! The graphics and music both fit the theme very much and I really enjoyed playing the game. And tears as currency/weapon? Loved it! Looking forward to the sequel :)
Jungle
20. Apr 2015 · 21:12 UTC
a very funny game. Simple graphs but still lovely. Gameplay is ok also. Congrats
Paulozz
20. Apr 2015 · 21:28 UTC
I love to be mean! This is very good.
Got some issue with the win version (no sound and missing graphics), but the html one works perfectly fine.
Headmade
20. Apr 2015 · 22:14 UTC
Haha so you made an insult simulator? Mee too :D
Your writing is alot better though, so good job.
Fabraz
21. Apr 2015 · 21:09 UTC
Pretty good twine project and fits the theme's challenge.
nightlord
21. Apr 2015 · 21:14 UTC
played until the prom queen with the twigs. here's what i liked:
- the music helped the mood
- the graphics are weird but they work
- the dialogue is funny
how this game could be even better imho:
- more still images less animation. the graphics are so abstract anyway i don't think animation helps here
- more roadblocks that don't kill you. so you could go from room to room for a few rooms and engage multiple monsters without necessarily getting eaten or getting past.
slowfrog
21. Apr 2015 · 21:14 UTC
A bit simple but kind of funny.
Druid
22. Apr 2015 · 08:59 UTC
Graphics are indeed interesting, but what i like most was story. I don't know why. I just like when someboty turns from bad to good :D
MFEP
22. Apr 2015 · 10:41 UTC
+ fun concept
+ well designed monster characters
- not really challenging
- no restart option in the end
nassi
24. Apr 2015 · 19:53 UTC
I think being a Quite Nice Knight fit me a lot better after all :). This ascends from a text adventure right into visual novel territory.