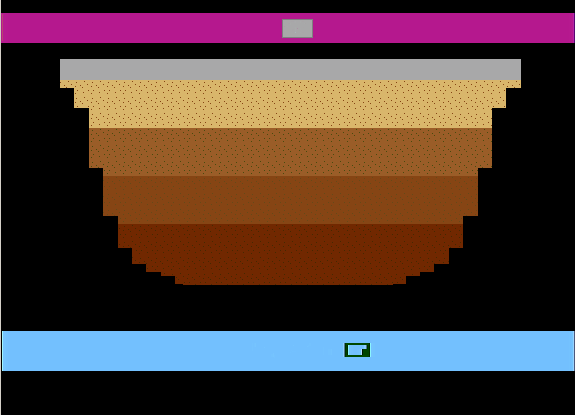 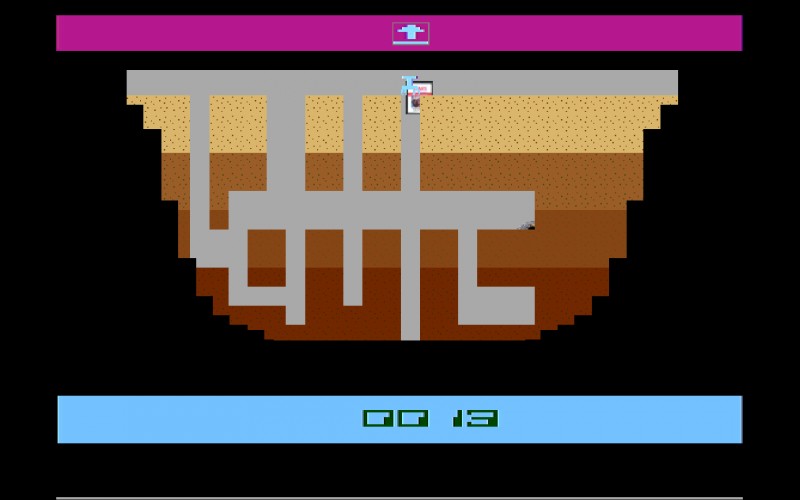 As always, I promise to play and honestly rate your game if you play and rate mine... just leave a comment so I'll know you did it!

This is a last minute entry... inspiration struck around 7pm Sunday. Lol.

In total, this game was built in about 10 hours. Don't judge too harshly.

There's not really intended to be any challenge here, this is just a little homage that I made to the Atari E.T. game and the dig that happened this weekend at the Alamogordo landfill.

This game commemorates the Dig at the Alamogordo, New Mexico land fill, where millions of E.T. cartridges lie buried, according to legend. Dig up a cartridge to prove that the legend is true.

Arrow keys move your digger. You can dig sideways and down, but not up, so to go back up you need to follow the tunnel you dug.

Press 'Z' to toggle between digging mode and picking mode. When you find something, switch to picking mode, and you can pick the find up. Move the Find out of the land fill pit to get points for the find.

Oh yeah, Esc quits the game, and 'R' will reset the level if you get stuck on a glitch.

Special note: The graphics are based on the infamous "pit" screen that was a prominent design feature in the original E.T. for Atari. These pits were a real pain in the ass, and many people complained about them, especially since there were no pits that anyone fell into in the E.T. movie.

All graphics in the game are colored using the Atari VCS NTSC color palette, with the exception of the digitized image of the E.T. cartridge, and the soda can, which are just very pixellated scaled down images that I got from google image search.

Sound effects created with bfxr. The victory music is the title screen music from the real E.T. game, sampled using Stella and Audacity.

The only enhancement in the enhanced versions is that when you pick up a Find, it gives you a bit of a clue what to do with it.

Jam final submitted 5:53 PM 4/28/2014:)
Managore
29. Apr 2014 · 02:03 UTC
Fantastic interpretation of the theme in light of recent events! I also liked the mechanic of switching between digging and picking up.
RyanNielson
29. Apr 2014 · 02:06 UTC
I really like the look of the game, nearly matches old Atari games perfectly. Would have been nice if you could have matched the aesthetic with the objects you pick up, but they may have made them hard to distinguish from one another.

I also expected to get points once I moved the items to the top of the screen, but I had to move them all the way to the right.

Great idea for a game though, especially with the recent finds of all the ET cartridges a few days back.
🎤 csanyk
29. Apr 2014 · 02:36 UTC
Thanks, Managore. I told you already but I don't mind saying in front of everyone here how great your game is. I really hope you medal in a few categories this time.

Thanks RyanNielson. I would have liked to be able to spend more time on the pickup items sprites to make them more like atari graphics, but for lack of time I settled for shrinking down images until they became very pixellated and tiny. If I had to do it over with more time I would have liked to do those more properly. Your comment just confirms that my hunch is correct.

You can actually take items out of the pit on the left OR right, and I had thought about putting some kind of visual indicator there, and almost did so about an hour before deadline. I have added a post-deadline enhanced version with this feature, because I do think that it makes for a clearer goal.
Garris
29. Apr 2014 · 03:44 UTC
Oh man, so many points for that E.T. The functionality and use of theme are very impressive considering how quickly you put this together. I did find the "move all the way to the right to win" mechanic a little difficult to grasp though. Was that an E.T. game reference? (I haven't actually played the worst video game ever made)
Sodaware
29. Apr 2014 · 11:09 UTC
I have a soft spot for old Atari games, and this captures the aesthetic almost perfectly. As RyanNeilson said, it would have been nice for the buried items to match the graphical style, but it's understandable why not given the time/resolution limitations.

NoTrueSpaceman: Yeah, maybe a timed mode would have given it some semblance of game-ness. A lot of Atari games had a no-challenge mode, often indicated with a teddy bear icon, intended for very young children. In retrospect I think this "game" if it can really be called that should have had the teddy bear.
mark.goetz
07. May 2014 · 04:18 UTC
I like this - very timely! The sense of humor is definitely showing through. I don't know if it was intentional to only show 4 digits, so that you roll over if you get the ET cartridge and then get anything else, though. In any case, nice job putting together a great callback in such a short time!
scgrn
07. May 2014 · 05:15 UTC
This game is 100x better than E.T., and it gave me a good laugh remembering how bad E.T. actually was. Well done.
01101101
08. May 2014 · 08:13 UTC
I didn't play the Enhanced version so my comment is about the Jam one.
It feels like something's missing, maybe a timer of some sort? That said, it's more relaxed like it is. Doesn't feel like it's complete but the last minute thing explains it :)
You sure did put some thought into it: the reference, the palette, the music... It contributes to the mood a lot.
praporomsk
08. May 2014 · 08:44 UTC
Considering that the whole game is a joke, it still better than E.T.
🎤 csanyk
08. May 2014 · 14:21 UTC
mark.goetz: The score being only 4 digits is somewhat intentional, in that it emulates the E.T. videogame. The way the scoring works is not very well thought out. I wanted finding the E.T. cartridge to give you max score and end the game, but I forgot to code the actual ending, so when you "win" you can keep playing and retrieve other stuff from the landfill. Originally the intent was to max your score to 9999 for retrieving the cartridge, so the cartridge isn't actually worth a set amount of points, but rather it sets your score to 9999 regardless of what it was. But if you left other things in the pit and extract them after, you can extract them and get more points, which rolls the score over back to 0000. We might consider this an exceptionally authentic defect, emblematic of the shovelware produced for the VCS which led to the crash of '83. ;-)

01101101: Adding a timer to the game to provide a level of challenge would be an improvement... I think someone else suggested that, and it's not a bad idea. Truthfully as I was making this I didn't have a thought in my head as to how to gameify it. I just wanted to re-create the E.T. pit and throw garbage and dirt in the hole, and a means to dig stuff out of it. That's all I had time for! Although it's hardly a game, it's deliberately bad, and I'm pleased with how quickly and easily I was able to build what's here.
kirbytails7
10. May 2014 · 06:18 UTC
I'm really digging this game.
pjchardt
10. May 2014 · 06:24 UTC
Collected myself a few tires and an ET cartridge. I played the first time before reading your instructions and thought that I was digging in the ET landfill :)
mortus
10. May 2014 · 07:05 UTC
I'm sure you already know it's pretty basic, but I love the idea and the execution is solid, so, great work for a small time you've spent on it! At first I didn't know how to get points for my findings though, I think it would be better to score points as soon as you bring something to the top instead of moving it to the side of the screen.

I also noticed that you didn't realize that you can choose the current building tool in my game in 1 player mode by pressing PgDown (remappable) which made 1 player mode incomplete for you, so if you want to take another look on the game - please be my guest.
HybridMind
10. May 2014 · 20:53 UTC
I found the ET cartridge but it didn't give me any points.
🎤 csanyk
12. May 2014 · 05:00 UTC
HybridMind: To remove a Find from the landfill, you have to take it all the way up and out of the pit. Take it to the left or right edge once you get to the top, and it should give you points.
smbe19
15. May 2014 · 14:54 UTC
There are little things in the execution that could have been improved the impression (not actually bugs, but things like the fact that it depends on where you dig how wide the tunnel gets), but interesting idea.