[raw]
made by SimianLogic for LD28 (COMPO) 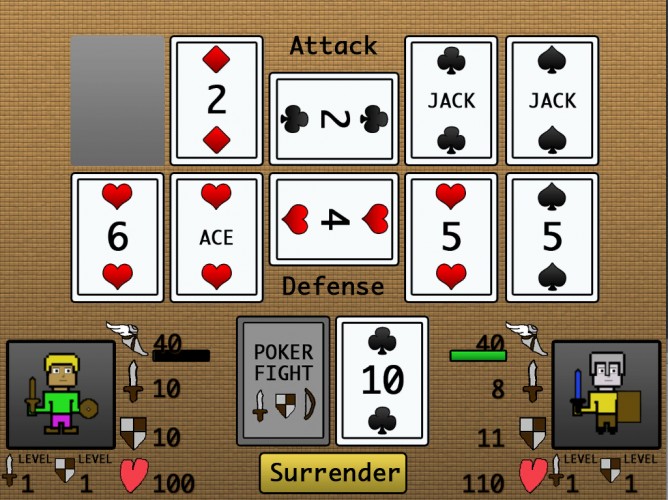 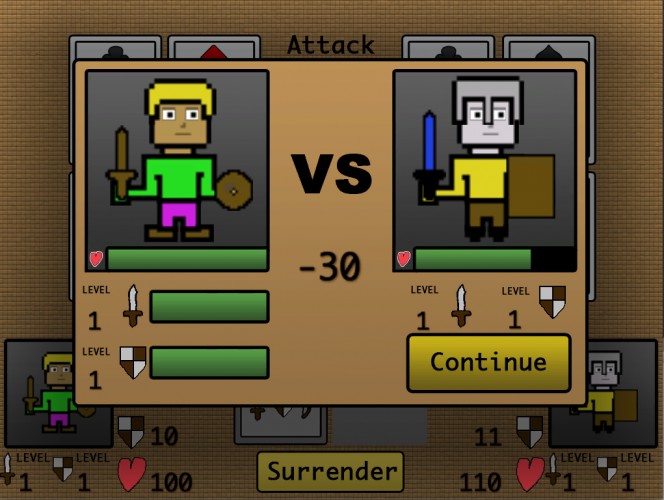 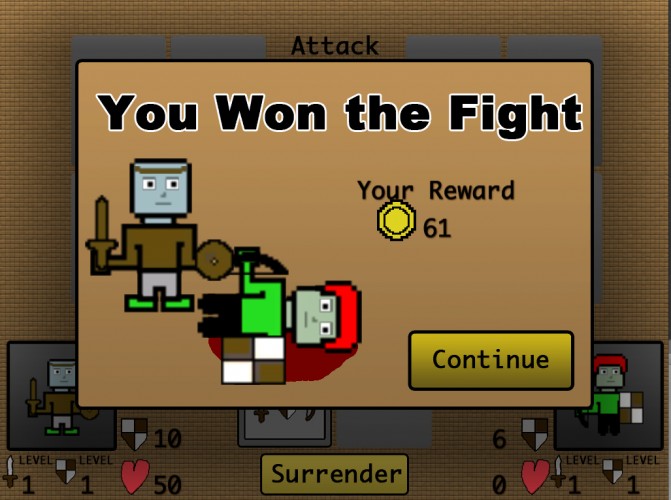 Enter the Poker Fight Dueling Arena, but be careful! You only get ONE life. At the start of each battle, you are dealt ONE card for attack and ONE card for defense. As more cards are drawn, you decide which hand they go towards... once you make two full hands you change your attack stance and defense stance.

The better the hand, the more devastating the stance (both on attack and defense).

Kill as many enemies as you can.

Poker Fight is built in Unity with Futile. I'd read about it, but never used it before Friday. I chose something somewhat
simple (a card game), but even that turned out to be too much for new tech. It's basically a version of Solitaire but with some
RPG elements thrown on.

Each hand is given a Defense multiplier and an Offense multiplier. Your attack damage is (YOUR ATTACK STANCE) * (ENEMY DEFENSE STANCE) * (YOUR DAMAGE). Since I didn't get level-ups and equipment working, you're stuck with a wooden sword at 10 damage and a wooden shield that gives you 100 health. Enemies are random.

Managed to beat the first guy! (On my second playthrough. At first I didn't realise what was the attack panel and defense, but then I reread on the start menu).

Pretty fun. I like card games because they're bound to be fun. Like, you can't not understand how to play if you understand poker, so it's enjoyable.

Nice one.
lennaert
19. Dec 2013 · 00:44 UTC
Like the idea, I could only ask for a more streamlined approach. With few eye catching events on screen, things need to happen faster. Maybe add some strategic elements, unless your intent was to keep it purely chance like actual poker.
🎤 SimianLogic
19. Dec 2013 · 01:49 UTC
@f7f5 -- it's a unity project. maybe try the web version? I don't actually have a linux box, so just blindly exporting from Unity. not sure if there are any special tricks to get it working

@Alex -- if you lost on that hand, it was the enemy attacking you (his attack vs your defense). the game really really needs some interface space carved out to show both players' current stances. (also there may be a bug. i feel like this has happened to me, too,)

@lennaert -- i've been doing mostly mobile dev, so i think it plays better on a touchscreen (dragging is less cumbersome). for playing on PC (like the submission), I should've added a thing so you could just click on an empty slot and place the card there without having to do mouse drags
KunoNoOni
19. Dec 2013 · 03:06 UTC
What a clever concept and a cool way to combine an arena style game with poker! Too bad there wasn't any sound.
MrTedders
19. Dec 2013 · 04:00 UTC
Interesting mechanics you have goin here, good work! Try for a more active backdrop, meaning something more pleasing to the eye or some sort of background effects.
insane66
19. Dec 2013 · 04:03 UTC
I like it, it works well. Neat twist on turn based fighting with poker. It definitely has that mobile feel (or could be mobile) Nice entry!
Ras Lyon
19. Dec 2013 · 12:39 UTC
Neato! Lot's of potential there. I wish I could have full hit points between battles. I had a hard time understanding the Attach/Defense screen at first, and I wish I could most cards after setting them down (even if you can't switch them between Attack / Defense) still, very novel and cool. Would be excellent multiplayer!
juaxix
19. Dec 2013 · 14:12 UTC
i surrender to this amount of job, well done bud
Benjamin
20. Dec 2013 · 12:21 UTC
This game has great potential.

If you dont have time to include all your features, just remove all the uncessary stuff when you make your compo release.
By still having an atk & def level, this weird speed skill and money between games you give the feeling of a very complicated gameplay. But in his current state, your game is very simple, it should be seen as an intuive game.

If you implement your atk&def skill I would rather make the damage system go this way.
- The bigger hand succeed in applying the full damage or diminish atk by def lvl in case of defense. So an Ace Pair still win on a Queen Pair for example.
- If you have a good set ( Full house, Flush, etc ) You launch some special move( 2x, 3x damage for atk, extra turn for def etc ) with kickass FX of course :)

I have NO IDEA how you plan to implement initiative on this game and would be curious to hear more about it :D

Also, It's really easy to make gound sound environment for this kind of game. You should try Bfxr or labchirp to add sound for : card moves - damage - defense - button clic.You can add a lot to the mood of your game with only 4x sfx.
🎤 SimianLogic
20. Dec 2013 · 21:23 UTC
@Benjamin -- think I follow your attack logic. i have another poker/combat design somewhere sketched out that is more squad-based (like Puzzle & Dragons or Marvel Puzzle Quest) where each character in your party "fires" on different hand combos. Having your attack damage be your attack level minus their defense level wouldn't work as well with this design, because the intention was to keep the randomly generated enemies at roughly the same attack/def. level as the player. That could certainly be redesigned, but as it stand you'd end up with all fights being essentially the same.

Re: Bfxr/labchirp. definitely need to spend a weekend or two familiarizing myself with what's out there. For my non-LD games, I just usually just buy sound effects from Sound Rangers or another site.

Statwise, there are 3 stats for any piece of gear: attack, defense, and initiative.
Attack does what you'd think (sets your base attack value)
Defense is a bit mislabeled, as it's really how much health you have (didn't want to get into the complexity of balancing ATK vs DEF)

Initiative is a bit complicated. When your initiative bar fills up it's your turn to play a hand. The fill rate is tuned to basically be 1 second if your initiative were 100. So if your initiative is 50, you go every 2 seconds. If it's 25, once every 4 seconds. The players right now are hard-coded at 40, which is once every 2.5 seconds. The idea was to have some weapons trade off attack rate for rate of fire. A bow might deal only 4 base damage but get to go every second instead of every 2.5 seconds.
notajetski
24. Dec 2013 · 23:05 UTC
great concept!
larb
28. Dec 2013 · 17:47 UTC
Really cool idea. I would love to see the missing features you mentioned. Great entry.
Xanjos
28. Dec 2013 · 17:57 UTC
Could do with some sort of battle music but I really enjoyed the concept.
BluShine
30. Dec 2013 · 08:44 UTC
Nice idea, and the gameplay was pretty interesting once I started to understand the strategy. It seemed a lot more complex than it actually was, with all the stats and stuff that didn't really seem to do anything. But really, the core mechanic was solid, all the issues I had were simply a lack of polish. I could see this game being really awesome with some cool art, battle animations, and sounds. The 48-hour compo version is fun, but I'd love to see a full post-compo version.
PEBKAC
30. Dec 2013 · 12:48 UTC
Nice one. Mechanic works OK.
Tex Killer
31. Dec 2013 · 02:16 UTC
Interesting game, but could use some polishing... For example, the player life points could be restored between fights, and there could be a better explanation about the mechanic... I almost died before I understood it.