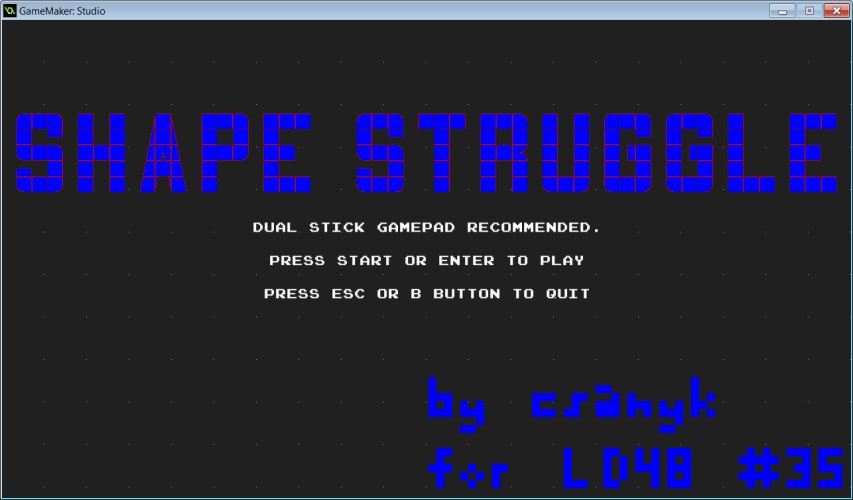 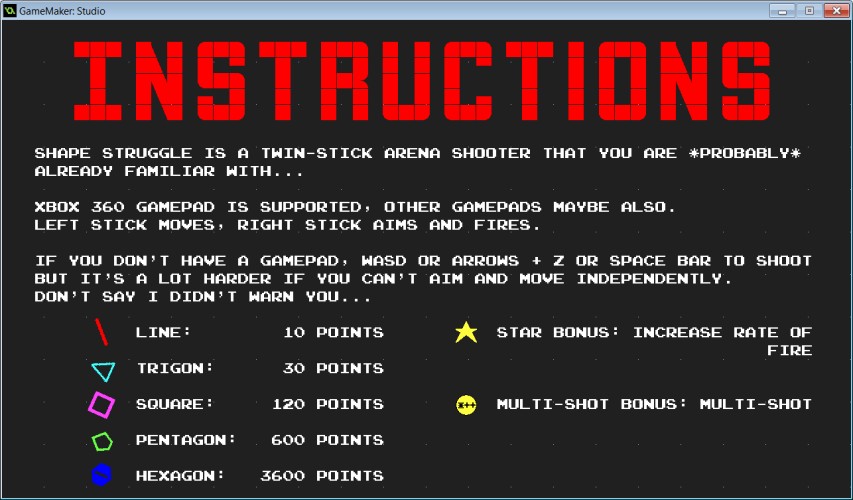 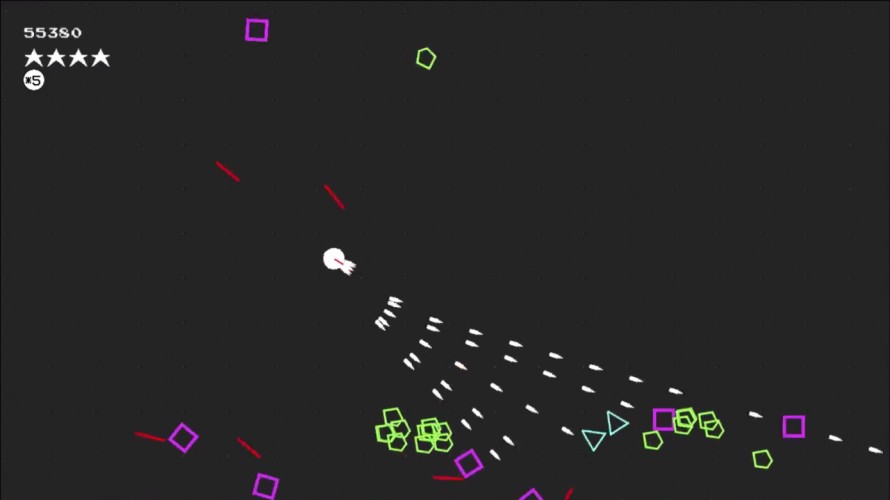 Shape Struggle is a twin-stick arena shooter that you are *probably* already familiar with...

If you don't have a gamepad, WASD or Arrows + Z or Space Bar to shoot
But it's a lot harder if you can't aim and move independently.
Don't say I didn't warn you...

The more sides a shape has, the more power it has. When you shoot a shape, it loses a side and shifts into the next shape, and so on, until it's nothing but a line.

This is a really addicting game! Super fun when you get 4 stars and just mowing down polygons!

I think you might be right about the zoom, too. I may give that a tweak, too.

Glad you enjoyed playing my game:)
hippy dave
18. Apr 2016 · 21:46 UTC
Sadly my gamepad didn't work with it, but still fun!
CasualCat
19. Apr 2016 · 21:57 UTC
I think the most entertaining part of the game was getting the power up that increased how many projectiles you shot at once. The graphics were simple but were still clean. The controls were responsive but I think the rotation speed could increase a little but. And maybe zoom the camera out a bit. But the game was pretty fun!
MandolinQuinn
21. Apr 2016 · 03:29 UTC
Very solid entry. The moving parts work well and create a very cohesive whole which is greater than the sum of its parts. The ramping difficulty felt challenging, but not unfair, the art direction was simple and universal, the power-up created great feeling of progression without making the player unbeatable.

The sound design needs work as I sure you're aware of, and some better visceral feedback would make this game shine.
ployer
26. Apr 2016 · 03:40 UTC
xbox controller didnt work for the HTML5 version. used keyboard instead. nice entry
🎤 csanyk
26. Apr 2016 · 05:16 UTC
@ployer the gamepad should work in latest Firefox and Chrome, but not IE. But if not try downloading the Windows build if you can run it.
Gamepopper
26. Apr 2016 · 12:43 UTC
If you haven't already, maybe you shouldn't have the title logo and other text rapidly flash multiple colours, it's seizure educing. At least slow it down or use colours that blend well with each other.

Aside from that, I like the progressively harder enemies, the amount of bullets increasing and even the player movement.
uheartbeast
26. Apr 2016 · 14:37 UTC
It is cool how you discover more about the game the more powerups you get. Well done. Sounds were great, visuals were simple but nice. It's a great arcade-feel game.
🎤 csanyk
26. Apr 2016 · 18:26 UTC
@uheartbeast thanks! Actually, the difficulty progression is based on the number of kills, but the number of kills ramps up quickly when you get a few power-ups, so they two are more or less indirectly related. I think the challenge curve in the post-compo is even better. I plan to add a few more enhancements once I get some framerate issues sorted out.
managore
27. Apr 2016 · 05:03 UTC
It makes me so happy to see a twin stick shooter with permanent upgrades! I love becoming an absolute powerhouse and mowing down hundreds and thousands of shapes. I also really liked that the enemies spawn both in large groups, as well as spread out singletons, since it meant I couldn't run circles around the group and keep them contained. It would have been nice if the view area was larger, or if the player remained more centered, so that the player didn't need to lead to camera as much.

In both of my runs I ended up dying to a line, sadly, but with a score of roughly 350,000 and then 450,000.
icefallgames
27. Apr 2016 · 05:52 UTC
Well that gets intense quickly! It's simple, but there's something incredibly satisfying about unleashing a torrent of bullets on tons of enemies.

I had no performance issues, and the Xbox 360 controller worked fine for me (I used the html5 version). Nice job!
🎤 csanyk
27. Apr 2016 · 13:56 UTC
@managore: Thanks for the feedback! I do think the camera probably needs some tweaking, still. I'm just using view object follow right now, which isn't very sophisticated. I know it's possible to do more in code. I tightened up the margins somewhat in the post-compo, and zoomed out to 75%, but I still feel like the player needs more room to see in front of them. Now that I have the framerate issues under control, I'll see what I can do about this. I have some ideas...

The speed of the player is a little high, but not a problem at all. The only con is that the mouse cursor is hidden here (html5 on chromium, tested on linux and os/x), so it was a little difficult to know where I was shooting.

Continue improving this game! See ya ;)
🎤 csanyk
30. Apr 2016 · 03:48 UTC
@deadbodyoutline, yeah, there's no mouse cursor visible... I really intended for the game to be played via the gamepad, but included keyboard/mouse controls knowing that many people potentially wouldn't bother to plug in a gamepad just to play my game for a few minutes. I wanted to give them a bit of the flavor of playing the game, but it's much better to play with a dual analog stick controller. Give it another try and see how you like it with the intended controls!
Alphish
02. May 2016 · 20:34 UTC
Got nearly 150k worth of score. That started really slow, and initially I thought first there is no gameplay at all, and then there are only line-like enemies and no variety. Then upgrades and triangles happened, and things were looking a bit more interesting, though the game still becomes rather boring after a while. There were shapes that move (shift) around, but I think it's a rather weak use of theme. ^^'

Oh, also, I think some sort of crosshair or other mouse indicator would be really helpful. The mouse cursor didn't display for me, so I had a little trouble aiming. Plus, the arena borders could use different graphics than flashy rainbowy epileptic lines. ^^'

It was fun to play around with my super-powered gatling gun for a bit, even if it's not really the greatest entry around (those are rather few and far between, anyway). ^^'
Ninjanick107
03. May 2016 · 02:45 UTC
I really like the weapon progression
🎤 csanyk
03. May 2016 · 03:25 UTC
@Alphish, the shapes don't just move around, when you hit a shape it turns into a lesser-sided shape. I probably need a morph animation to convey that better. Thanks for your feedback! Very thoughtful.
CarlsonAndPeeters
03. May 2016 · 05:18 UTC
This is awesome! Love the build of power and the increasing chaos of the bullets and enemies. Clever use of theme too.

Only real complaint is the SFX. Super grating when so many enemies are dying at once.
tomlum
03. May 2016 · 06:22 UTC
All the makings of a good arcade shoot em up. Nothing quite like the satisfaction of getting that next best upgrade.

(also as a p.s. I saw you got stuck in my game at hacking the mainframe for entering a password- at that point you simply enter in a whole bunch of characters and it will let automatically let you in, it's meant to be a joke haha)
🎤 csanyk
03. May 2016 · 10:04 UTC
@CarlsonAndPeters: it's an undocumented feature, but you can mute audio by pressing the M key. I've been working on some new sfx but haven't included them in a new build just yet. Thanks for playing!
CtrlAltTea
03. May 2016 · 20:44 UTC
Nice game, pretty hard with keyboard controls
spaghetti_pants
04. May 2016 · 02:37 UTC
I liked this game. It was simple, but nicely made and good. Reminds me a lot of Geometry Wars. Good job.
knason
04. May 2016 · 17:48 UTC
yay, real fun. I especially like the difficulty curve and the use of powerups, nice simple graphics. Well done! Congrats on your entry.
NightShadow0
05. May 2016 · 00:12 UTC
You might want to add an epilepsy warning, those flashes are intense.

Solid entry, gets repetitive a little quick, having the screen always so full doesn't really allow the game to show off the different enemy behaviors.
Mordokay
05. May 2016 · 11:27 UTC
Got to 6570 on my first try!... Realy solid game ... was realy impressed with how fast the game recognized my 360 controller .... Gameplay is realy fun and game gets harder at a nice time. +1
squirrelbot
05. May 2016 · 12:47 UTC
Works fine with a Logitech controller, I got a 38850! It's a lot of fun to play, especially once you're shooting four bullets at triple speed.
curtamyth
05. May 2016 · 23:13 UTC
This is fun! It felt very satisfying to upgrade my shape and blast through everything around me. Only thing I didn't really like was the sounds, they were a little bit annoying after a while.
🎤 csanyk
09. May 2016 · 15:24 UTC
Thanks to everyone who played my game! I appreciate all your feedback. See you at LD36!
MayankUnreal
09. May 2016 · 16:47 UTC
Its really fun to play this ammo and enemies game.Really cool game
GaryS
09. May 2016 · 21:56 UTC
Very enjoyable, rather frantic! I was playing with keyboard and mouse, which seemed to work pretty well - though my scores were much lower than some mentioned here.
I think the difficulty curve could be a bit more friendly, it seems you can be overwhelmed with enemies pretty quickly, but still it's a lot of fun to play.
Xanjos
09. May 2016 · 22:01 UTC
Tested this on my keyboard/mouse since I didn't have my gamepad on me but I had no problems playing. Apart from the odd slowdown (probably from all those bullets being instantiated), this was pretty fun to play and I really like how the enemy shapes break into smaller parts Asteroids style.
Divitos
09. May 2016 · 22:03 UTC
I can't comment on how the controls feel when using a controller (which I'm sure is what it was mainly designed for), but the keyboard controls feel a bit off. I think the biggest problem was the slow turning in comparison to the fast movement rate and pace of the game. The gameplay itself though is really fun. I found myself playing this one for a good bit longer than I'd play other arcade style games.