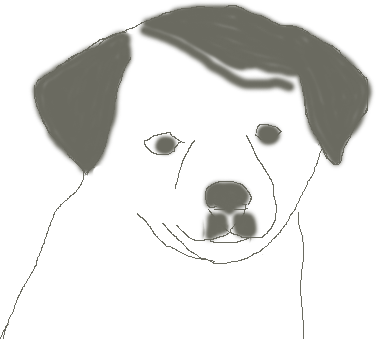 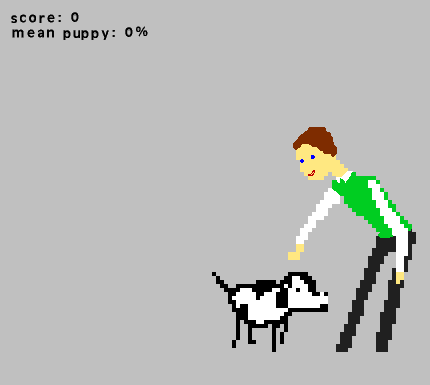 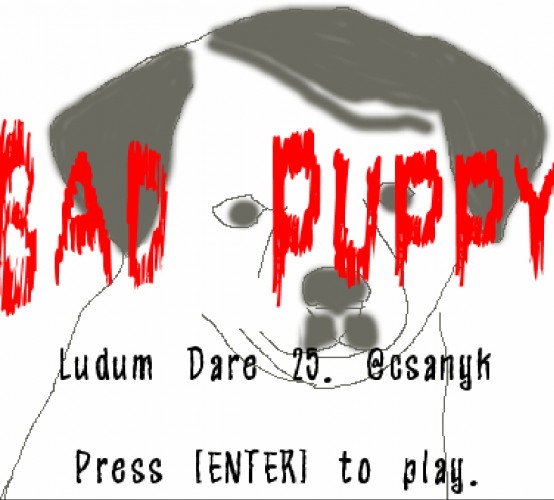 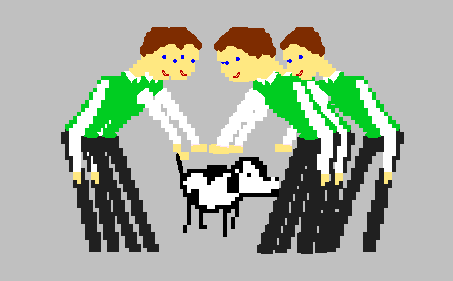 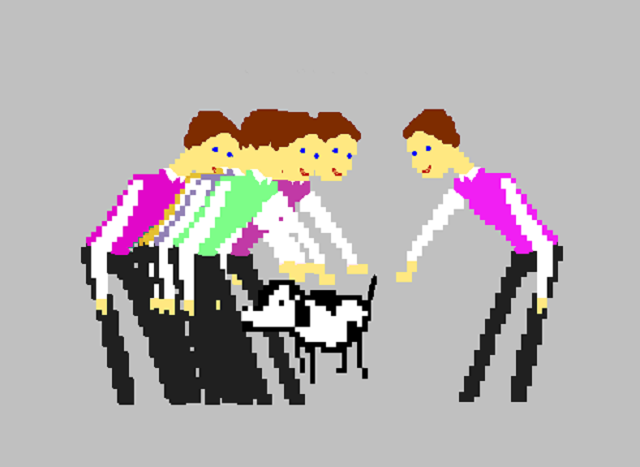 You are a bad puppy. Being that you are a puppy, all you can manage to do is bark at people. So, bark at them. Bark, bark, bark! The more you bark at people, the more points you get. Get all the points! But if people pet you, you can't be mean. Don't let them pet you! Bark! Bark, Bad Puppy!

You get points if you bark at the people. You lose meanness if a person pets you.

This game was originally conceptualized as "Puppy Hitler". Puppy Hitler is canceled. Here's why:

1. Bonus pickup system
2. You can press Esc to exit game at any time.
3. Multi-colored sweaters.
4. Some added variety to the barking.
5. Female persons.
6. Person skin color now has variety.

When you're getting petted, you can just run away. If you get petted too much and start wagging, the game is over.
h.attila
17. Dec 2012 · 06:23 UTC
I liked your original idea better, but I understand why you dropped it.
The game is still funny though and your interpretation of the theme is definitely unique.
I think some backgrounds and goofy music would've greatly improved the game.
🎤 csanyk
17. Dec 2012 · 06:35 UTC
Thanks, h.attila. I hope someday to not suck at music. I tried making some but it just didn't come together, and rather that put something in that didn't fit the game, I decided to omit it.
peggiosoft
17. Dec 2012 · 09:42 UTC
is it compatible with kinect?
Neonlare
17. Dec 2012 · 13:07 UTC
Wasn't quite sure what the gameplay mechanics of this was supposed to be, and trying to close the game crashed my entire system. Seemed pretty funny though~
🎤 csanyk
17. Dec 2012 · 13:12 UTC
peggiosoft: no kinect support.

Neonlare: You have to be facing a person and close enough for a Bark to register on your score. If a person gets too close, they will try to pet you; if you get petted too much, you stop being a villainous puppy and the game ends.

- You should've added in the game itself to press Z to bark, first time I was confused as what to do.
- Some alternative actions ;) would've been nice.
- It's a bit too simple in my opinion, but I see what you're trying to do :P
- Quitting and restarting aren't obvious.
🎤 csanyk
17. Dec 2012 · 16:06 UTC
Gemberkoekje: That's a good suggestion about in-game instructions. I can add a message to tell the user how to play. It's explained in the Instructions screen, but I guess people might not go there or feel like reading.

I like the simplicity! I would consider adding more actions to the game if it improved the game. I did add bonus pickups to the post-compo edition, which I think helped make the game a little more interesting. I'm sure there are probably other things I could do as well.
Manest
17. Dec 2012 · 16:10 UTC
hard for the system. Windows was near to crash

Needs more to the game, but was definitely entertaining!
pikmin4000
18. Dec 2012 · 01:38 UTC
Wow this is one of those games, with just a little more polish, it would turn into something great. The gameplay was real addicting.
Dmitrix
18. Dec 2012 · 02:28 UTC
The game mechanic is interesting. I think the art could use some work though.
derdragon
18. Dec 2012 · 02:51 UTC
I would probably do a lot better at these things if I could think up concepts as simple yet rewarding as this.

Dmitrix: Thanks:) I struggled a lot with doing a walk animation for the first time on this game, and ran out of time to do better art.

Of course I wish there were more actions: how about biting? And I wished the percentage of naughtiness increased if you don't get petted for a sufficient amount of time.

I'm also sad that you had to censor the game for your friend. Back then I saw the name of your entry and thought "Yessss! Someone dares to do it." (Couldn't do it either because my teammates opposed to it..)

Anyway, good one, keep going! See you next LD :)
mokujin
19. Dec 2012 · 18:33 UTC
People animations is so funny xD
shaneshanekavanagh
19. Dec 2012 · 18:41 UTC
Ha ha! I couldn't exit it, and I nearly shouted bad puppy! Great craic, cheers!
Maple
19. Dec 2012 · 20:52 UTC
Hahaha. I hoped this would be good, after your dramatic reading of the title, and the humour held up. A rather short experience, but damn. I could barely be much of a bad puppy. Also I had to laugh when some guys were patting me and I was facing the other way, and it just looked like they were shaking their hand at my tail, lol.
azurenimbus
20. Dec 2012 · 02:01 UTC
Gotta say, I fell in love with this game. Such an original idea. Incredibly simple, but very engaging. One of the ones I liked the most so far.

Bad:
-Lacks just a little bit of polish to put it over the top.
-The idea that you have to face someone to bark at them isn't quite clear.