[raw]
made by KevinWorkman for LD23 (JAM) 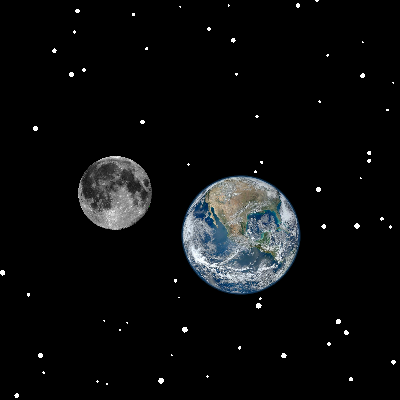 Sit back, relax, click the mouse every once in a while, and mostly just listen to Carl Sagan talk, and reflect on how insignificant we are.

I'm entering this in the jam because I didn't create the images (NASA helped) or the sounds (Carl Sagan helped).

I really like the sense of humor here. And I'm a sucker for the fact that your different celestial categories had names of real items that you drew attention to. Pleiades! M31! Awesome!
Kvisle
24. Apr 2012 · 00:30 CEST
The DNS-entry for the webserver I'm downloading this from is wrong;

It shouldn't have http:// in it. That's probably why webstart / applet loading fails. Downloading directly from AWS works.

Adding the following line in my hosts-file:

Fixes a lot of problems with that website in chrome. This probably affects other people too - you should check that out.

My original intent was to overload it with real pictures from NASA and to make it slightly scientifically accurate, but I had to settle for just giving the names of things you run into.

I wanted it to be casual, mostly just listening to Carl Sagan and looking at pretty pictures, so I probably should have made the controls less sensitive. So if you're having trouble with the controls, try clicking closer to the Earth- the closer the cursor is to the Earth, the less of an effect clicking has on your movement speed. Slower is better for this game.

The game's a bit frustrating because of how little you can see, but that's also the main gameplay hook. The sounds are kinda rough and I feel like I started ping ponging between different celestial bodies a little too easily sometimes. I think that having the "character" move around rather the scene rather than stay centered in the view the whole time would make things easier.
angrygeometry
24. Apr 2012 · 04:06 CEST
great stuff. i eventually gave up after bumping into too many wandering M53s but i enjoyed it until then!
zzzev
24. Apr 2012 · 06:41 CEST
At first I just played the game, and found it a little frustrating, but after reading the author's advice it was a much more enjoyable experience, as a sort of galactic sightseeing/slow motion katamari. And, of course, Carl Sagan.
bburbank
24. Apr 2012 · 18:04 CEST
HAIL SAGAN
ChrisWhitman
25. Apr 2012 · 02:47 CEST
I won! I'm not going to lie. I could listen to Sagan talk for hours. I had some graphical and sound issues (screen kept flickering and some of the sound levels were really low while others were really high). Fun, though, and totally worked as advertised!
MadGnomeGamer
25. Apr 2012 · 03:59 CEST
I won! Awesome game! A very cool but simple implementation. The mechanic itself is kinda repetitive but the graphics, general idea, and audio make it quite compelling.
doowttam
25. Apr 2012 · 05:16 CEST
Pretty fun. The crashing sound effect kept it from being soothing for me, but other than that I really enjoyed the experience.
jrasmussen24
25. Apr 2012 · 06:30 CEST
I love the inclusion of Carl Sagan-- provided a hilarious juxtaposition to the bashing of celestial bodies.
Liliaze
25. Apr 2012 · 13:43 CEST
The sound is very well done and puts us in the mood. I like the principle that matches the theme. However, the game length is too short, no challenge. With the score would be perfect.
KunoNoOni
26. Apr 2012 · 00:28 CEST
LOL! What an AWESOME game!
Milo
26. Apr 2012 · 00:44 CEST
This is a cool thing to do while listening to Carl Sagan.
firstrowgames
26. Apr 2012 · 02:55 CEST
Fun and relaxing game with a Katamari concept.
I enjoyed the game, good work!
🎤 KevinWorkman
26. Apr 2012 · 06:11 CEST
Thanks so much for the kind words, guys. To be honest I wasn't very pleased with the result at first, but I'm glad that at least part of my goal was accomplished!

To further explain where my head was at when creating the game, part of the "goal" of the game isn't to finish it as fast as possible, but to just sit and listen and think about what Carl Sagan is saying, maybe look at the pretty pictures. I imagined the player spending the first minute or so just watching the earth drift slowly through space, listening to the beginning of a pale blue dot. Then maybe a large object would appear that would cause the player to avoid it, then a small one appears.. but instead of just crashing into it, the player could try to get it to orbit earth or something.

I know that slower games aren't very easy to portray in contests like these where we're trying to play as many games as possible, and I know the control sensitivity and top speed should have been toned down a little to encourage a slower, more "casual" experience. Lessons learned! But perhaps it's better to leave both in there- casual players are more than welcome to dive into the atmosphere by clicking closer to the earth (which results in smaller changes to the speed), and players who really care about winning can still do that as well?


ExitException[ 3]java.io.FileNotFoundException: JNLP file error: http://s3.staticvoidgames.com/games/PaleBlueDot/applet.jnlp. Please make sure the file exists and check if "codebase" and "href" in the JNLP file are correct.
at sun.plugin2.applet.JNLP2Manager.loadJarFiles(Unknown Source)
at sun.plugin2.applet.Plugin2Manager$AppletExecutionRunnable.run(Unknown Source)
at java.lang.Thread.run(Thread.java:722)

Indeed it would appear that the "s3.staticvoidgames.com" domain itself cannot be resolved. A DNS query for the domain confirms what @Kvisle mentioned earlier, that the DNS entry for the domain is wrong. It should indeed NOT contain the "http://" part. The "http://" part is just a protocol specifier and has no place at all in the DNS entry. I recommend that you look into that.
Skywilly
05. May 2012 · 00:51 CEST
Marvelous. I love this game !
🎤 KevinWorkman
05. May 2012 · 02:09 CEST
Okay, I updated the applet and webstart jnlp files to take your advice. I'd love to hear from some linux people about whether or not that fixed it, as I have no way to test that. Thanks for taking the time to let me know what's up.
Jiddo
05. May 2012 · 11:32 CEST
Hum, I'm not sure about what you changed, but I've tried querying several DNS servers for your domain, and it still seems to have the "http://" part in the DNS entry. It could just be a caching issue tho, so I'll could try again a little later, but I doubt that waiting will solve the problem. Here is the current result of a DNS query:
http://pastebin.com/n1wuC8z8

Additionally, I can now not load your main website at all. (The website itself worked fine yesterday.) I get the following response:
HTTP/1.1 503 Service Unavailable: Back-end server is at capacity

If you want you are free to contact me by email at: jiddo.lua [at] gmail.com for further debugging of this issue.
Jiddo
05. May 2012 · 17:14 CEST
The DNS issues are all fixed now, so the game works perfectly on Linux as well (and probably on other platforms if anyone else had any problems before).

I really like the idea and the game mechanics. It feels sort of like a more personal take on Solar 2. I wouldn't mind some keyboard controls tho. I keep accidentally clicking outside the screen making the window end up behind something whenever I panic and try to steer away from something at high speeds. It would also be nice if you could zoom out, at least when at high speeds so that you can see stuff coming and react to them before it is too late.

The voice in the background was a very nice touch as well. Great work!
🎤 KevinWorkman
05. May 2012 · 17:22 CEST
Awesome. Thanks again for taking the time to explain the issue to me!
ratboy2713
06. May 2012 · 05:36 CEST
I would have given the audio a five, but the collision sound effect just ruined the mood.
Scott Baker
06. May 2012 · 08:00 CEST
As soon as I saw "Pale Blue Dot" and Carl Sagan, I immediately knew you hit the theme perfectly. I was so glad to hear Pale Blue Dot again.
spiral
07. May 2012 · 10:11 CEST
Potential here! I'd like to have a larger field of view and higher momentum on the earth perhaps.
madflame991
11. May 2012 · 21:49 CEST
Really cheesy - I like it! Twas a quite nice way to learn of new space objects
azurenimbus
12. May 2012 · 02:40 CEST
This has to be the best game over screen in the history of video games.
nornagon
12. May 2012 · 07:09 CEST
Love listening to Sagan, but the controls weren't very good :( half the time the planet didn't move towards my mouse, but away from it instead.
machinas
13. May 2012 · 00:10 CEST
heh. sagansploitation! not too shabby. i clicked through the victory screen! oh no! i wish the screen was zoomed back just a touch. or maybe zoomed out as you grow. background changes with your scale would be nice too.
Pitoum
13. May 2012 · 14:11 CEST
Nice game ! Like the gameplay event if the tiny screen make difficult to really anticipate bigger "stuffs". A widescreen version would be perfection.
Oye Beto
13. May 2012 · 19:41 CEST
I won :)
Playing a simple game while listening to the Carl Sagan's speech was interesting. It was wise to use the narration because if the game didn't have it, it might be a little boring.

The sound effects are too loud compared to the narration volume.
AirRider3
13. May 2012 · 20:56 CEST
LOOOOOOOL

I laughed my ass off (literally) after the first two seconds of the game, when I had already taken down Venus and Mercury. I wasn't expecting what the game was really about. Thumbs up!! (For my, you'd be the winner of the 'fun' category ;D)

Oh, and great narrator :P
Raptor85
13. May 2012 · 21:38 CEST
I have java installed and updated (All other java games play fine) but both of your links when I attempt to play the game try to take me to java.com to download an installer, a downloadable version would be nice, it looks interesting but not much I can do as you're site won't let me play it :/
Make A Game
14. May 2012 · 01:21 CEST
Oh man, we we're going to make something similar to this. I really enjoyed it but a bigger viewport would be appreciated. I could barely see what was coming from the sides. Loved the names poping up when hitting the objects, but the Carl Sagan speech just made the game way more hilarious than I was expecting.
chambers
14. May 2012 · 02:38 CEST
It took me a while to figure out how the controls worked, but it was fun nonetheless =P

I loved the idea of using spoken narrative to set up the mood. I have a criticism about that though, parts of the game are funny (I lol'd at the title, ending and game over screens) while the main gameplay part has a dense, serious mood. I found that kind of inconsistent, the game could have easily been one of my favorites in the "mood" category due to the audio, but the fact that you chose to use a lot of jokes made the otherwise beautiful mood less intense.

Anyways, congrats on your game, I had a good time collecting other planets =)