A Familiar Story by Breakdance McFunkypants

[raw]
made by Breakdance McFunkypants for MINI27 (COMPO) 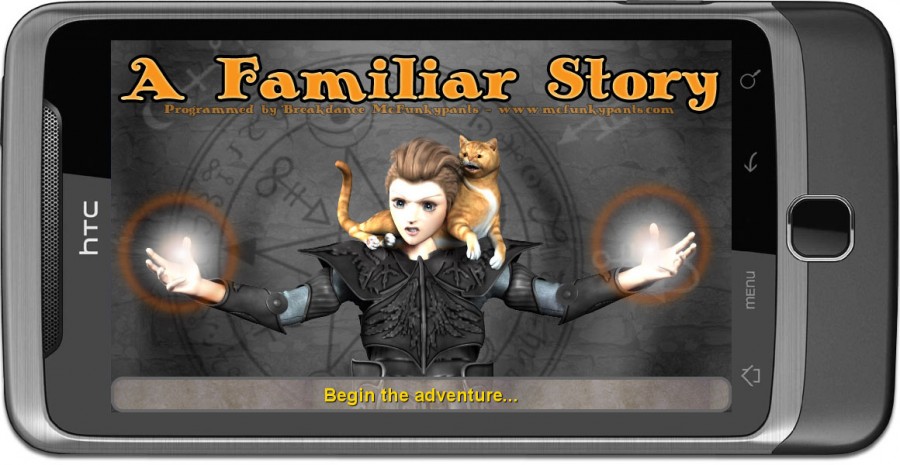 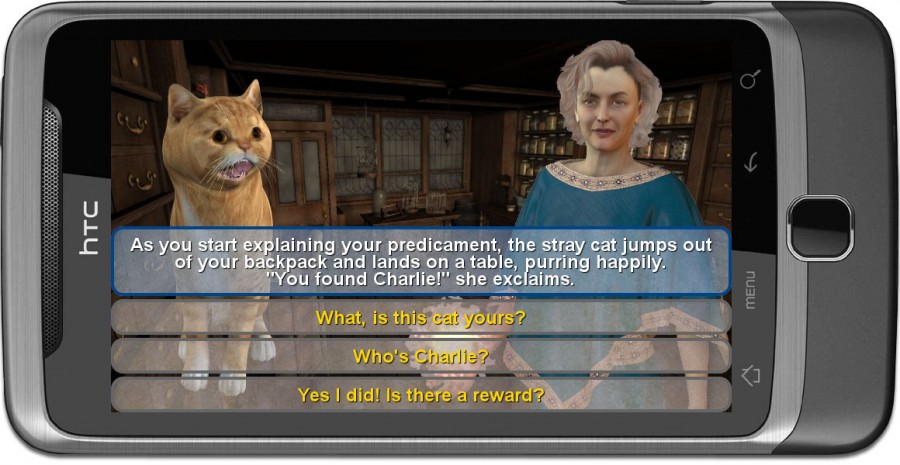 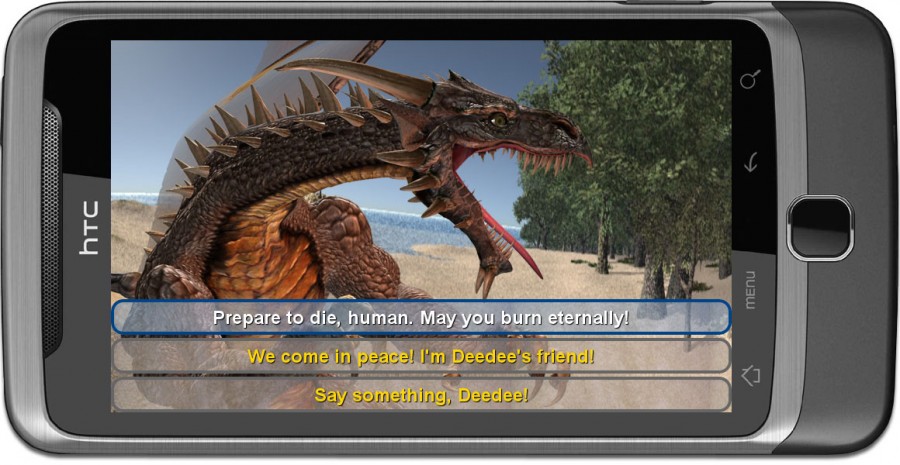 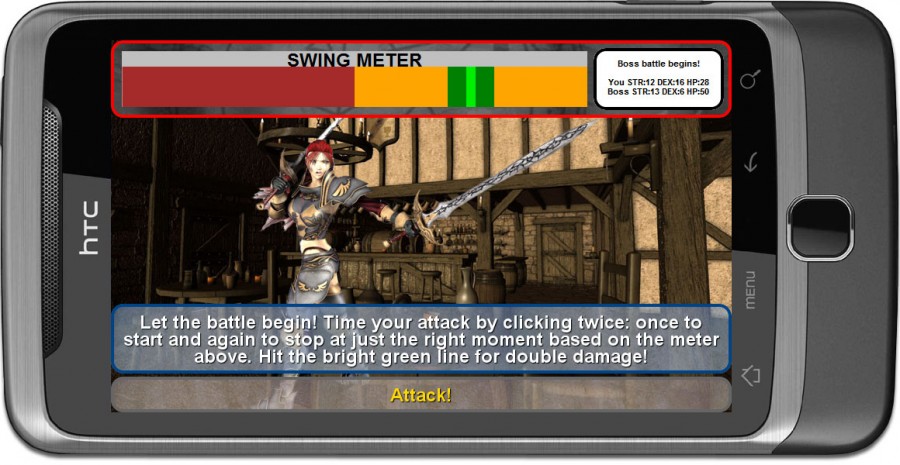 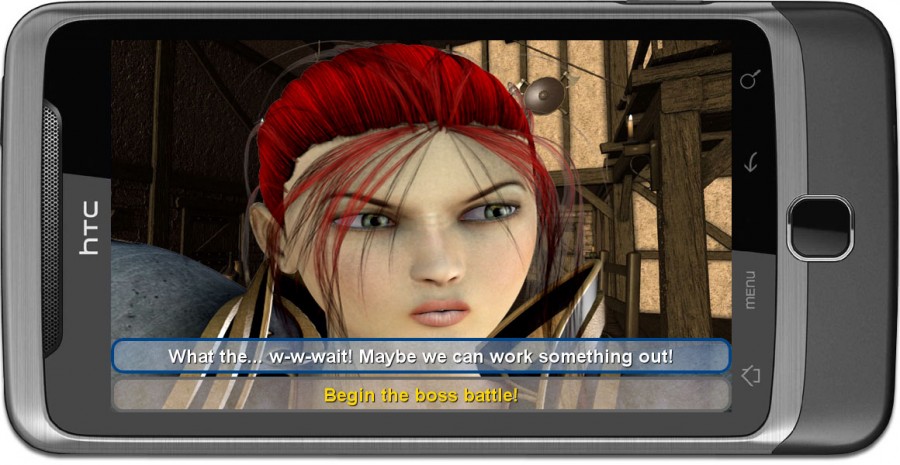 "A Familiar Story" - a visual novel by McFunkypants - www.mcfunkypants.com - Copyright 2011

Follow the adventure and friendship between two lonely young heroes. From humble beginnings, their partnership are all that the world needs to save them from an evil tyrant. Recruit allies and meet people and creatures along the way toward the boss battle. A "familiar" is a magic animal companion, such as a witch's black cat. Familiars are used to boost the magic strength of their companions and have a history of being valuable allies.

This was created using art that I'd made previously. I created all the avatar art (cats, dragons and people) using Poser Pro 2010 and DAZ art assets. Most of the backgrounds were created in Vue 8.5 xStream.

I decided that my challenge for this weekend would be to build my first MOBILE game. Using Phonegap and jQuery, I created the entire game in HTML.

Using Eclipse to compile a simple .java class, I packaged phonegap and my html sources into a non-signed Android .APK which is designed to be used on phones like the HTC Desire, or any Android 2.2 device with 800x480 resolution. It might also work on tablets and older phones as well. Because it isn't a signed .APK, it is not yet ready for prime-time (it wouldn't be allowed to go on the app stores, and you need to enable "debug mode" on your phone and "allow unsigned apps").

For the Windows .EXE, I used Appcelerator Titanium to create a stub executable which is really just a chromeless web browser (using a variant of xulrunner).

For the web version, all I had to do was upload my HTML sources to my web server. The sound is done with soundManager2, which can use HTML5 audio but generally sticks with more reliable invisible Flash.

Although this is a very simple game right now - just some conversation and one battle - I am very proud of what I accomplished. As a tech demo for a future, more advanced RPG or visual novel, I think this is a great start. Perhaps I will flesh out the adventure, add a few more characters, implement game saves and inventory and a quest manager and craft a more robust RPG game like I've always dreamed. Who knows?

In any case, it was really fun working on this. Hope you enjoy it!

Mreeeow!
Goldendice
28. Jun 2011 · 06:23 UTC
Fun game. I was disappointed when I played through a second time to see if my choices made a difference (I found some more scenes, but they didn't really), but it was nice to have some sense of control even while being led by the hand.

There seemed to be a glitch in the web version where, if you played through twice in a row, you automatically win the boss battle.
Winterblood
28. Jun 2011 · 11:31 UTC
Boss battle was an interesting idea, although I didn't feel like I was getting hit back - just hit her three times and won...nice to have the additional mechanic though.
RyanMan56
28. Jun 2011 · 14:26 UTC
Great game, graphics were great and the story was brilliant. Well done! :)
🎤 Breakdance McFunkypants
28. Jun 2011 · 16:37 UTC
Wow guys, thanks so much for all the kind words. In future versions I hope to flesh out the choices some more, improve the boss battle (make it harder), and offer more plot branches so that your choices have more impact: multiple endings, etc. My plan is to add several chapters to the story, tons of different battles, and create a proper Android and iOS app out of this.

Please keep the comments and suggestions for improvements coming!
rhockman
28. Jun 2011 · 23:33 UTC
I worked in a project a couple of years ago in wich we used poser for the characters. I'm still having nightmares with them. ;)
It was fun to play, I liked having a cat in my party even more than a Dragon. I would like to se how it evolves :)
Radiatoryang
30. Jun 2011 · 21:53 UTC
I like the characters' poses. Also appreciate the technical explanation. I had no idea who the villain was, though, or why I'd want to defeat her.
23
01. Jul 2011 · 03:52 UTC
Solid game! Nice twists, and I've rarely seen a cat wink so charmingly. Besides seeing things fleshed out a bit, one thing you could do is load the images before blitting them - particularly at the start of the game the flip to grey and drawing in the picture was a little distracting.