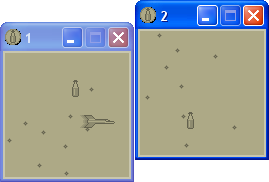 'Milk!' is a game where you must move one of two windows to guide a spaceship through the Milky Way galaxy. When the spaceship flys out of one window it appears in the window right of the first one. You will die if you don't arrange the windows right. To increase your score you can collect unimportant milk ;-)
Avoid bombs or they will destroy your spaceship!
I first wanted to do it 128x128x128 but 128 windows were too confusing so i made it 128x128x2 (:
The design was inspired by a Palm IIIxe display.


Details:
Music/Art/Concept/Programming - everything was done in 5 hours.

Thanks for 313 Downloads and feedback :)
('Milk!' is the most downloaded game i ever made :D)
I am going to work on a new post-compo version with more gameplay, better graphics & sounds, and more windows with an increased size :)

Would be fun if the ship could change direction and go up/left/down as well as right.
madflame991
20. May 2012 · 18:46 UTC
WOW!!! I can't believe I'm playing a game made in AutoIt :) (My first few games were too made in AutoIt - I loved the language, but it's soooooo not for making games)