[raw]
made by anachrocomputer for MINI34 (-) 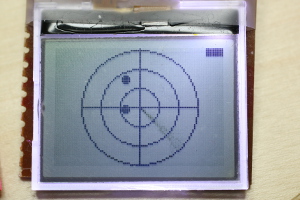 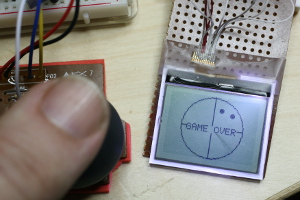 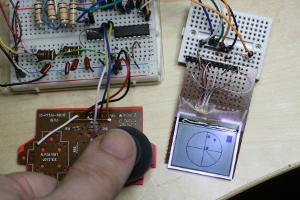 OK, so this is going to be a tricky one for people to download and try out! It runs on an Arduino microcontroller board connected to a Nokia 1202 mobile phone display and an analog thumb-joystick. The downloadble files are the source code (or "sketch") in Arduino's C language. The resolution of the LCD is 68x96, but the game only really uses a 68 pixel circle in the middle of that. It's a radar scanner game, where the radar is a bit of a joke (hence the name), and some of the targets actually improve it, like power-ups.

I really can't call this a finished game, although it does display an ending when the timer runs out. Lots of ideas for other power-ups, like a faster scanner. Lots of other things it could do, like booby-trapped targets or moving targets. The controls could be added to, simply by connecting some buttons to the Arduino.

All in all, it was a fun little project and I've come across a few surprises along the way. Such as, how fast the GCC 'sin' and 'cos' functions are on the Arduino (which is a 16MHz 8-bit RISC chip). And how slow my integer circle drawing routine is in comparison! The LCD response time turned out to be quite slow, which meant that the scanner goes quite slowly (otherwise it gets too faint).

There are comments in the source code too -- enjoy!

matthias_zarzecki
30. May 2012 · 15:48 UTC
Well, this is amazing. The choice of platform that is, and the accompanying balls since nobody can play this :)

A gameplay-video might be a good compromise. Show off the hardware & gameplay, make people understand what it is actually about.
🎤 anachrocomputer
01. Jun 2012 · 22:40 UTC
Making a video is an excellent idea! I'll do that once I'm back home after the Maker Faire. Which reminds me -- if you're at the Derby Mini Maker Faire, call in at my stand (I'll be demoing the pen plotter) and try the game there!