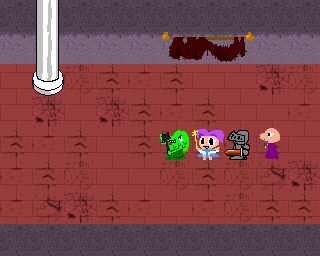 My submission for LD40. You play the final level of a forgotten PS1 RPG, without any knowledge of what anything in the game means. What the hell is "Swfl. Pot."? And did the translator pass out halfway through or what?

Unfinished and unpolished. Most of my comedic/meta-narrative points had to be relegated to textboxes. And if you choose to 'flea' from your enemies, you better make sure you can pull it off, or else the game freezes when you try to attack.

It's ironic, then, that by trying to make a game so unenjoyable due to overly complex rules, I ended up attempting too many things a once, hurting the final product? That deserves some points for, like, meta-ness or something.

Sholf
04. Dec 2017 · 15:49 UTC
I love the meta aspects in this haha, especially the fake intro screens at the start. This would've definitely been amazing if you finished it since the concept is hilarious. The music is actually really good and the "bad art" is kinda charming.

It's also nice to see a fellow GMStudio1 user haha. One thing I would suggest is to turn off the pixel interpolation in the global game settings, that'll make your game more crisp and a lot less blurry.
Billeclipse
05. Dec 2017 · 18:56 UTC
Its really good game :D The menu is nice although for some reason it had a little bit of lag at least on my end... Of course the graphics needs a little bit of work but i completely understand it cause of the time given. Overall its like i said a really good game with that fun old school rpg style :P
alottabit
06. Dec 2017 · 04:02 UTC
It's a shame you didn't have enough time to implement more pieces - your humor in all the 'unimplemented' dialogs was spot on. The graphics fit the mood perfectly too, nice work!
🎤 niterich
06. Dec 2017 · 23:09 UTC
Thank you @sholf, @billeclipse, and @alottabit for your kind words and feedback. I'll certain keep it all in mind if/when I expand on it. I really liked all of your games as well. Best of luck in the compo!
pkenney
07. Dec 2017 · 02:16 UTC
Meta-ness points achieved! Initially I assumed the Swfl. Pot. from the game description was going to be a potion. A swiffling potion I guess? But after seeing it in context in the game I now think it's potential. Um... Sword-flinging potential?

I think I explored all the nooks in the menu system, and I wasn't sure it was even going to have combat but oh boy did it ever! I even got to kill Supersatan (or *a* supersatan, anyway).

Come check out my game if you like!
https://ldjam.com/events/ludum-dare/40/virus-detected
karln
12. Dec 2017 · 20:26 UTC
Really nice opening screens and gameplay implementation as far as it went. Shame you didn't have time to make it what you wanted. I stopped after the first encounter, wasn't sure if there was going to be a boss or something but the first fight went on so long I didn't think I could face another :/
🎤 niterich
12. Dec 2017 · 22:17 UTC
Thanks to everyone who voted on my game. I've reached the 20 votes needed to qualify! And a special thanks to everyone who commented here as well!

And to @karln: That was probably for the best. There's no boss or anything, just an overworld, some menus, an unbalanced combat system, and a really crappy game over screen.
dodormeur
13. Dec 2017 · 20:45 UTC
I don't exactly know what to think O_o this is both weird, charming and strange at the same time ^^
This is impressive to make in a ludum dare, but i really don't know what to think X)
Shivur
13. Dec 2017 · 20:46 UTC
Original concept to make "preplayed" games.
Acr515
17. Dec 2017 · 14:56 UTC
Really loved this game! Great, funny concept, though I would suggest making the standard battles a little shorter, and also implementing death would've been nice, too. Please finish this
aeveis
19. Dec 2017 · 05:38 UTC
Liked the concept! I don't think I was able to make it out if I got in a battle, but if the humor is more of the main point, perhaps having it so you can kill the enemies relatively easily (as a way to learn the systems or get more humor about the kind of moves you use). I liked the setup so far with the select and loading screens though. Keep up the good work!
cptalbertwesker
22. Dec 2017 · 11:32 UTC
For waht you got put together it's pretty impressive, I liked that you had a message in place for hopeful people like me that really wanna see some options :P I really liked your battle system, would have been far easier for you to have put this together in something like RPG Maker, but you used GM so I commend you!
knarf
23. Dec 2017 · 18:59 UTC
That was funny :) I won some battles found a secret passage behind the casket but i gave up after a while... I liked your interpretation of the theme, felt less alone about how ironic it turned... I loved all the small funny things that you managed to put together. sprites are a bit raw of course, great work on UI and retranscribing these old school RPG games feeling ! I opened the project to cheat and go to the end (?) directly but I ended searching text to find all the jokes :) Good job ! Cheers !
Omiya Games
25. Dec 2017 · 22:17 UTC
Unfortunately, the game seems to crash far too often for me to give any proper ratings for this game, but I do want to say I'm impressed with what you have. I also love the premise of glitching your way past the end-game of this epic JRPG.
Querk
26. Dec 2017 · 23:05 UTC
Nice Game. I like so much Graphics and climate.
That was funny :)
good job :D