SUSHI IS FISH + RICE by SimianLogic 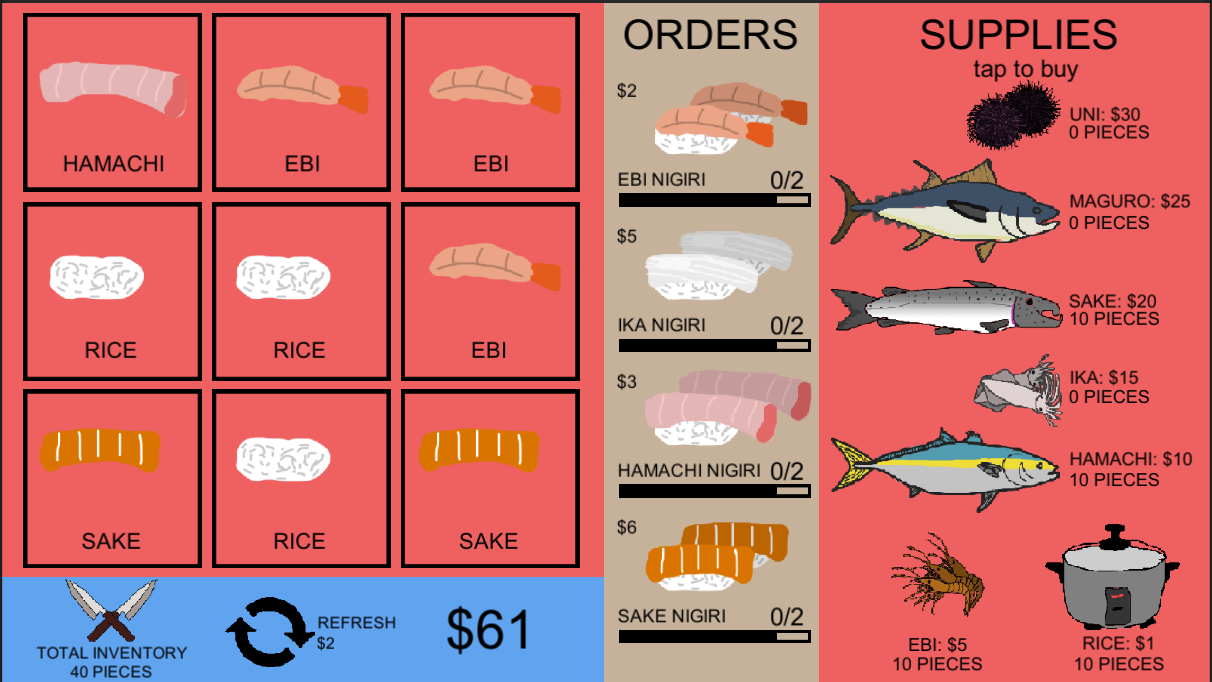 I only had Sunday to jam, so I spent most of Saturday thinking about incompatible genres. I don't think deckbuilding and cooking are inherently incompatible, but the folks who usually play deckbuilders (fairly hardcore) and the folks who usually play cooking games (fairly casual) are in pretttttty different buckets. I originally sketched out a deckbuilding + farming game, but it turns out combining ingredients is a hell of a lot easier than sequentially going through seed -> water -> harvest lifecycles. And in terms of ingredients, Nigiri is pretty dang easy (1 fish + rice).

I didn't get quite as much of the deckbuilding in as I wanted (I wanted some utility cards to affect the state of the "board" and make it a little more strategic), but overall I'm pretty happy with what I managed to get in with about 11 hours to jam. If I'd had more time I'd like to add:

It's fairly hard right now -- the goal I set myself was to get to $250 as a "game over" but that might actually take awhile.

Ooops realized there's a real game called Sushi Go so typing dumb things like Sushi Build Go is probably not so good. Renamed to the just as dumb "SUSH IS FISH + RICE"

Jimbly
04. May 2018 · 14:27 UTC
Nice game! A little sound or visuals when an order was properly filled (since I'm never looking at that part of the screen when I'm frantically clicking) would have gone a long way to improving the feel, I think. When deciding what cards to draw, did it bias towards giving you rice if you had none on the board/in hand, or was I just getting really lucky? =)

I didn't seem to make much progress, ended up at $77, which I think is less than I started (though I did have a bunch of cards in hand). Perhaps always buying rice too late every time, effectively for $3, was hurting my profits :). I think if the profit margins were a little bigger it would have left me feeling like I was accomplishing something, and not just treading water.

Eventually the game got stuck - I could select cards, but it would no longer make sushi. I think maybe I had a card selected when I clicked Refresh.
mrPenguin
04. May 2018 · 15:34 UTC
I think this game has too much code and is not meta enough and not a board game enough for me, I guess I'm being too much as a kid wanting new things and exploring other Ideas than the traditional windows games that everyone is doing, not edgy enough for me...
<3

I've played and besides the art is very developer art, and made me cry a bit, the game could be more intuitive, specially on which thing is what when cooking (i.e. add the ingredients to the recipy instead of having to guess it by the name) Also When I buy one thing I get X of those, and I would like to know how many of each. It's "cookie clicker" mechanic is engaging anyway, and is one of those places where with better graphics I would probably spend lots of time without even realizing xd
mrPenguin
04. May 2018 · 15:37 UTC
Also you may want to check https://ldjam.com/events/ludum-dare/41/christmas-tree that has a bit of code (still not a lot, but plain c++ without engine or anything (using SFML)) :)
Aszu
04. May 2018 · 15:45 UTC
Great game!
I think this was the game i most enjoyed to this date. hahaha

this ^ was my score when i stopped. I thought 250 was the goal, now i properly read that there's no gameover yet. So yeah, it needs a goal, otherwise one gets bored.
But the mechanics are great, the order's time seems balanced, profit is not bad too, i liked it very much. Hope you'll expand!

also, you needed some music and sfx to get a better mood :stuck_out_tongue_winking_eye:
niterich
04. May 2018 · 16:46 UTC
For only having Sunday to work on it, I think you did a really good job. The basic mechanic of buying enough materials to satisfy orders but not too much to clutter your inventory added an interesting twist to the game.

As someone who doesn't like sushi, I had a lot of difficulty telling which fish to buy on sight alone. What do you mean the yellow meat comes from those black urchins?
differentname
09. May 2018 · 20:53 UTC
It's fun for such a simple game. Clever way of using deck building. Of course a little visual feedback would be good when I successfully fill an order or make an item that's not going to anyone, but who has time for that?
RockhopperGames
10. May 2018 · 16:53 UTC
A shockingly well realised genre combination! The name and concept struck me immediately and as I continued to play, I was amazed how much the theme of running a restaurant fit with the mechanics of deckbuilding. This is a superb game, and you should be proud of what you accomplished here!