[raw]
made by niterich for Ludum Dare 46 (COMPO) 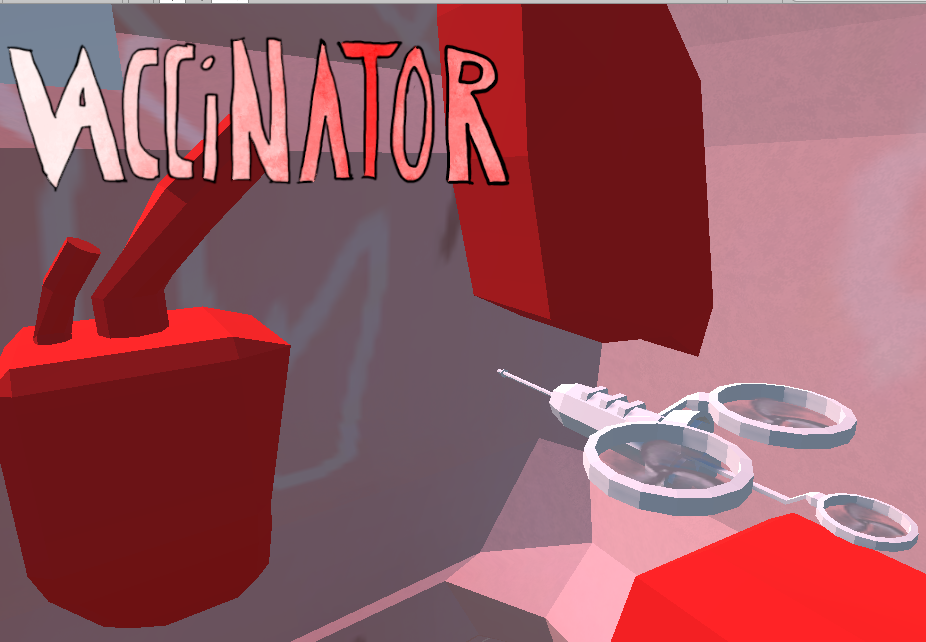 Fight off incoming viruses in this 6DOF shooter!

Pilot the fantastic ship Vaccinator with total freedom as you blast away incoming viruses! Medication periodically comes in (both orally and ...suppositorily) to completely heal all organs! Remember, you can live with only one kidney and one lung!

P.S. I forgot to program your health so you can't actually die

it took a while to figure out how the map worked and aiming was a bit hard from far away.

that being said i enjoyed playing it once you figure out your orientation and where things are the game is alot of fun!
🎤 niterich
20. Apr 2020 · 17:13 UTC
@west Thanks for the feedback! I myself had troubles orienting myself, that's why I hastily added a white spine to orient from front to back (upon reflection, different coloured organs would probably be more effective... oh well)
A-312
20. Apr 2020 · 20:54 UTC
Does Gamepad are supported ? Only left joystick on gamepad works (to replace wasd but I doesn't have w & e)

~~It was funny to try to fire with a joystick, I got a laser :sweat_smile:~~

![gull (9).gif](///raw/3a3/c2/z/2e40c.gif)
🎤 niterich
20. Apr 2020 · 23:44 UTC
@a-312 I'm afraid my game was only designed with QWERTY keyboard + mouse input in mind. At least you got a pretty hilarious bug out of it!
smilewood
21. Apr 2020 · 01:34 UTC
Quite a fun little shooter. I liked the concept of defending the organs, and I thought the design of the whole area was well done, and the aesthetic of the game was great. I personally found the controls to be unintuitive, I kept hitting Q and E expecting to roll, at least the beginning. Overall I did not find move up and down to be that helpful as controls, my instinct was always to just aim up and move forward. Once I got the hang of the controls moving around felt nicely fluid. Nicely Done!
🎤 niterich
21. Apr 2020 · 18:32 UTC
@smilewood Thanks for the feedback! I figured people would find moving to be more helpful than rolling, so I based the controls on Unity's camera fly-through mode. I'll keep that in mind when I come back to this kind of control scheme!
-banzi
21. Apr 2020 · 20:07 UTC
An interesting game. I think that the concept of flying inside someones interal organs is quite unique :D.

It was hard to to shoot, I wasn't sure where I am shooting and if I am hitting something or not. What I was also missing what made the flying bit weird at the start was some top and bottom. Maybe if it would be somehow better explained where it the player's head / bottom?

Anyway qute interesting game and works well with the sound and effects. Well done!
rand_dev
22. Apr 2020 · 15:42 UTC
Neat little game. The gameplay is enjoyable and the decision to show the controls on screen once you start make it more acessible.
gwinnell
22. Apr 2020 · 20:45 UTC
Love the 6DOF controls, the music, and it fits the theme very well! Is there a win condition? My only negative with the game is I couldn't orient myself very well to see which organ to go to which was being attacked. I know you've said different organ colours is a solution, but putting the player position on the "body" minimap would work too. May also concentrate on 'game feel' in your next game, I guess I also couldn't tell when my bullets were hitting the enemies - hit particles, a flash effect or a simple scale/tween on the object would have worked well. Hope that helps!
🎤 niterich
22. Apr 2020 · 23:37 UTC
@gwinnell Thank you for the feedback! No, unfortunately I didn't get around to adding a proper win condition, so I guess you just have to take solace in how long you survive each time. I did try to improve my gamefeel for this jam, but it seems like I still have a ways to go! For what it's worth, there are hit particles, they're just the same as the player's so they're hard to see.
Elektroney
25. Apr 2020 · 22:12 UTC
Long time no see. i really dont know what i should say but great job it felt really responsive not like my games with a little bit of squish
Bajtix
28. Apr 2020 · 08:47 UTC
I like to do
barrel
SomethingWithEd
28. Apr 2020 · 13:42 UTC
It is fun little game.
cheesepencil
30. Apr 2020 · 01:25 UTC
Descent meets Body Wars, cool! Great job for compo! I wish I had more indication that my shots were actually hitting the virii but that's a small complaint on an otherwise great compo game. good job
AdonisDevs
30. Apr 2020 · 03:52 UTC
The flying was super fun! I think if you just added a high score and better assets, this would be so addicting to play :D
IDidGame
06. May 2020 · 06:35 UTC
hell yeah a 6dof shooter, now theres an underrepresented genre in gamejams
gameplay is fun and combined with the catchy bgm it kept me playing for quite a while
upping player shot speed a bit or decoupling them from player speed might have been good since its hard to hit enemies at a distance and while strafing, thats not a dealbreaker for me though since i enjoy the 6dof movement
kristinamay
12. May 2020 · 02:41 UTC
It was fun zooming around, and I liked the music. I couldn't quite figure out what I was supposed to shoot at... but I did like flying. I think I just shot a bunch of organs instead. :grimacing:
Chaseplays
12. May 2020 · 09:58 UTC
This was fun! The flying controls felt great, and I really liked your take on the theme! The audio, specifically the music, was fantastic as well. Great job!